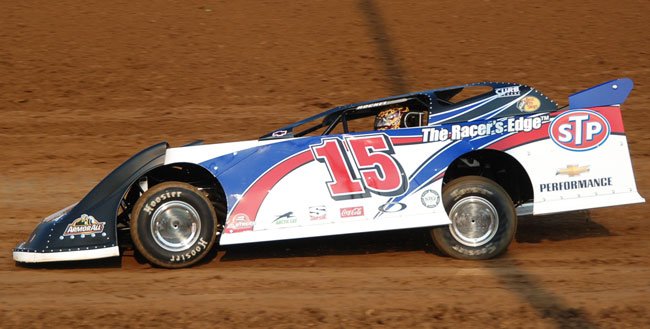 Schatz Charges to Top Five in First Prelude to the Dream

ROSSBURG, Ohio — June 6, 2012 — Eldora Speedway is anything but new to Steve Kinser and Donny Schatz.

The Tony Stewart Racing drivers have combined for almost 39 World of Outlaws feature victories, nine Kings Royal wins and three Historical Big One titles at the high-banked, half-mile oval, which presented a unique challenge on a near perfect Wednesday.

The duo made their debut at the 8th annual Feed the Children Prelude to the Dream, a late model charity event hosted by their boss – NASCAR star Tony Stewart – and presented live on HBO via Pay-Per-View.

Here are the in-depth details on each segment in chronological order for Kinser and Schatz in their first-ever late model race:

Kinser and Schatz each tested prior to the Prelude to the Dream, but neither spent a significant time behind the wheel of the stock cars.

Kinser’s testing session was cut down to a handful of laps because of mechanical issues, which forced him to learn on the fly during the event.

“Been a lot of laps around this track, just not in a late model,” he said at the prerace media session. “It’s all going to be relatively new to me.”

Schatz was able to create a few more laps, testing at his family owned track of Red River Valley Speedway in Fargo, N.D., and during breaks at a recent World of Outlaws Sprint Car Series race at Lawrenceburg Speedway in Lawrenceburg, Ind.

“I got a lot of the butterflies out,” he said. “I’m not Tony Stewart. He can jump into anything.”

All of the drivers had two hot-lap sessions with the track dramatically slowing down for the second time around. As it slicked off, the times slowed by more than half a second.

However, Schatz and Kinser each had top-10 times in each session. The duo recorded their best lap of the first session on the seventh circuit, which was the latest among the competitors.

Schatz, whose time of 15.730 seconds was the third quickest in the first session, said his crew made an adjustment to the right front shock to make the car more maneuverable for the second session.

“The car felt way better,” he said after being eighth quickest in the second session. “I didn’t give it everything it had. I don’t want to tear the fenders off in hot laps.”

Kinser, who was ninth quick in the first session and 10th fastest in the second, said he still wasn’t completely comfortable behind the wheel.

Schatz drew the No. 1 in the qualifying draw during the drivers meeting, which put him on the track first for the two qualifying laps.

He ended up 16th quickest with a top lap of 16.881 seconds – missing the inversion by four spots.

“I didn’t make very good laps,” he said. “I think (the track) might have cleaned off in the middle (throughout qualifying).”

Kinser, who went out 12th, was 17th quick at 16.947 after getting sideways on the first lap of qualifying.

“I got sideways coming off of four and messed both laps up,” he said.

Both teams took big swings at adjustments prior to the heat races, which Schatz started fourth in the fourth heat and Kinser fifth in the first heat.

It was a tale of two different heats for Schatz and Kinser.

Schatz fell to sixth on the start before two cars crashed in front of him on the opening lap, restarting him fourth. He challenged for third most of the race before second-running Dave Blaney sustained a flat right rear tire with two laps remaining, moving Schatz to third and bunching the field together.

Schatz capitalized on the restart entering turn one as he snagged second, which is where he finished.

“The restart helped us a bunch,” he said. “Every time we’ve hit the race track we’ve been better.”

Kinser drove to fourth early in his heat race before getting caught in the middle, dropping him to sixth. He was able to make a last-lap pass for fifth place.

The heat results lined up Schatz eighth and Kinser 17th for the main event.

Schatz climbed out of his late model, showcasing a huge smile as he surveyed the damage.

The World of Outlaws champion survived a handful of collisions, including being slammed into on the third lap, to record a fourth-place finish in a race featuring stars from NASCAR, IndyCar and NHRA among others.

“The race car really came to me and the race track cleaned off,” he said. “They’re pretty tricky to drive. It takes a while to get used to.”

After being involved in the early crash – he was ran into from behind while dodging the spinning car of Ty Dillon – Schatz rebounded in the second half of the race. He dropped to 14th on lap four, but regained a spot in the top 10 by lap 15. Seven circuits later he drove into ninth and restarted eighth after leader Kasey Kahne was involved in a crash on lap 25.

Schatz maneuvered his way to sixth by the backstretch on the restart and slid Ryan Newman for fifth place in turn four of the 27th lap. Ten laps later, Schatz drove around Cruz Pedregon for fourth place.

“It’s a good thing they are stock cars and have fenders because I think I hit everything,” Schatz said. “It was challenging, but they were fun to drive.”

Kinser didn’t fare as well after an early crash. He was caught up in a seven-car accident on the frontstretch of the second lap, which ended his night 25th.

Kyle Busch won the Prelude to the Dream with Stewart second and Austin Dillon third. Newman rounded out the top five.

Schatz and Kinser will return to action with the World of Outlaws on Friday at Clay County Fairgrounds in Spencer, Iowa.