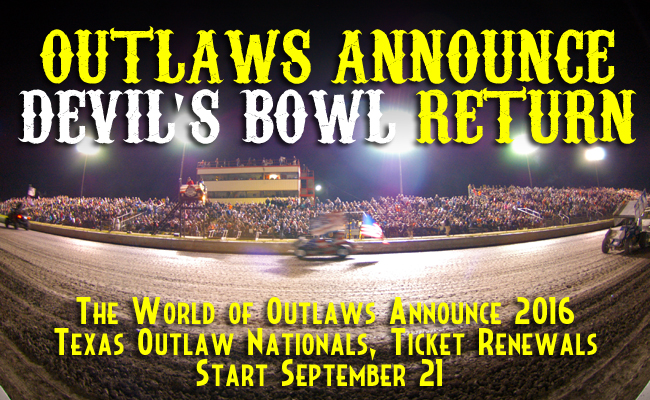 The new, annual tradition features two complete nights of racing action on the banked, half-mile oval in Mesquite with a Texas-sized purse totaling more than $100,000 for the weekend.

“The Texas Outlaw Nationals is a connection between our past, present and future,” said World of Outlaws CEO Brian Carter. “Returning to Devil’s Bowl for this new annual tradition is an exciting homecoming. Series founder Ted Johnson started the series with a vision to make it the Greatest Show on Dirt and today his vision lives on through more than 90 annual events across the United States and Canada.”

It is the six-time series champion Donny Schatz though who leads the Outlaws’ return. In the last three appearances since 2014, the Fargo, N.D.-native has two wins.

Ticket renewals start Monday, Sept. 21 at 9 a.m. (EST) while tickets go on sale to the public on Oct. 22. A special fan bonus will allow access to the pits with a “Fan Pit Pass” available only with tickets purchased in advance.

For more information on the Texas Outlaw Nationals, click www.WoOSprint.com or visit www.DevilsBowl.com.