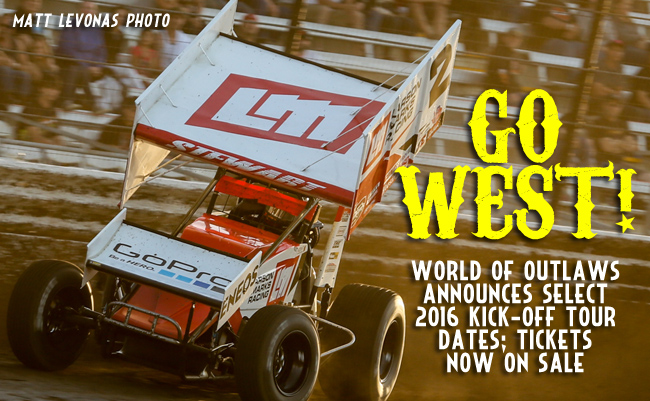 Tickets are now on sale for select events in California as well as events at Federated Auto Parts Raceway at I-55, Lincoln Speedway, New Egypt Speedway and Lernerville Speedway

New to the schedule in 2016 after multi-year absences are Royal Purple Raceway in Baytown, Texas, Ocean Speedway in Watsonville, California and Bakersfield (Calif.) Speedway.

The Outlaws last took to the 3/8 mile oval at Royal Purple Raceway in 2011 while Ocean Speedway last appeared on the schedule in 2008. Bakersfield returns after a decade-long absence.

“As the 2016 World of Outlaws Sprint Car Series season fast approaches, we are excited to return to great race tracks like Ocean Speedway, Bakersfield Speedway and Royal Purple Raceway,” said World of Outlaws Sprint Car Series Director Carlton Reimers. “While the off-season is still young, we can’t wait to get ‘The Greatest Show on Dirt’ back in action.”

The series takes on weekend destination events in California at Thunderbowl Raceway, the Stockton Dirt Track and Calistoga Speedway. Brad Sweet presents the Placerville Short Track Outlaw Showdown at Placerville Speedway returns in 2016 on March 23 and the Outlaws take on the Mini Gold Cup at Silver Dollar Speedway on April 2.

The previously announced FVP Outlaw Showdown at the Dirt Track at Las Vegas moves to Thursday and Friday, March 3 and 4, 2016 to better coincide with the weekend’s events at the Las Vegas Motor Speedway.

In addition to select California dates and the Las Vegas event, tickets are on sale today for the Spring Classic and Ironman 55 at Federated Auto Parts Raceway at I-55, the Gettysburg Clash at Lincoln Speedway, the Silver Cup at Lernerville Speedway and the Jersey Outlaw Classic at New Egypt Speedway.

Additional dates will be added to the schedule below. The remaining 2016 World of Outlaws Sprint Car Series schedule will be announced during the Performance Racing Industry (PRI) Trade Show on Thursday, December 10.