One Night in Perris 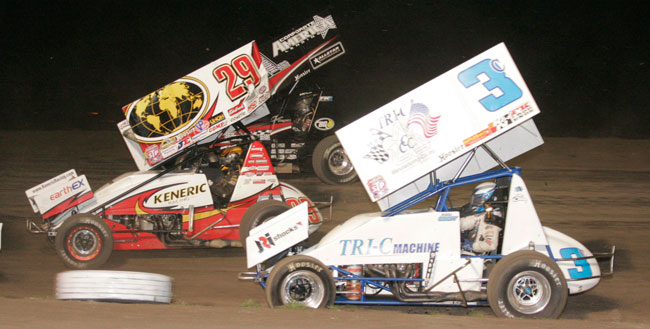 PERRIS, Calif. — April 3, 2013 — According to the trend, a first-time winner should stand atop the podium when the World of Outlaws STP Sprint Car Series visits Perris Auto Speedway.

After Mark Kinser claimed the first five races at the half mile, seven of the last eight events – and the last five consecutive – have featured a different winner heading into the SoCal Showdown on Saturday, April 13.

One of those drivers is Kerry Madsen, who picked up a victory in 2007 and finished fifth during last season’s return to Perris Auto Speedway after a five-year hiatus.

“It’s an enjoyable track for me and I’m definitely looking forward to Perris,” he said. “It suits my style. It races like a 3/8 (mile). It doesn’t really race like a half mile. You’ve still got some speed on the straights and the corners are kinda tight and it builds a pretty nice ledge.”

“Last year I was fortunate enough to get a win at Perris,” Saldana said. “I love coming out here to the West Coast, definitely at the beginning of the year and definitely in September. It’s fun just coming out here; it’s a great atmosphere. All the fans really support sprint car racing.”

Daryn Pittman, Craig Dollansky and Johnny Herrera also have wins at Perris Auto Speedway, and Danny Lasoski is the only driver besides Kinser with multiple victories.

Tickets can be ordered online by clicking WorldofOutlaws.com/tickets or by calling 877-395-8606. Fans who purchase an advanced reserve seat all can receive a FREE fan pit pass.