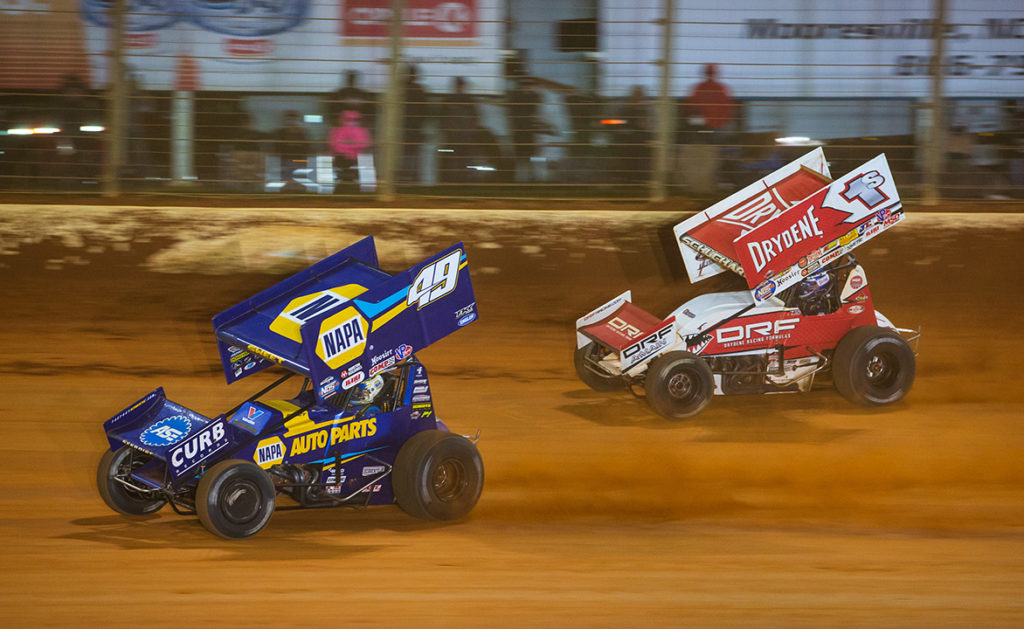 “We overcame a lot of adversity to have four DNFs and to still win the points,” said Sweet, of Grass Valley, CA, about his 2020 season. “I thought we showed our resilience this week and we came here and executed, I thought, perfectly.

“We did everything we needed to do to win the points and get Kasey Kahne Racing the team championship. Hats off to our competitors. Logan (Schuchart) gave me a good run for my money all season long and the 41 (Jason Johnson Racing) bunch… nothing but respect from all of us here. Obviously, we want to win and stay on top of the mountain.”

Schuchart and his Shark Racing team kept the pressure on Sweet for the championship all year long. The two swapped the points lead twice during the season, but Schuchart’s effort came up short Friday night at The Dirt Track. By Sweet finishing ahead of him, the reigning champion secured enough points to clinch his second consecutive title.

However, that did little to diminish Schuchart’s hunger for another win. His last trip to Victory Lane was in September. So, with a championship mentality no longer needed, Schuchart went full king shark Saturday night.

“We came into this weekend saying we just wanted to end strong,” said Schuchart, of Hanover, PA. “We knew certain things were out of our control. Last night was a challenge, but we made up for it a little bit. To end the World of Outlaws season with a win is awesome.

“We weren’t able to get the champion. But fifth last year and second this year (in points). This Shark Racing team is coming. We’re going to continue to try and get better and move forward.”

Sweet was the early contender for the win, claiming the pole for the Feature and led the three opening laps. But Schuchart had the NAPA Auto Parts #49 in sight the entire time, waiting for the perfect moment to strike. With a run down the front stretch, Schuchart pulled the trigger and shot a slide job underneath Sweet into Turn 1 and cleared him for the lead by Turn 2.

From then on, the Drydene #1S held command out front. Sweet closed on him in traffic but could never get close enough to attempt a pass.

“I wish I wouldn’t have lost the lead to Logan because I felt like the way the race played out I never really got another great opportunity to get by him,” Sweet said. “Just started out the race just a little off. But it came to me. I felt like we were just as good as Logan in open air. And that says a lot, because he’s usually really good at this place.”

Aside from trying to run down Schuchart for the win, Sweet still had a championship to worry about, other than his own. His Kasey Kahne Racing team entered the night 22 points ahead of Jason Johnson Racing. And JJR’s driver David Gravel didn’t help ease the pressure off Sweet throughout the night.

Gravel set overall Quick Time for the second night in a row and beat Sweet for the win in their Drydene Heat Race. By the luck of the draw, Sweet started on the pole for the DIRTVision Fast Pass Dash and won, claiming the Feature’s pole position. Gravel finished fourth.

In the Feature, Gravel stole third on the first lap and kept Sweet in sight throughout the entire event. Gravel could close on him after a restart, but Sweet pulled away over time in clean air. To have any shot at bringing JJR the team title, he needed to beat Sweet and hope that “The Big Cat” fell at least 11 positions behind him.

He came up short on that goal and ended the season with a third-place finish.

“I knew we had a chance (at beating Sweet),” said Gravel, of Watertown, CT. “Just lacked a little bit there. We were pretty good, but Brad and Logan were really really good there. We could hang with them on the restart and I had some good runs and Brad made a move and blocked my lane. That was kind of my only chance.”

The race was also Gravel’s final drive behind the wheel of the JJR #41 car. He’ll join Big Game Motorsports in 2021 for a championship run.

Ten-time Series champion Donny Schatz ended the night with a sixth-place finish and ended the year third in the championship standings. That breaks his 14-year streak of finishing first or second in points.

Sheldon Haudenschild had a career best season, finishing fourth in points with a career-high seven wins in a single season. Carson Macedo also had a new career achievement by finishing fifth in points with Kyle Larson Racing. Macedo will join Jason Johnson Racing in 2021 as KLR closes this year.

The Last Call was 2013 World of Outlaws champion Daryn Pittman’s final race as a full-time Series driver. He capped off his career with a ninth-place run at The Dirt Track and finished seventh in the championship standings.

Now, with the 2020 season completed, the World of Outlaws will look to 2021 and, again, open the season in February at Volusia Speedway Park for the DIRTcar Nationals. A new beginning to Sweet and Schuchart’s budding competitive tale.

The World of Outlaws NOS Energy Drink Sprint Car Series will kick off the 2021 season Feb. 5-7 at Volusia Speedway Park for the DIRTcar Nationals. For tickets, click here.