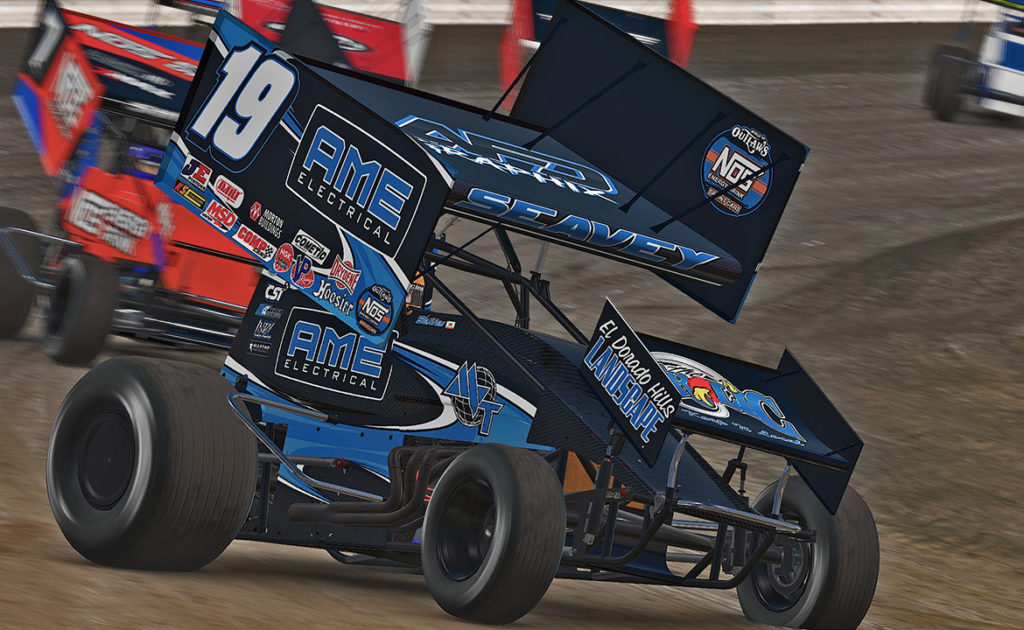 Logan Seavey is accustomed to dominating races. However, not normally while barefoot in a lawn chair.

With the racing world on hiatus, the 22-year-old dirt racer has traded the luxury of a full containment seat and fireproof racing attire for the comfortability of a duel cup holder cloth lawn chair and casual clothing that allows him to race barefoot against the best drivers in the world on iRacing at his residence in Indiana.

“I just have a steering wheel and pedal set up in my room and a monitor,” Seavey said. “Nothing crazy. No real big race simulator setup. I like to have use of a normal computer also, so it makes more sense for me to have it normally.”

While he wouldn’t say no to a more expensive sim rig at some point, Seavey is comfortable with the setup he has now. He was initially using a nine-year-old Logitech G27 steering wheel and pedal setup, but recently upgraded to the Fanatec CSL Elite wheel and pedals.

One setup that hasn’t change for Seavey is the Sprint Car setup he’s been using since 2017.

“I raced a lot a long time ago (on iRacing),” Seavey said. “Since 2017 I haven’t raced many races on iRacing. But when I got back on a couple of weeks ago for this World of Outlaws iRacing, I loaded the same exact set up I used in 2017. It was just fast. I didn’t really work on setups or anything like that. I was just able to get a few practice laps before the first race.”

Growing up in Sutter, CA, Seavey raced Outlaw Karts and got into sim racing through his friends he raced with in reality. He ran dirt races on rFactor and pavement races on iRacing – before dirt tracks were available. He was a regular in the sim racing world for about nine years before moving to Indiana to further his racing career.

Despite all of that success, Seavey said he feels like he’s been getting more recognition for his iRacing wins than he has for some of his actual wins.

“There’s been a couple races (on iRacing) that I’ve won that I get more social interaction and recognition than I’d get for winning a real race sometimes,” Seavey said. “I would say the sense of accomplishments isn’t as big. But the social interaction is definitely a lot bigger. But yeah, it’s definitely really, really big. I’ve won, or even just participated in a few big races in my career that were way bigger than anything I’ve done in iRacing, so far. This has been a lot bigger than anyone has expected it to be.”

“Hopefully this leads a few opportunities where I can spread my wings and do some fender racing,” Seavey said. “That would be a lot of run. It’s just cool to participate with the Outlaws. I think we all hope to get back racing and hopefully I get to run a few more Outlaw races this year. Obviously, not just in general, but in real life. Just winged racing in general for me is a struggle. But I feel like I get better every time I race. Hopefully there are more Outlaw races (for me) in the future.”

There may even be World of Outlaws Late Model races in his future. He was tapped by Mark Richards to run the virtual paint scheme of the famed Rocket1 Racing house car, which he won with last week. Through that relationship, Richards is willing to give Seavey a few laps in the real Rocket1 Racing #1 car — normally driven by two-time World of Outlaws Morton Buildings Late Model Series champion Brandon Sheppard.

“We told Seavey we’re probably going to let him come out and try one of Sheppard’s cars at one of our next testing sessions, just to let him get the feel of a real Late Model,” Richards said.

When it comes to success on iRacing, Seavey said it’s all about practice. Especially for real race car drivers. Racers are used to being able to feel how their car is reacting to the track conditions. There is no feel on iRacing — aside from force feedback in the steering wheel or if you have a full simulator that can provide it. There’re only visuals. You have to adapt to seeing how the car is handling and being able to make adjustments off of that, he said. To most, knowing how to do that well only comes from hours of practice.

“The people that have more time to practice tend to seem to be the ones that do better,” Seavey said. “Cause in real life you don’t get as much time to practice. It seems the more natural talented guys end up being faster. On the sim it seems like the guys with more time end up being better. Not always. There’s a lot of guys that don’t practice much and are really fast. And there are some people who aren’t that good in real life, but they sit at their computer for six or eight hours a day and they beat you.”

For now, until the racing season is back in swing, Seavey is comfortable sitting barefoot in his lawn chair, continuing to win. And win.

You can watch Seavey go for another World of Outlaws NOS Energy Drink Sprint Car iRacing Invitational win tonight on DIRTVision at 7 p.m. (ET). In the sixth round of the Invitational, drivers will race at the virtual Lernerville Speedway.