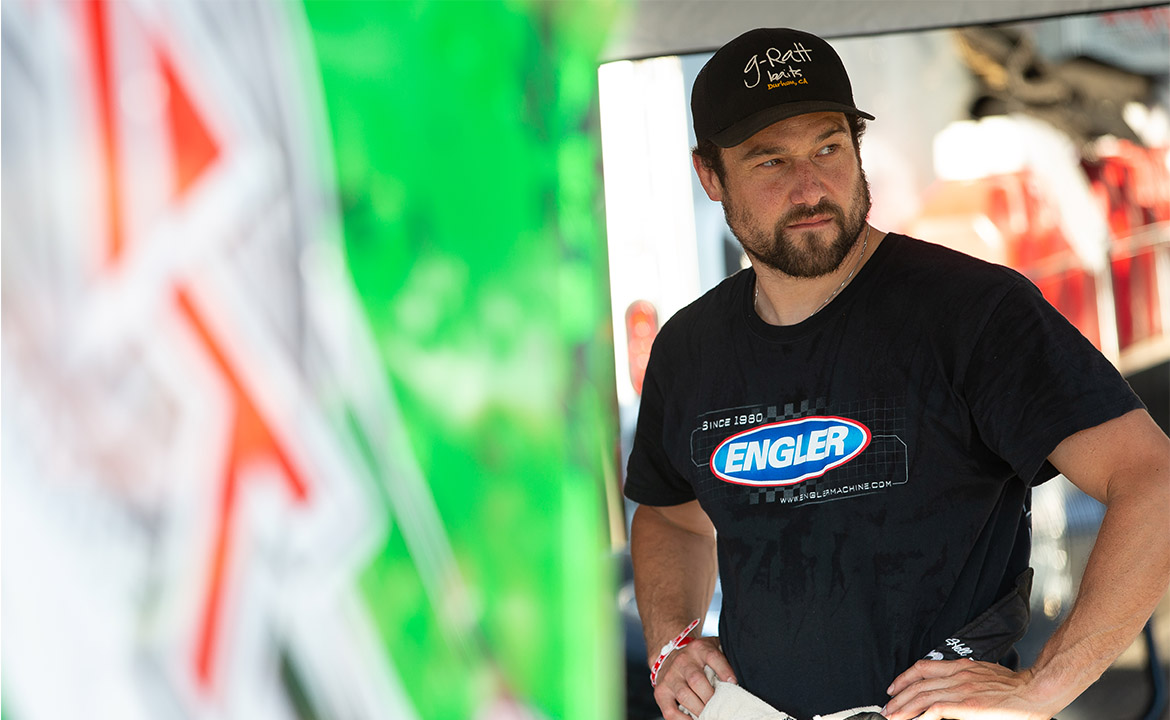 Kraig Kinser found himself in a position he hasn’t been for about 10 months at Cedar Lake Speedway on Independence Day – inside the top-three, competing for a win.

After battling with the likes of reigning champion Brad Sweet, David Gravel and Kerry Madsen throughout the entire 35-lap event, Kinser finished third – his first podium finish since Skagit Speedway in September and first podium at the 3/8-mile track.

The achievement is a small victory for the Kinser Racing team, who’ve struggled in the first half of the season – missing two Features and collecting one top-10 finish before the Cedar Lake event. Now, Kinser said he sees signs of the team heading in the right direction.

“We’ve been working on a lot,” said Kinser, a 17-time World of Outlaws winner and son of 20-time Series champion Steve Kinser. “We weren’t that great at the beginning of the year. Obviously, not where we wanted to be. We haven’t really been giving up, so we’ve been trying a lot of things. More so probably than what we would in a normal situation.

“Just trying to get back on the right track. We’re making sure everything is in the right places and everything is standard. Trying to get back to a baseline deal that we normally do. It worked out good this weekend. Last weekend (during the Jackson Nationals) I felt like we gained a little bit. I feel like we’re gaining a little bit now and this is where we want to be at. So, hopefully it continues.”

When diagnosing the car’s problem, Kinser said he and Crew Chief Mikey Kuemper looked at every aspect of the Mesilla Valley Transportation #11K. There was no detail of the car that went unexamined.

“As much as we were struggling, we were looking at everything,” Kinser said. “We were looking here and there. We were scratching our heads and taking a look at the setup we had and see what might be out of the ballpark and bring it back into a normal area. We took a look at everything to make sure everything we were doing made sense. Hopefully we keep it up.”

After the race, Kinser couldn’t put his finger on what exactly was the key fix to improving the car but did cite a gain in confidence as a huge contributor. After finding a bit of consistency during the Jackson Nationals by finishing inside the top-20 every race and then putting together a string of two consecutive top-15 finishes, Kinser and Kuemper began to build confidence in the decisions they were making.

To Kinser, that gain in confidence is one of the biggest adjustments a driver can make to help them run better.

“That’s just as big as the motor program or the shock program or wing package,” Kinser said . “It plays along with everything. You’ve got to have everything rolling in the right direction. You’ve got to be feeling good. Your car has to be rolling good. Your crew chief has to have confidence, too, and really feel good about the changes he does. We haven’t had that since the start of the year and hopefully we can continue that and keep getting good results.”

While he contended for the win at Cedar Lake, Kinser acknowledged there is still a lot of work to be done to be able to compete with the likes of Sweet, who currently leads the championship points with seven wins.

He and the rest of the World of Outlaws NOS Energy Drink Sprint Car Series team have a busy weekend ahead with three races at three different tracks in three days. First, they’ll head to 34 Raceway on Fri., July 10. Then, they’ll return to Wisconsin to race at Wilmot Raceway on Sat., July 11. And on Sunday, Kinser, of Bloomington, IN, will return to his home state to race with the Series at the Terre Haute Action Track in Terre Haute, IN.

“Hopefully it transitions and keeps going and keeps building,” Kinser said. “But this sport is pretty humbling. It can knock you back down as quickly as it gives you a good feeling. But that’s what we race for, these good runs and hopefully we can duplicate them.”

If you can’t make it to the track, you can watch all three nights of racing on DIRTVision.com.