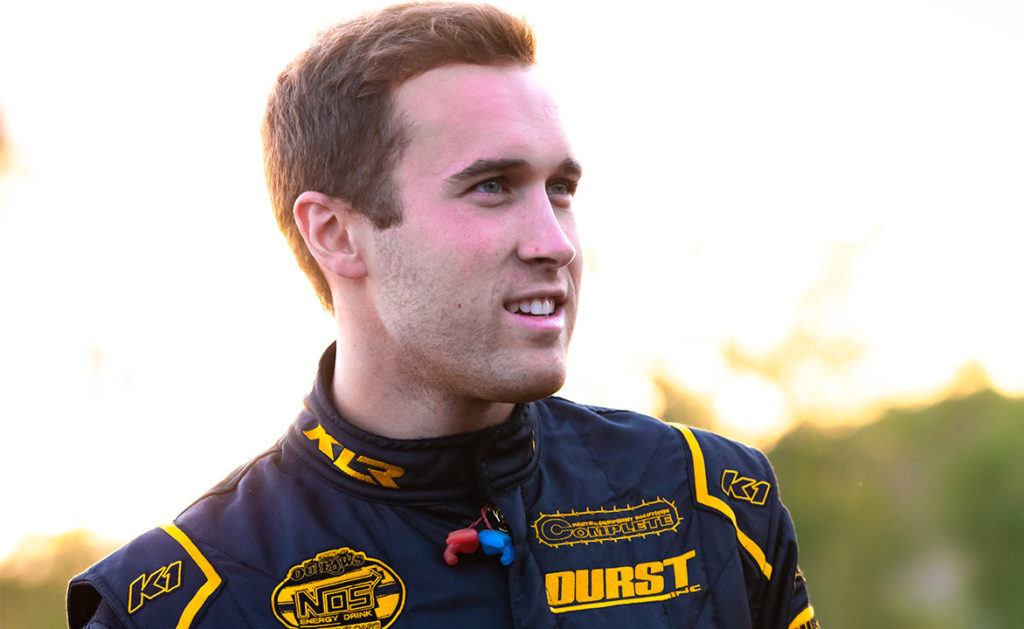 The first time Carson Macedo sat behind the wheel of the Jason Johnson Racing #41 car it was a match. They were ideal dancing partners. The chemistry resulted in a win during his debut race with the team at the 2018 360 Knoxville Nationals.

Three years later, he’s hoping that chemistry is still there when he rejoins JJR in 2021 for his third full-time season with the World of Outlaws NOS Energy Drink Sprint Car Series.

“I feel like there’s definitely the potential,” Macedo said. “The last couple of years I feel like I’ve learned a lot at [Kyle Larson Racing] and bettered myself as a driver. I think Phil (Dietz, crew chief and co-owner of JJR) has gotten to work with David (Gravel) for the past couple of years and I think David is extremely good. One of the best on the Outlaw tour. He brings awesome experience to the table, as well. I think him and Phil have made the 41 operation even better over the last couple of years. I feel like we’re both in a better spot than we were a few years ago when we worked together and I’m excited to get the opportunity to show what we can do together.”

The 2019 Kevin Gobrecht Rookie of the Year, from Lemoore, CA, spent his first two years on the tour driving for Kyle Larson Racing – which shut down at the end of the 2020 season. In that time, he won five races – he has six Series wins in total – and finished inside the top-five in points both years.

While his 2020 stats don’t trump his rookie year numbers – one win this season versus four last year – the COVID-19 pandemic forced the Series to run about 20 fewer events than in 2019 and never make it to the West Coast where Macedo thrives. Either a curse or blessing in disguise, the 2020 season took the Series mainly through the Midwest and Pennsylvania area where Macedo had struggled.

“I feel like if you look at the season as a whole, even though we didn’t win as many races, we were a lot more consistent and improved with our race car and with myself as a driver on tracks we struggled at before,” Macedo said. “That makes me excited to go into next year with more experience and more confidence.”

He’s also excited to reunite with Dietz. The two had good chemistry when they teamed up in 2018 and remained friends ever since.

“Personality-wise, I think he’s a great guy,” Dietz said about Macedo. “Very easy to get along with. I feel like his driving style is a lot like Jason’s (Johnson) style. It made it a lot easier to watch the car and tell what changes it needed in order to get a better balance and make it faster.”

Macedo mainly worked with Joe Gaerte as his crew chief for the last four years, first driving Gaerte’s own #3G car in 2017. The duo ran a handful of World of Outlaws events in 2017 and 2018. Then, when Macedo was tapped to drive for KLR in 2019, Larson kept the Macedo-Gaerte pairing together.

It’s hard for Macedo to compare Gaerte and Dietz, citing their both good mechanics. The biggest difference, he said, is Dietz, 36, is closer to Macedo’s age (24) than Gaerte, 54.

“Phil is a little bit of a younger guy and is probably a little more interested in all the things I do outside of the races, too,” Macedo said. “Phil and I, even though we haven’t been on the same team, have stayed really close. We’ve always been really good buddies since I drove the car in 2018. They’re both really good mechanics. I’ve been fortunate my whole career to work with really good mechanics.

“Only really had a few (crew chiefs) in my experience so far, you know. Paul Baines when I worked out in California and I worked with the Linder family for about a year. Then Joe and then Phil. That’s pretty much it. I think, although they’re both really good mechanics, it does get me really excited to be involved with a mechanic that is closer to my age range and I feel like our connection outside of the races is really strong, as well. I think that is really important to be able to build a successful team. You have to be able to have that good relationship whether you’re at the racetrack or not.”

JJR has become one of the top teams in the Series. It has two Knoxville Nationals victories – in 2016 with Jason Johnson and 2019 with David Gravel – and was in contention for the 2020 team championship before settling for a second-place finish in the points. Dietz said he believes the team has the potential to be a championship contender in 2021. Macedo has studied what it takes to make that happen in his two years on the tour.

“The hardest part about the World of Outlaws is putting the entire season together,” Macedo said. “I use my rookie year as an example. We had a pretty good Vegas and California – I grew up there. We won in California. Then went to Devil’s Bowl and went from Devil’s Bowl to Eldora. We were in the top-five both nights at Eldora. We were extremely competitive. We left there and I said to Trey, our car chief, I said “I think we can run top three in points in our first year,” I was that confident.

“Then we went to PA and Charlotte and after that were seventh in points. My confidence was super low. And we struggled for a few weeks after that. The biggest thing I learned is, in order to one day be a World of Outlaws champion, you have to be what Brad (Sweet, two-time and defending champion) and Donny (Schatz, 10-time Series champion) and Logan (Schuchart) and those guys are doing where they’re bad nights are seventh. It’s putting together a consistent season at 90 racetracks across the country. I don’t think people realize how hard that is to do.”

Macedo wouldn’t say just yet if he thinks he’ll be able to do that next year with JJR but is confident they have the ability to. Where he’s the weakest, JJR is strong. And where JJR has faults, Macedo shines. It’s a combination he’s excited to put on the track, starting Feb. 5-7 at Volusia Speedway Park for the 50th DIRTcar Nationals.

“I think they can bring a lot of strengths for me as a driver,” Macedo said. “And on the flip side of that, talking with Phil, he feels like California and places like that, places where I’ve excelled at and they maybe have not done quite as well, I can help out and bring some insight on my end. Obviously, Phil, and their program, is incredibly good and I’m sure that they’ll elevate me as a drive tremendously. I think there’s potential there to put together an entire season. I know for myself and Phil, all of the guys at JJR and everyone that’s a sponsor, will be working their hardest to make that happen.”

When he sits behind the wheel of the #41 car again, he’ll look for there still to be that perfect match.

For tickets to the 50th DIRTcar Nationals at Volusia Speedway Park, click here.