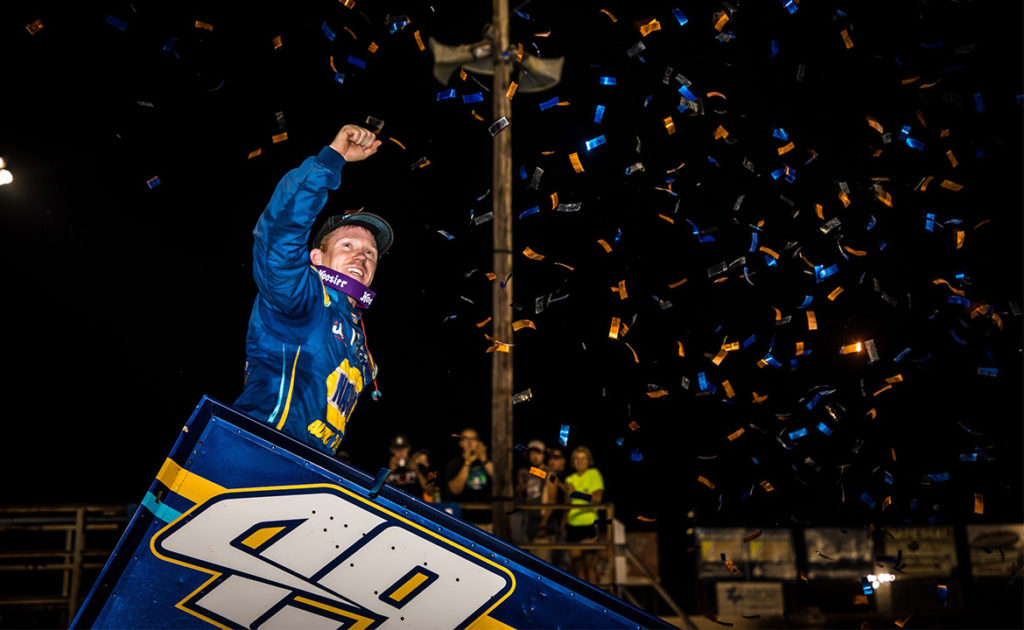 Leading all 35 laps of the Night Before the Ironman Feature at Federated Auto Parts Raceway at I-55 Friday night, Sweet rolled into Victory Lane at the Pevely, Mo. track for the first time in his career – his 12th win of the season.

“Pevely is a really awesome race track,” Sweet said. “I remember the first time I came here I was just in awe of the place. I’ve led a lot of laps here. I either stuff it in the fence or we got beat at the end. It’s nice to get the first one out of the way.”

While he led every lap en route to the victory, the Kasey Kahne Racing driver was not handed the victory with ease.

Missouri-native Hunter Schuerenburg started on the pole for the Feature, after winning his Drydene Heat race and the DIRTVision Fast Pass Dash and rocketed to the lead on the initial start. However, he hit the launch button too early. That forced the race to be restarted with Donny Schatz moved up to the front row and Schuerenburg moved behind him in the second row.

The front row was now Schatz and Sweet – the top two in the point standings. The two have been almost inseparable on the race track, having to race each other for position every week.

Schatz darted to the lead on the restart. Going into turn one, he chose low, while Sweet chose high. The Toco Warranty No. 15 car slid up the track exiting turn two, allowing the NAPA Auto Parts No. 49 of Sweet to charge off the high side and bolt underneath Schatz down the backstretch.

Sweet then launched his car into turn three, sliding past Schatz and up in front of him exiting turn four. Like Sweet’s corner before, Schatz had the momentum on the high side and snuck underneath Sweet for a drag race down the front straightaway. The lap went to Sweet, but only by inches.

The 10-time Series champion went side-by-side with Sweet into turn one and, again, was beat by the speed Sweet could maintain running the high line. Sweet’s lead went from inches to feet to yards over the reigning champion. Schuerenburg also pulled a slide job on Schatz to take second the next lap.

Five laps into the race, the first caution came out for Joe B. Miller coming to a stop on the track. On the restart, Schuerenburg went for the lead, attempting to pull off a slide job on Sweet into the first corner. However, his dive bomb was still not enough to clear Sweet before the No. 49 charged off the turn with a head of stream around the high side.

Before being able to get into a rhythm, the caution came out again. This time for Cale Thomas landing on his side in turn four.

When the green flag flew again, Sweet wasted no time stretching his lead over Schuerenburg. Schatz found his way around the No. 11 for second-place the next lap, too.

The top three remained in their running order for the remainder of the first half of the race. Behind them, though, Logan Schuchart and Sheldon Haudenschild were making their trek to the front. By the halfway point, Schuchart found his was to fourth – from fifth – and Haudenschild fifth – from eighth.

After a caution at the halfway point, both Schuchart and Haudenschild made their way by Schuerenburg to move up a position. Haudenschild didn’t just use his run to put Schuerenburg, behind him, though. He threw a daring slider at Schuchart into turn one and made it work. With 16 laps to go, he found himself in third and closing on second-place Schatz.

With 12 laps to go, Haudenschild threw a slide job at Schatz in turns three and four, and again made it work. Schatz couldn’t make the top work as well as Sweet and Haudenschild to challenge for the position back.

“Trying to hit a little one-inch spot with your right rear… is tough to do,” Schatz said. “Obviously, Brad and Sheldon are good at that kind of stuff. Me, I try to stay in a little bit more control.”

With Schatz behind him, the Wooster, Ohio-native was now in second-place and eager to hunt down his second win of the season.

Lap traffic plagued Sweet’s quest for victory. The slower cars forced him to move around and break out of his rhythm to find his way around them. That allowed Haudenschild to slowly work his way toward Sweet.

Haudenschild had Sweet in sight with five laps to. But Sweet was strong every time he ran the high side, able to carry enough momentum around the track to leave a few cars lengths distance between he and the NOS Energy Drink No. 17 car.

With three laps to go Haudenschild was building a run to catch Sweet. However, before he could fully execute on it, the caution came out for Carson Macedo flipping in turn two.

On the final restart, Sweet chose the middle of the track in the first corner, trying to block a big run by Haudenschild. It worked. The Stenhouse Jr.-Marshall driver looked underneath Sweet, but couldn’t put anything together to challenge him in the remaining laps.

“I thought with the restart we would have a little bit better of a shot,” Haudenschild said. “I knew I was running out of laps there. I didn’t really care either way with the caution or not. Brad was a little bit better than us. I feel like I got by Donny at the right time to make some ground up on Brad, but just finished second.”

Sweet sped off to his first Federated Auto Parts Raceway at I-55 win and 46th career win overall.

“The restarts were making me the most nervous,” Sweet said. “Didn’t know if I should be choosing the bottom or the top, you’re just real vulnerable into (turn) one there. Kind of found that line where I was driving across into one and felt a little better about the restarts. I could get to the cushion off (turn) two and as long as I could get a good run, I felt like I was pretty good on top of turns three and four.”

His win also helped his extend his points lead on Schatz – who finished third – after losing points to the Fargo, N.D.-native last weekend.

The focus for all of the drivers is now on Saturday night’s 55-lap $20,000-to-win Ironman event at the 1/3-mile track. A win at the Ironman 55 would be another ideal addition to Sweet’s dream year. Even with a dominating performance Friday night, he knows there could be room for improvement.

“We’ll go back and watch the video and make sure I was going everything right and hopefully come back and get us an Ironman tomorrow,” Sweet said.

The World of Outlaws NOS Energy Drink Sprint Car Series on Saturday, Aug. 3, will return to Federated Auto Parts Raceway at I-55 for the Ironman 55. Get tickets and more information.