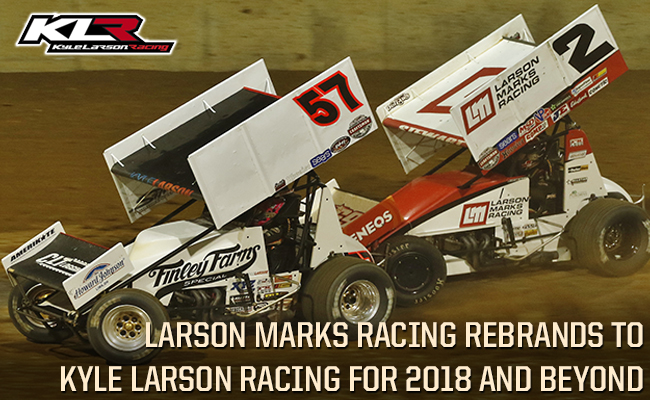 MOORESVILLE, NC — Dec. 8, 2017 — NASCAR star and dirt racing veteran Kyle Larson will shift into sole owner of Larson Marks Racing starting in 2018. The team will be run under the Kyle Larson Racing banner and Justin Marks will assume an advisory role with KLR moving forward.

“I couldn’t be more proud of what LMR has accomplished the past few years,” said Marks. “I was always hopeful that Kyle would learn about team ownership and operation to the point where he could be comfortable taking this project on himself. He’s ready for it and I’m looking forward to supporting him and KLR in the future.”

Kyle Larson Racing will continue with Shane Stewart of Bixby, OK., as the pilot of the No. 2. KLR will be led by crew chief Lee Stauffer, with the support of fellow Pennsylvanians Heath Moyle and Dennis Christ rounding out the team.

“I am excited to make this change and take over the reins of the sprint car team,” said Larson. “We have been very successful the past four seasons and it has been great working with Justin, Shane and all of the guys at LMR. It was always the plan for me to move to the forefront of our ownership group and the time is right to make this a natural step. Justin has taught me a lot about what it takes to be an owner. He has displayed great leadership and made this team to what it is today. I look forward to his continued involvement in our team.”

While the core of the Larson Marks Racing team will stay intact, Larson has also added Paul Silva of Sacramento, CA., to the KLR lineup as General Manager. Larson and Silva have previously worked together as driver and crew chief. Last year, they won eight of the 16 events they competed in together, including a runner-up finish at the 5-Hour ENERGY Knoxville Nationals.

Silva will also continue his crew chief role with Larson when the young NASCAR star is able to get back to his racing roots at the local dirt tracks.

“I have had long relationships with both Kyle and Shane, both with a lot of success in racing,” said Silva. “I hope to carry that over into my new role at Kyle Larson Racing. I’m really looking forward to getting to work with these guys and starting the season off on the right foot in Florida.”

Silva and Stewart also raced together on and off for years, including competing full time for three seasons. They won two American Sprint Car Series National Championships, several World of Outlaw wins, a podium finish at the 2011 410 Knoxville Nationals and an impressive five 360 Knoxville Nationals, four of them in a row from 2010 to 2013.

“Adding Paul to the group we already have established will only bring more success to our team,” said Stewart. “I think everyone having history together will make this transition extremely smooth. I am excited to see Kyle stepping up into this role. Justin has become a great friend and I am happy he will still be supporting the team.”

Since its inception, the former Larson Marks Racing team has amassed 35 wins, including the famed Kings Royal at Eldora Speedway in Rossburg, Ohio, the Front Row Challenge at Southern Iowa Speedway in Oskaloosa, Iowa, preliminary night victories at the Knoxville (Iowa) Nationals, two Capitani Classic wins at Knoxville Raceway and the Winter Heat Championship at Cocopah Speedway in Somerton, Ariz.

KLR will kick-off the 2018 season at Volusia Speedway Park in Barberville, Fla., during the DIRTcar Nationals in February. The team will be vying for the World of Outlaws Craftsman Sprint Car Series Championship. Sponsorship details will be released after the new year.