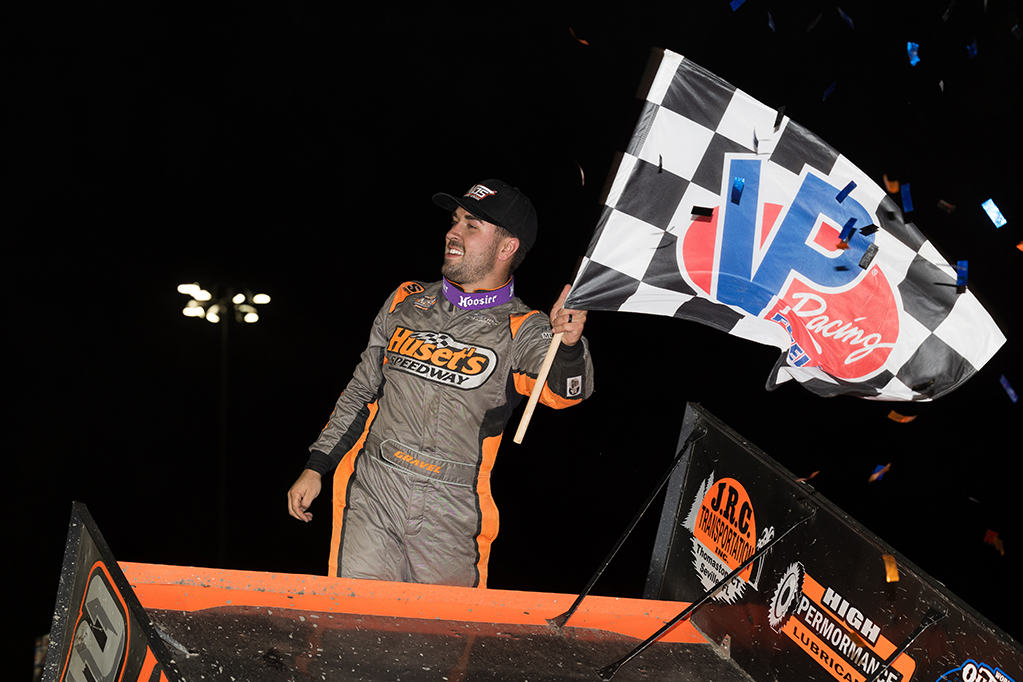 The right move at the right time won it for David Gravel on Saturday night.

It was Lap 29 of 35 at Granite City Speedway and Sheldon Haudenschild was poised to steal the lead and win away from Gravel; only until a lane change completely flipped the script.

His pace through lap traffic ultimately told Gravel something was off, and he jetted from the low line to the cushion at once down the backstretch. It couldn’t have came at a better time, as Haudenschild prepared to launch a slide job for the lead, but his momentum ran dry and the move fell short coming to the five-to-go signal.

Gravel’s perfect timing guided him to his fifth win of the World of Outlaws NOS Energy Drink Sprint Car Series season, and the 63rd of his career.

With a big month looming for him and his car owner Tod Quiring (Creator of THE SHOWDOWN at Huset’s & Jackson), they started off on the right foot with a home state win. The Big Game Motorsports shop is located in Windom, MN, just over two hours away from their victory in Sauk Rapids, MN.

“The car was really great,” Gravel exclaimed. “I could run both lanes, and that ended up being big. I could tell off the lappers I was slow through the corners. He [Haudenschild] started rolling and I moved up at the perfect time. Luckily, it wasn’t 40 laps or I might’ve been in trouble. To win on a slick track like that and pass Brad, Donny, that sure feels good.”

The 35-Lap Feature pres. by GMC Select Dealers of Minnesota began with Aaron Reutzel driving by Donny Schatz to lead the opening circuit at the 3/8-mile. Reutzel and Schatz ran 1-2 for the first 14 laps until the only caution of the race flew for a turn one pileup involving top-ten runners Carson Macedo, James McFadden, and Dominic Scelzi.

The first and only restart of the race ensued, and quickly proceeded to shuffle the order. A rough restart on the outside for Schatz sent his Tony Stewart/Curb-Agajanian Racing #15 falling to fourth as Gravel and seventh-starting Haudenschild roared to life.

Gravel proceeded to sneak under Reutzel’s Roth Motorsports #83 and take command, but it was short-lived as Haudenschild slapped the right rear of his NOS Energy Drink #17 off the fence and drove around them both to lead Lap 16 by a mere 0.011 seconds. Gravel took it back the next time by and held on until the checkered flag, but it wasn’t without a fight.

It came down to Gravel, the lone duck working in lap traffic, vs. Haudenschild and Schatz over the closing laps.

A perfect decision shattered all of Haudenschild’s momentum and ultimately sealed the deal on Gravel’s Minnesota victory for the Big Game Motorsports boys.

“I saw Sheldon earlier when we were side-by-side for several laps, and I assumed he heated his tires up and disappeared,” Gravel discussed. “Every time I hit the top I tried to look out the left side and make sure nobody was there. I was banging it off the cushion a couple of times. Definitely uncharacteristic for me, but Sheldon made me get up in the seat.”

Scoring his fourth second-place finish of the season at Granite City was Schatz in the Carquest, Ford Performance #15. After starting on the pole position and falling as far back as fourth, the 10-time Series champion rallied late in the running and stole the runner-up spot from Haudenschild at the checkered flag by 0.094-seconds.

“We just couldn’t get to the right place at the right time,” Schatz noted on their run. “Being outside on that restart killed what little run we had. Trying to get those spots back was tough. We salvaged a decent finish, though. We’re in the hunt and we’re getting closer. That makes me feel a lot better.”

“He just moved up at the perfect time,” Haudenschild said on Gravel’s win. “As soon as I was getting that run on him, he moved up with the lappers in front of him. I felt like I did a good job creeping around the bottom and moved up at the right time, but it just wasn’t meant to be. We’ll keep clicking off these podiums and the wins will come.”

Closing out the top-five at Granite City was early leader Aaron Reutzel in fourth and championship leader Brad Sweet in fifth aboard the Kasey Kahne Racing, NAPA Auto Parts #49.

Rounding out the top-ten on Saturday night was hard-charging Logan Schuchart from 18th-to-sixth, his Shark Racing teammate Jacob Allen in seventh, Pennsylvania’s Brent Marks in eighth, Parker Price-Miller in ninth with the Guy Forbrook #5, and Australia’s James McFadden in tenth.

UP NEXT: The Greatest Show on Dirt returns to The Sprint Car Capital of the World next weekend. On Friday and Saturday, June 11-12, the World of Outlaws NOS Energy Drink Sprint Car Series will make its first stop of the 2021 season at Iowa’s Knoxville Raceway. Fans can BUY TICKETS HERE or watch online at DIRTVision.