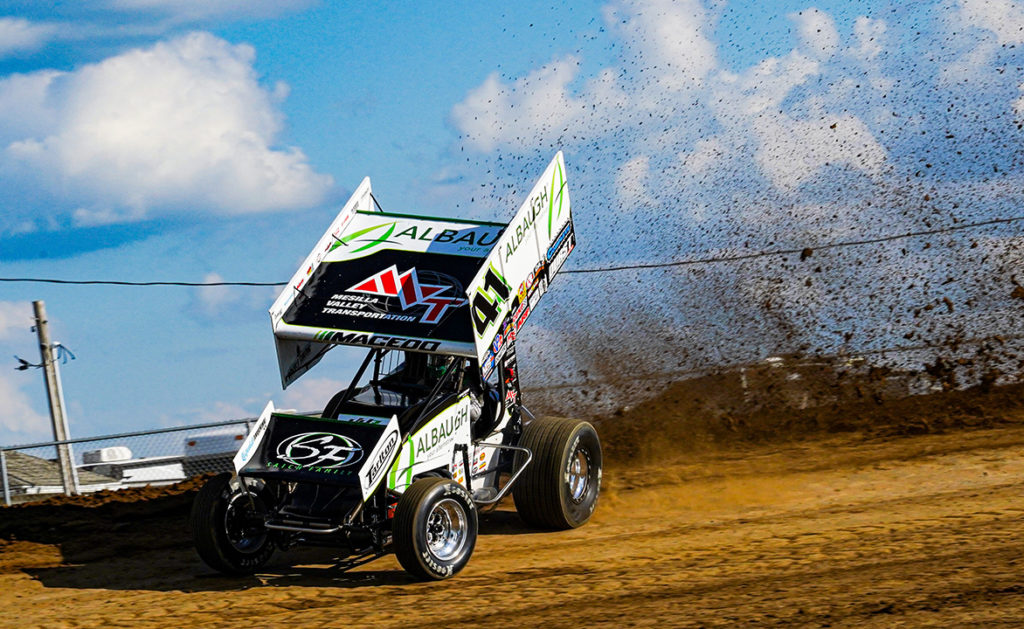 Since joining Jason Johnson Racing, Macedo tripled his win count and put them in contention for a championship

Between 2009 and 2020, Carson Macedo collected five wins in his first two full years on the World of Outlaws NOS Energy Drink Sprint car tour. In the following year and a half, he more than tripled that win count.

One obvious difference between the two periods was his move from Kyle Larson Racing to Jason Johnson Racing in 2021. But one of the biggest differences according to the 26-year-old is his change in mentality and maturity as a driver.

“I definitely think it has molded me into a different kind of race car driver,” Macedo said about his move from KLR to JJR. “When I went to KLR, my goal was to just win races. Just wanted to prove that I could be on the World of Outlaws tour and be on that level. I drove very aggressively. I did whatever it took to win. I never thought about finishing. That wasn’t my main priority. Don’t get me wrong, I still had to finish to win races, but I was willing to take risks at any time.

“Coming to JJR last year, I think Philip (Dietz, JJR co-owner and crew chief) has a really good package most nights anytime you go to a racetrack. At KLR we were a brand-new team with myself and (KLR crew chief) Joe Gaerte.”

With KLR still being a young team at the time, and essentially a new team when Macedo and Gaerte were paired together in 2019 – even though the two had already worked together – there wasn’t a notebook for the group to work off. That led to their car not always being where they needed it, putting Macedo in a position to drive aggressively to get a good finish and unable to fully focus on a championship.

At JJR, Dietz already had a solid notebook with years of trials and tribulations and success with Jason Johnson and David Gravel. Add the benefit of Macedo’s previous experience with the team – having ran six races for JJR in 2018 – and Dietz has been able to give Macedo a car he can win with about every night.

To make sure he was taking full advantage of that, the Lemoore, CA driver looked at how he could further improve himself.

“Last year, I wrecked a few times,” Macedo said. “I wrecked twice one night at Cotton Bowl. I wrecked at Eldora. I had several instances. Wrecked at [Silver Dollar Speedway] in the Dash. I realized at the end of the year when I did some math that if I just would finish those nights, I would’ve been right there with a very good chance at the championship. It made me revaluate, ‘OK, it is important to win races, don’t get me wrong, nobody on a race team wants to race for months on end with no wins. You got to win races. But at the same time, there are nights when your car is good enough to run fifth and making it try to be a winning car can sometimes cause you to wreck and that just doesn’t win championships.’

“So, it’s made me revaluate that when my car is good enough to be in the top five then some nights that is what I have to take is a fifth or a seventh. Just put together a consistent season… Philip is good at what he does and (crew members) Clyde (Knipp) and Nate (Repetz) and they’re going to make sure it is good at the end of the race. I think that’s changed me a lot and given us the mentality that we are capable of winning the championship and being at that elite level.”

Changing to that kind of mentality wasn’t easy, though. Especially in the moment, Macedo added.

“When you’re running fourth and you see an opportunity and that’s when the maturity comes into play I think,” Macedo said.

“Yeah, it’s a tough transition. I’m a firm believer that you can slow somebody down and make them more calculated, but it is hard to speed somebody up. I’m glad I started the way I did because it has enabled me to go to that next level when my car is good enough to win and I’m confident we’re in position to win, I can step up to the next level and drive at that speed. And that risk goes down a little bit because I know how to push it to that level. I think it is important at one point in your career to have that mindset and drive at that level.”

While tough, its benefits have shown with Macedo earning 18 wins, so far, with JJR, including the National Open at Williams Grove Speedway last year and currently sits third in points entering the Kings Royal week at Eldora Speedway, where Macedo won the Jokers Wild and Knight Before the Kings Royal last year.

His progress hasn’t been lost on Dietz either.

“I’ve seen him grow a lot,” Dietz said. “He’s come to understand the feel he really wants or really needs to be competitive. He understands the car that’s maybe a 10th-place car versus a first-place car or at least a contending car. He’s learned to take the good nights when he can and on the bad nights not push more than he can, try to finish the race and stay as consistent as possible.”

Change can be difficult, but for Macedo it’s led to the mentality he and JJR “can win on any given night.”

If you can’t make it to the track you can watch all the action live on DIRTVision – either online or by downloading the DIRTVision App.