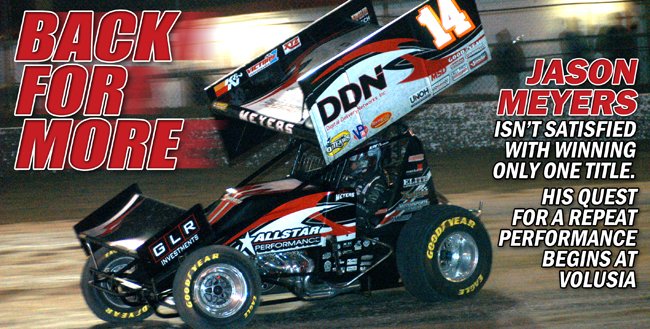 BARBERVILLE, FL – Feb. 10, 2011 – Jason Meyers completed a dream season in November by dominating the championship-deciding World Finals to become the first Californian to win a World of Outlaws crown. Now the hard work of defending that crown begins this weekend during the DIRTcar Nationals by University of Northwestern Ohio.

Now the hard work begins. Can Meyers win another title in 2011 like Donny Schatz did four times before him, or like Steve Kinser has done 20 times in his career? His quest starts Friday night with the season-opener during the 40th DIRTcar Nationals by University of Northwestern Ohio at Volusia Speedway Park.

“It was a really cool thing to win the World of Outlaws championship because it was a first for everyone,” said Meyers, who had been a three-time runner-up in the standings before winning the title last season.

Meyers admitted the two weeks leading up to the World Finals proved to be the most nerve racking. At the same time, the intensity involved in clinching the championship showed the character of his team and how it could handle the pressure of a tight points battle. The payoff was a coast-to-coast opportunity to celebrate.

“We had a party at the banquet in Charlotte with the 50 people who were there with us, then went out to California and had a get together with over 260 people who were involved with my racing career through the years, and then had an open house at our Brownsburg (Indiana) shop that had 250 people who most of which had been a part of making this happen in some way,” Meyers said. “We really took the time to celebrate and thank those who helped us turn this dream into reality.”

An opportunity to race in Australia in January helped Meyers recharge and set his focus on the task ahead as he prepares to battle in the most competitive series in motorsports, where the past two championships have come down to the final night in Charlotte. To stay ahead of the competition, he and his team came to Florida this week testing new ideas and cars leading up to Friday’s opener.

“There were some things we thought about doing last year, but because of the points race we had to hold off on them,” Meyers said Wednesday afternoon. “We have some new ideas coming from our engine and shock department as well as a new chassis so we’re looking forward to testing them out.”

Another long season is ahead, one in which Meyers will be the hunted instead of the hunter for the first time in his career. He believes he and his team can continue its momentum.

“Last year, we won a championship and became a good team so I’m telling them lets become a great team and win two,” he said.

For more World of Outlaws driver previews and information, visit the all new http://www.WorldofOutlaws.com .