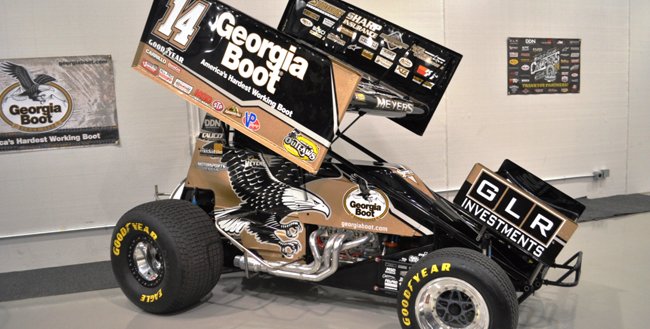 Threepeat? Meyers Gearing Up to Defend World of Outlaws Crown in ’12

INDIANAPOLIS – Dec. 8, 2011 – Jason Meyers clinched his second consecutive World of Outlaws Sprint Car Series championship barely a month ago, but he and his Elite Racing team already are focused on a threepeat in 2012.

Thursday night at the team’s headquarters in Brownsburg, Ind., Meyers reflected on his team’s accomplishments and looked ahead to next season, the 35 th in World of Outlaws history.

“It was really neat to win one World of Outlaws championship, but somebody told me a champion is measured by what they do the following year, not the year that they win the championship, so to come back and repeat really solidified Elite Racing as a championship team,” said Meyers, who also unveiled Georgia Boots as a new team sponsor for several events in 2012. “We’re really proud of what the team accomplished. Now we need to raise the bar and go for three.”

En route to winning his second title, Meyers rolled off a string of six consecutive victories that helped him dominate down the stretch. He’ll try to keep up that level of intensity by traveling to Australia in a couple of weeks for an off-season of racing action that’ll prep him for the season-opening UNOH DIRTcar Nationals Feb. 14-19 at Volusia Speedway Park near Daytona Beach.

“I always enjoy going to Australia for multiple reasons,” said Meyers, the only World of Outlaws champion from California in series history. “One, it keeps you fresh as a driver. Two, the fans are great down there, the sport has really grown in Australia. We have a great program put together with Sydney Speedway to run five races and go to the Classic, as well. We’re excited about going down there and working with Steve Caunt Racing, getting geared up for the start of our season in February. Florida is not far away. We really want to come out strong, that’s one thing we missed out on in 2011. We didn’t start strong and we’re looking to change that in 2012.”

Meyers earned nine victories in 2011 – tied with Steve Kinser and Craig Dollansky for the most in the series last season – but his first win didn’t come until July 8 at Cedar Lake Speedway. He’ll no doubt be aiming at a faster start this season, especially with a March schedule heavy with events in his native Golden State.

“I’d like to start where we ended, but unfortunately it’s not that simple,” Meyers said. “We just need to be ready and be focused. Last year we came out with some new ideas at the start of the year and we were trying some stuff and we struggled with it for a little while. We’ll tweak that game plan a little bit. You still have to get better, but I think we’ve come up with a way to be successful right out of the gate and maintain it throughout the year.”

The team’s hard work has led not only to consecutive World of Outlaws crowns, but the opportunity to attract new sponsorship. The team showed off a flashy new gold-and-black Georgia Boots-sponsored #14 KPC on Thursday night that will see the track for select races in 2012.

“Any time you see a new company come into the sport is really exciting,” Meyers said. “Georgia Boot is an incredible company and we’re very lucky to be able to work with them. They’re very excited about the grassroots approach that Sprint Car racing has. I think they’re going to be a great asset to Elite Racing and Sprint Car racing.”

For more on the World of Outlaws Sprint Car Series, click WorldofOutlaws.com.