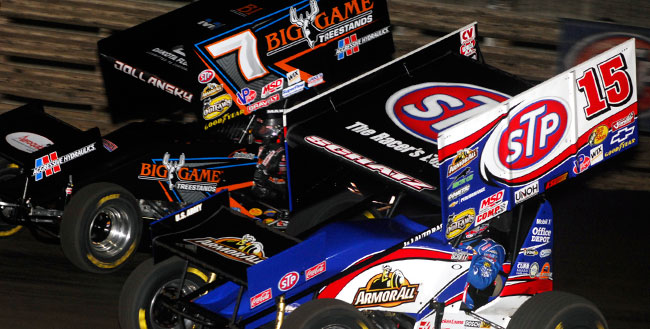 The March 29 race is part of a dozen events in Nevada, Arizona and California

CONCORD, N.C. — Jan. 18, 2013 — The spring Western swing has now become the Western dozen as the World of Outlaws STP Sprint Car Series has added Merced Speedway to the schedule.

The March 29 event marks the third consecutive year for the series at the tight third-mile oval, where Sammy Swindell has won each of the two previous World of Outlaws STP Sprint Car Series races.

“I don’t know that the facilities or the tracks really suit me any different, I think it was just my guys wanted to be better than everyone else and I wanted to be better than everyone else and we put in a good hard month of focus and got the job done,” he said. “Hopefully we’re in a position where we can do that again. Maybe we can ride on it a little longer and go back and use it to our advantage at the beginning of the year.”

This spring’s jaunt to the West includes 12 races at 10 tracks in Nevada, Arizona and California throughout March and the first two weeks of April.

It leads off with a two-day Las Vegas event at The Dirt Track at Las Vegas on Wednesday and Thursday, March 6-7. The series caps that weekend by making its return to Tucson International Raceway on Saturday, March 9, for the first time since 2007 at the Wildcat Shootout.

The World of Outlaws STP Sprint Car Series then finishes the trip with five consecutive weekends in California, beginning with a doubleheader at Thunderbowl Raceway in Tulare the following weekend, March 15-16.

The series will debut at the new Stockton 99 Dirt Track in Stockton on Friday, March 22, before the annual Mini Gold Cup at Silver Dollar Speedway in Chico on Saturday, March 23.

The Merced event is the only race currently scheduled the following weekend to close the month of March.

April begins on Friday, April 5, at Antioch Speedway in Antioch, where Californian Tim Kaeding threw a thrilling slide job on Schatz in turns three and four on the last lap to win last year’s lone event.

Tickets for the doubleheader at Thunderbowl Raceway can be ordered by clicking ThunderbowlRaceway.com.