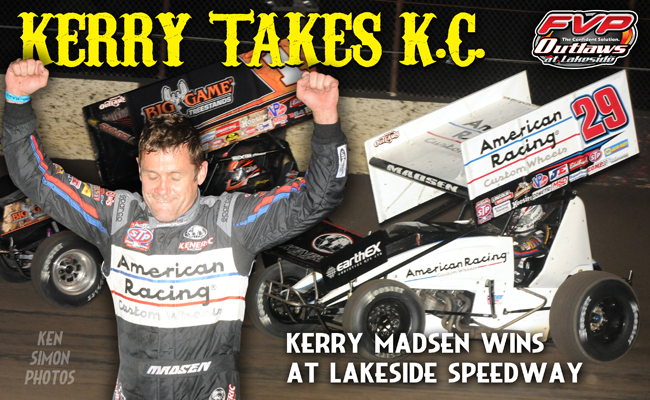 Madsen Charges to Victory In FVP Outlaws at Lakeside

KANSAS CITY, Kan. — June 7, 2014 — Patience paid off Saturday for Kerry Madsen as he battled Sammy Swindell and Paul McMahan for the win at the World of Outlaws STP Sprint Car Series FVP Outlaws at Lakeside Speedway.

“That was fun,” said Madsen, an Australia native who now calls Iowa home. “Sammy was quick and I just hung in there and stuck with that line and I thought, if I just stick with this line, the opportunity will present itself. And low and behold, it ended up being off of turn four… The car was just beautiful.”

Madsen and Swindell, who started side-by-side, battled through the early portion of the FVP Outlaws at Lakeside for the lead. Madsen, working the middle line he was so strong in all night, slid past Swindell on lap 15 to take the lead, then held off eventual runner-up McMahan to the checkered flag.

“I just drove it wide open,” Madsen said. “I tried not to make too many mistakes and then I couldn’t get the line in three and four at the end but I still had good speed. I thought I was alright. I enjoyed it. I’d like to thank the team for doing such an awesome job.”

“We felt like we let a few of these slip in the last month and a half so it’s good to get another one under the belt. I’ll tell you what, we really, really enjoy coming here and racing. The fans here in Kansas are just awesome and we just love all the support.”

This was the third win of the season for Madsen and his American Racing Custom Wheels team. Madsen is fifth in the race for the championship, 211 points back from leader Donny Schatz.

Rain fell on the track Friday night and early Saturday morning, contributing to fast conditions at Lakeside throughout the racing action Saturday evening.

The green flag fell on the 30 lap A-main with Swindell and Madsen leading the field into the first corner followed by Kerry’s brother Ian Madsen and McMahan.

A caution quickly fell on the track as Logan Schuchart tumbled through turns one and two after getting into the wall. Schuchart was OK. The field was reset to the original starting order.

As the green flag again flew, Swindell quickly jumped out to a big lead, with Madsen and McMahan chasing behind. As Madsen maintained his patience, making the middle line work for his car, he began to reel in Swindell.

By lap 15, Madsen had Swindell in his sights. Through turns three and four, with Swindell on the high side and Madsen in the middle, Madsen slid up off of turn four clearing Swindell and taking the lead.

As Swindell, a three-time Outlaws champion, developed engine issues, McMahan was able to get around him for second. McMahan then began his march to try to take the lead from Madsen. With just two laps left, McMahan had one final shot.

“We got to Kerry’s rear bumper and thought I might have had a shot for him,” McMahan said. “A lapped car had been running around the top and he saw Kerry go by so he thought he was getting out of the way and just got in my line but that’s part of racing.”

McMahan said he worked all night trying different lines in his CJB Motorsports car as the race progressed. He said that being in the third position gave him the chance he needed to make adjustments.

“Sammy was searching around once he got passed by Kerry and I was able to get by him,” McMahan said. “I just kept moving around until I found where my car was working best and we ran him down, we just came up a little short.”

Swindell said engine trouble midway through the race slowed his Big Game Treestands car. He said he tried different lines on the track, but it was not enough.

“That’s the reason they kind of caught us,” Swindell said. “It’s kind of a shame. We had a great car here tonight and didn’t win.”

“We’ll see what we can do with the next one. We’ll keep putting ourselves in a position here… We’ve got things going our way with cars and setups – we’ve just got to quit having problems.”

The World of Outlaws STP Sprint cars return to the track at Jackson Speedway in Jackson, Minn. on Friday, June 13 and then move to Knoxville Raceway in Knoxville, Iowa for the Mediacom Shootout on Saturday, June 14.

LAKESIDE SPEEDWAY NOTES: Kerry Madsen and his brother Ian both finished in the top-four in tonight’s race… Kerry Madsen and Cody Darrah have the most heat wins of the season, tied at 10 each… The Dash draw tonight was four. That is the eighth time this season four has been drawn and the second time in a row… Kerry Madsen lapped 12 cars in his campaign for the win tonight.