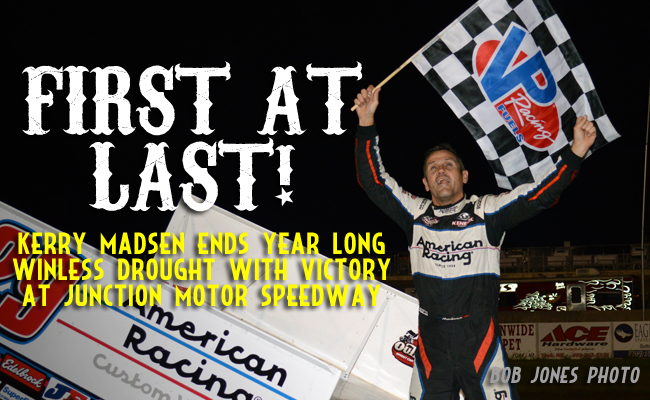 First at Last: Kerry Madsen Claims his First Win of the 2015 Season

MCCOOL JUNCTION, Neb. – Aug. 18, 2015 – After a season of podium finishes and consistent runs that had yet to result in a win, Kerry Madsen finally ended his year-long World of Outlaws Sprint Car Series winless drought with a victory at Junction Motor Speedway’s NAPA Auto Parts Sprint Car Extravaganza presented by Mid-Nebraska Land Development on Tuesday night.

Madsen led flag-to-flag at the track in McCool Junction, Neb. and became the 20th different driver to win an Outlaws feature this season.

“We got on a roll last year and somehow we got off it,” Madsen said. “And the last month we have been working so hard to try to get our racecars better and we had a great week last week and tonight. You can just never feel complacent when you’re on the front row with Donny. I was pushing hard, there probably wasn’t really another line, but you’re just expecting some big slide job. So every lap you drive as hard as you can. Just great to get the result.”

Madsen, who came in to 2015 after a season that saw him in victory lane six times, last won an Outlaws feature on Sept. 7, 2014 at Antioch (Calif.) Speedway.

Joey Saldana kicked off the night at Junction Motor Speedway by scoring his season-leading 13th quick time in qualifying and set a new track record of 13.528 seconds. Saldana’s fast lap beat the old 13.586 second record set by Daryn Pittman in 2013.

When the series hit the track for the 30-lap feature temperatures had fallen to an unusually cold 55 degrees and the challenge of the night was amped up with a sustained 10 mph wind.

Madsen and Donny Schatz took up positions on the front row. Madsen jumped out to an early lead with Schatz trying to chase down the No. 29 American Racing Custom Wheels car.

“I caught it really well and got (Donny) right where I wanted him in one and two, got the slider, we had that little bit of moisture in the bottom of three which made it easy,” Madsen said of his move for the lead.

He caught the back of the field by lap six and began working his way through.

The only caution of the night flew on lap 11 and proved pivotal for Saldana who spent the early half of the race in third. When the green flag once again fell, Saldana battled Schatz through turns one and two and dove low in three and four, trying a slider on Schatz’s No. 15 Bad Boy Buggies/Chevrolet Performance car for second. As the two cleared turn four, Saldana had taken over the position.

“We just tried something there through three and four and it worked,” Saldana said.

Madsen again caught the back of the field on lap 18 and Saldana tried to close the gap on him. Madsen however had built up a persistent one and a half second lead.

As the laps wound down, Schatz caught Saldana in traffic. On laps 27 and 28, Schatz tried to make the move around the No. 71m Motter Equipment car for second but, despite getting side-by-side, was not able to make it work.

“We were fast there at the end of the night and were able to get up to Joe,” said Schatz, who closed out the night with a third place finish. “It wasn’t our best performance in a long time but we’ll take it and lick our wounds and go on to the next one.”

Saldana, who finished the night in second, said his Motter Motorsports team is doing what they need to and the consistency is there, they just need to find that little something extra to put them over the top.

“I felt like we had a really good car, it just came up short,” Saldana said. “We’ll take it and move on to the next race. We’re a consistent car, we’ve just got to get a little bit better and a little out here is hard to do. We’ve just got to keep digging, doing what we’re doing.”

The World of Outlaws Sprint Car Series returns to action Friday at River Cities Speedway in Grand Forks, N.D. for the Second Leg of the Northern Tour. To find out more information and to learn how to buy tickets, visit http://woosprint.com/river-cities-speedway-august.