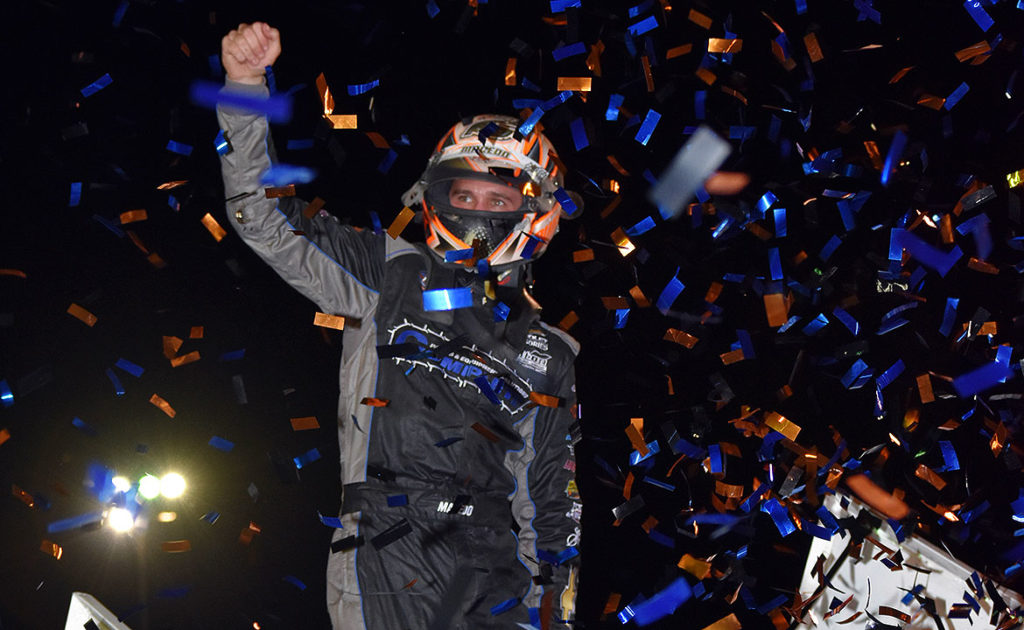 CHICO, CA — “Rookie” is a title Carson Macedo will hear before his name throughout the 2019 World of Outlaws NOS Energy Drink Sprint Car Series tour, but at Silver Dollar Speedway in Chico, Calif., it should be “veteran.”

Lemoore, Calif., native, Macedo, bested 34-time Series winner, and Grass Valley, Calif., native, Brad Sweet in a spectacular dual on Friday night at the quarter-mile speedway, to claim his second ever Series win and second at the track — his first win came in 2014.

His advantage; it’s a track he grew up racing on – local knowledge that paid off as he led an all-Outlaw podium sweep in the Mini Gold Cup presented by Riebes NAPA AUTO PARTS.

“I’ve raced here so much and just know the characteristics of it,” Macedo said. “It’s not a big part of winning these races, but it gives you that edge. It’s a home track for me.”

Sweet is no stranger to Silver Dollar Speedway, though. He, too, grew up racing at the track, and won a race there last year.

Having led more than half the race, Sweet looked to be en route to his second win at the speedway. Last week’s Feature winner at Thunderbowl Raceway, Ian Madsen – who ended up third – hunted Sweet for most of the race with enough speed to potentially make his own challenge for the lead. But then came Macedo.

From his seventh starting spot, Macedo raced much like his car owner Kyle Larson so often does — on the cushion lap after lap. Never considering another line. That confidence almost cost him, though. About half way through the race, he hit a rut on the high side of the track, throwing his car of balance and dropping from fourth to fifth.

That didn’t deter the young rookie’s victory lust. Continuing to stick to the high side of the track, he fought his way into the top three and then traded slide jobs with Madsen for second. In the lead Sweet had a different mentality then Macedo. He stuck to the bottom of the track — a move that ultimately proved to be his downfall.

On a restart with 15 laps to, Macedo got a strong enough run off turn four to slide under Sweet going into turn one and steal the lead. Madsen, on the bottom of the track, tried to best them both, edging Macedo for the lead out of turn two. He couldn’t compete with Macedo’s strength on the high side, though. Once Macedo cleared Madsen, the race was his.

“I had been getting some pretty good runs off of four on the top, with people in front of me, so I knew without anyone there I could get a run on him (Sweet) going down the front stretch,” Macedo said.

Sweet knows his rookie mistake was staying on the bottom of the track.

“Obviously, I made a mistake there, and stayed on the bottom probably one or two restarts too long,” Sweet said. “It was just really hard to get me to change my mind because I kept winning the restarts. But I really felt vulnerable on the restart, so it was no surprise when Carson got by me. You have to be perfect to win these races.”

Madsen went into the Series’ month-long California tour unsure how he’ll perform at the Golden State short tracks, claiming he’s not good at them. In two races, he’s secured two podium finishes — one being a victory.

“It’s (California) has been really good to us, so far,” Madsen said. “We’ve had an awesome race car ever since we got here. I just have to thank my crew for that.”

Macedo also credited his crew for his winning performance, including his crew chief Joe Gaerte, who he called “his hero.” Macedo drove for Gaerte in the All Star Circuit of Champions Series last year, finishing second in points.

With a win in the first six races of the more than 90 race World of Outlaws schedule, Macedo said it won’t change how he approaches the remainder of the season.

“I think I’m just going to race exactly the same,” he said. “Just drive every lap like it’s my last. Wherever the cards fall at the end of the year at the banquet, that’s what they’ll be.”

Pittman, who was coming off two second place finishes in a row, managed to salvage a ninth-place finish after starting 18th. He continues to lead the championship standings for California car owners Dennis and Teresa Roth over second place Donny Schatz, who finished fourth and cut his points deficit in half, now only 10 points behind Pittman.

The Series will make its next stop on the California tour Saturday, March 16, at the Stockton Dirt Track in Stockton, Calif., where Macedo hopes to utilize his veteran California track skills to once again be called, “winner.”

As always, you can catch all the World of Outlaws NOS Energy Drink Sprint Car Series action on DIRTVision.com.