Looking Forward to the 2016 Season 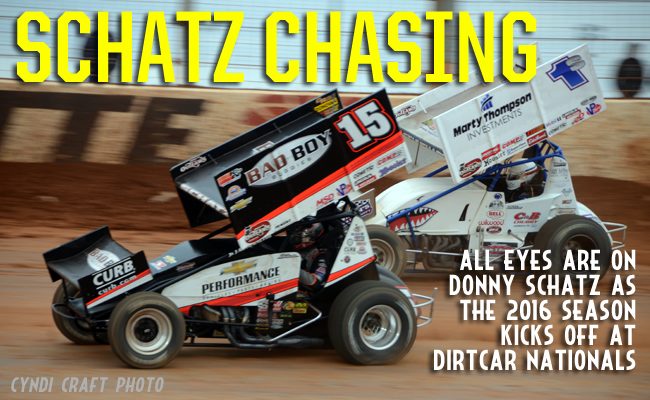 BARBERVILLE, Fla. – Feb. 8, 2016 – Donny Schatz drove to the infield of The Dirt Track at Charlotte Motor Speedway in November and claimed his seventh World of Outlaws Craftsman® Sprint Car Series championship. The win came at the end of a season that was one for the record books – Schatz recorded 31 wins, including his ninth Knoxville Nationals title and crossed over the 200 wins mark on the way to one of the widest championship win margins in 20 years.

Will a new wind blow in 2016? Or will the dominating performances that have come to define the greatest driver of his generation continue?

Under the sunny Florida skies at DIRTcar Nationals, the tone and tenor for the 2016 season will begin to form and familiar faces will look to unseat the No. 15.

If past performance is any indication, Shane Stewart will be one to watch. The Larson Marks Racing driver enters his second full-season back with the World of Outlaws with momentum in his favor. He and crew chief Scotty Martin picked up seven wins in 2015, including the Kings Royal and Ironman 55. Stewart closed out 2015 second in the championship standings.

With a close finish, Stewart comes into 2016 looking to be more than just Schatz’s foil – he wants to be the driver on top. Stewart and Schatz though are going to have to battle with another driver who has been there before and been successful.

Daryn Pittman, who inched past Schatz to claim the 2013 World of Outlaws Sprint Car Series championship, drives into 2016 looking to reclaim the magic. Pittman won five times in 2015 and finished fourth in the championship standings.

Brad Sweet, who finished 2015 third in the championship standings, his best ever points finish, returns to Kasey Kahne Racing for his third full season. He kicked off 2015 with a bang by winning the last night of DIRTcar Nationals. Sweet went on to win four more times including an emotional victory at Calistoga and one of the final events at Port Royal. Sweet looks to repeat his DIRTcar Nationals performance and improve upon his 2015 season.

Kerry Madsen returns in 2016 following a year that saw his best ever Knoxville Nationals performance and one series win. The No. 29 Keneric Racing team seeks to build on 2015 and find success in the season to come.

Series fixture Jason Sides makes his World of Outlaws return in 2016. Sides scored one win in 2015 and added to his 14 career series wins.

There are three drivers entering 2016 with new teams.

Joey Saldana joins Roth Motorsports for 2016. The veteran World of Outlaws Craftsman® Sprint Car Series driver scored three wins in 2015, including the final night of the season at the Bad Boy Buggies World of Outlaws World Finals. Roth rejoins the series for its first full campaign since 2014. With 94 career World of Outlaws wins and a sixth place position on the all-time wins list, Saldana is annually one of the most formidable drivers on the tour.

Paul McMahan starts 2016 with a move to Destiny Motorsports. The team, in its second full season with the series, welcomes on the veteran McMahan who has 26 career wins. He is the winner of the 2014 DIRTcar Nationals title.

David Gravel, the 2013 Kevin Gobrecht Rookie of the Year, moves to CJB Motorsports. The 23-year-old Connecticut-native, has seven-career series wins and is one of the rising stars in the World of Outlaws Sprint Car Series.

Two rising stars joining David Gravel in their return to the series in 2016 are Shark Racing teammates Jacob Allen and Logan Schuchart. Both drivers, in their third full seasons, are on the cusp of their first series wins with their family owned team.

In his sophomore season with the World of Outlaws, Jason Johnson, the 2015 Kevin Gobrecht Rookie of the Year, returns with intense focus and a strong drive to build on his first year.

Joining the Outlaws regulars in 2016 is Greg Wilson. Wilson, a two-time All Star Circuit of Champions championship winner, joins the series for his rookie campaign after winning his first ever Outlaws feature at Eldora Speedway’s 4 Crown Nationals in 2015. The Benton Ridge, Ohio-native looks to build on his success from the last year as he contends for the Kevin Gobrecht Rookie of the Year award.

As the World of Outlaws Craftsman® Sprint Car Series enters 2016, it continues a period of great parity. For the last four seasons there have been more than 20 different winners, including 23 last season, every season. From rookie drivers to series veteran, it is a challenge to win every night the Outlaws take to the track.

With the short off-season at an end, Schatz remains firmly in the sights of his fellow competitors. But with competition as fierce as it has ever been, the seven-time champion will not have an easy road ahead.

Tickets for DIRTcar Nationals start at just $20 and are on sale now by calling 844-DIRT-TIX (347-8849), or by visiting http://www.DIRTcarNationals.com. Infield parking will be available on a first come, first served basis to all fans with a pit pass. The cost of the infield parking pass is $10 and will be available at the pit gate off of turn four.