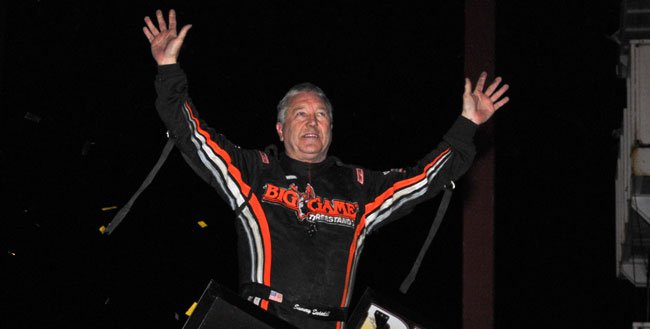 He maintains a slim championship lead over runner-up Joey Saldana

SEDALIA, Mo. — April 20, 2012 — Friday was a night of attrition as the cream rose to the top in the opening round of the Kasey Kahne Challenge.

Sammy Swindell and Joey Saldana, who entered the $10,000-to-win World of Outlaws event at Missouri State Fair Speedway within five points of each other for the championship lead, put on an electric show on a crisp night in front of a stellar crowd at the fairgrounds.

The duo nearly took each other out on a restart with three laps remaining as they made contact entering turn one on the half-mile oval. Instead, Swindell held on to the top spot after an aggressive move to get to the bottom of the track and he pulled away to pick up his first World of Outlaws win at Missouri State Fair Speedway since 1985.

“We’re not just driving around people so you’ve got to use every bit that you have and you’ve got to take advantage of it,” said Swindell, who also won with the Outlaws in Sedalia in 1982.

“The main thing is to put yourself in the right position. When we’re in front we had control of the first corner. Once it was like that and you get out there running, the guy has to run behind you in the dirty air and if theirs were like mine, it wasn’t much fun.”

It was a bittersweet night for Saldana, who is only eight points behind Swindell after a runner-up finish.

“When you’re racing guys like Sammy Swindell, Steve Kinser, Donny Schatz, they’re champions (and) have won a lot of races,” Saldana said. “You’ve got to learn from your mistakes and hope that you don’t do it again. We were in position. I just had to put my car in a better spot and I think we could have won the race.”

The drivers battled throughout several aggressive restarts, including one on lap 15 when the duo made it three wide with leader Cody Darrah getting stuck in the middle. Swindell capitalized on momentum in the outside lane to rocket into the lead off turn two as Saldana catapulted off the bottom lane to move into a close second.

Missouri native Brian Brown maneuvered from sixth to third on the same restart as the trio pulled to a sizeable advantage. Darrah, who was running fourth, brought out a caution with three laps remaining when he stopped in turn four with a broken U-joint.

Swindell chose the outside lane on the double-file restart and Saldana entered turn one side by side for the lead. They exited turn two in a tight battle before the final caution waved as NASCAR star Tony Stewart sustained a flat right rear tire while running fifth.

Swindell again picked the outside lane, which set up a drag race to turn one. In what looked like a dead heat, Swindell edged Saldana to the inside groove in turn one as their cars touched. Saldana lost momentum as Swindell cleared him for the lead.

“I was just trying to race my car really clean. You get to a point like that and you kind of have to throw that out of the window if you’re going to win an Outlaws show. Tonight I think I just drove my car a little too easy.”

Brown closed within two car lengths of Saldana before his car began to show signs of running out of fuel, forcing Brown to race conservatively the last two laps.

“When you run a top three anywhere, it’s good, especially with the Outlaws,” he said. “With two to go, I was running out of fuel or I thought we may have had something for them. Hats off to Sammy and Joey. They’re at the top of their game right now and to run third to those guys is an honor.”

Donny Schatz earned the KSE Hard Charger Award after driving from 19th to fourth, which kept him third in the championship standings – only 20 points behind Swindell. Jason Sides, who started 14th, rounded out the top five.

Kerry Madsen drove from 12th to sixth with Kraig Kinser finishing seventh. Brady Bacon was eighth and Craig Dollansky placed ninth after violently flipping on the first lap of the dash. David Gravel charged from 17th to round out the top 10.

Stewart, outside polesitter and Missouri native Danny Lasoski, and Swindell each claimed a heat race. Brown won the Last Chance Showdown and Dollansky was the fast qualifier with a time of 15.975 seconds.

Round 2 of the Kasey Kahne Challenge is Sunday, May 20, at Hagerstown Speedway in Hagerstown, Md.

(11:08 p.m.) Caution on the restart for Tony Stewart, who stopped in turn two with a flat right rear tire.

(10:59 p.m.) Chad Kemenah was charging for the lead and dove underneath leader Cody Darrah entering turn three on lap 15 when Kemenah hit an infield tire and stopped in turn two.

(10:53 p.m.) Austen Wheatley stopped in turn four on lap seven to bring out another caution. Cody Darrah is the leader with Sammy Swindell, Tony Stewart, Joey Saldana and Danny Lasoski rounding out the top five, respectively.

(10:41 p.m.) Brad Sweet spun after what looked like contact with another car entering turn one on the opening lap. Sweet’s car then flipped a couple of times. He is ok and they are taking the car to the work area.

(10:39 p.m.) Stevie Smith has pulled into the pits and it looks like his night is finished.

(9:45 p.m.) In his first appearance at the track, Cody Darrah outlasted Danny Lasoski to win the dash and earn the pole for the 25-lap feature. Here are the dash results:

(9:32 p.m.) Kraig Kinser, Craig Dollansky and Stevie Smith crashed on the frontstretch of the opening lap of the dash. Kinser tipped on his side and Dollansky flipped. All drivers are ok.

Kinser is headed to the work area. Dollansky and Smith are done for the dash and will line up ninth and 10th, respectively, in the feature.

(9:25 p.m.) The eight was drawn for the dash inversion so fast qualifier Craig Dollansky will start on the outside of the fourth row. Here is the lineup:

(9:22 p.m.) Steve Kinser and Brian Brown are slated to start on the front row of the Last Chance Showdown, which has been changed to 10 laps. Here is the lineup:

Jason Johnson pulled into the pits early in the race.

Cap Henry is in the pits.

The top two go to the dash and top six to the feature.

(7:22 p.m.) Tony Stewart arrived by helicopter just in time for his hot-lap session, which was the first.

(7:05 p.m.) They are just putting a light coating of water on the track before the sprint car hot laps.

(6:48 p.m.) The sprint car drivers are now starting to put heat in their engines.

(6:27 p.m.) The meeting just wrapped up. The drivers are set to put heat in their engines in 10 minutes and hot lap after the late models, which are supposed to hot lap at 6:45 p.m.

(6:19 p.m.) The drivers meeting started a couple of minutes and the sun is making an appearance.

(5:45 p.m.) The drivers meeting is in a half hour. There are 27 cars here, so each will get two laps in qualifying. There will be three, eight-lap heat races that transfer the top six to the 25-lap feature. The heats are inverted by four, meaning the fast qualifier starts fourth in the first heat, the second quickest starts fourth in the second heat, etc.

The top two in each heat plus the next four fastest in qualifying who advanced to the feature through their heat race make it to a six-lap dash, which will be inverted by either four, six or eight based on a random draw.

The drivers who didn’t advance to the feature will compete in a 12-lap Last Chance Showdown, which transfers the top six to the feature. The top four get their qualifying time back.

(3:16 p.m.) There are 20 sprint cars in the pits as of right now, including Tony Stewart and Brad Sweet.

(2:08 p.m.) It’s been quite a temperature drop here in Sedalia, Mo., for the first event of the Kasey Kahne Challenge. It’s in the low 50s with a strong breeze, but we are racing at Missouri State Fair Speedway tonight.

There are about a dozen sprint cars in the pits right now with a few others lined up to get in. I’d estimate that we’ll be around 30 in a car count, but that’s a complete guess.

The front gate opens at 4 p.m. with hot laps scheduled for 7 p.m.