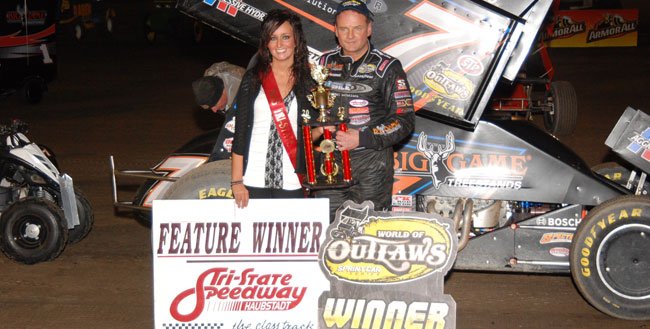 That didn’t stop the World of Outlaws drivers from taking part in a feast-or-famine feature on Saturday at Tri-State Speedway – arguably the smallest track the series has competed on this season.

Craig Dollansky survived a couple of run-ins and a heavy dose of thick lapped traffic to pick up his second Outlaws victory of the season and the $10,000 prize. It also extended his streak of claiming each World of Outlaws feature at the high-banked, quarter-mile oval during even years since 2006.

“I don’t know what there is to that,” he said. “It takes a team to win races and a great team, especially on this tour. It’s not easily done.

“At Haubstadt, there’s definitely a lot going on at this race track. There was a lot of back and forth, and sliding back and forth. It was great racing and that’s what you see here.”

After winning the dash, Dollansky started the 40-lap feature on the pole. Once the green flag waved, it was a no-holds-barred match between the 24 drivers in the bullring setting.

Several drivers were three wide and a couple popped wheelies on the opening lap as Dollansky took charge of the top spot. He chose the bottom line on a trio of double-file restarts in the first five laps before lapped traffic began to play a role.

With fifth-place starting Joey Saldana a close second, Dollansky entered lapped traffic on lap 11. Saldana closed within inches on several occasions as both drivers tried to maneuver around the slower cars. However, Saldana’s night ended on lap 16 when contact with Dollansky sent him airborne.

As the duo exited turn four a handful of laps prior to the midpoint of the feature, Dollansky worked toward the bottom of the track to avoid a slower driver. Saldana shot for a similar opening, but his car made contact with the left rear tire of Dollansky. The impact launched Saldana, whose car flipped several times across the finish line to bring out the red flag.

“I was working on some lapped cars and we got to the 66 car (of Alex Shanks),” Dollansky said. “I got to him a couple of times, but couldn’t get him cleared and he got us a little bit sideways on the frontstretch. As I was trying to get corrected and get going down the frontstretch, Joey was on my left rear there. I hate it for him. I hated to see him break an axel and get tipped over there. You never want to see that kind of stuff.”

After hopping out of his mangled car, Saldana found Dollansky parked in turn three during the stoppage. Saldana marched across the infield toward Dollansky to the roar of the crowd and the duo exchanged words before Saldana walked to his pit as the cars refired.

Brady Bacon dove to the bottom on the restart to capture the lead, which he relinquished a couple laps later after a broken fuel valve forced him to the infield with a 21st-place finish.

Dollansky regained the top spot and he manipulated traffic for the final 22 laps en route to the victory.

Dale Blaney capitalized on the final restart two laps before the midpoint by charging from seventh to third. After Bacon fell out of the race, Blaney advanced to the runner-up position to earn a season-best finish with the World of Outlaws.

“If you were a little bit better than a guy you could slide across and make a guy lift pretty easily,” he said. “If your car was really good you could maneuver a little bit.”

Championship leader Sammy Swindell, who entered the race with an eight-point advantage over Saldana, salvaged a third-place finish after fighting a broken right front shock for most of the race.

“I had a great car,” said Swindell, who now leads Donny Schatz by 36 points in the standings. “We just had a problem where we did a wheelie and broke a shock. I got the front up and I let it drop down too hard. We salvaged it with a third-place finish.”

Swindell, who has five World of Outlaws feature wins at Tri-State Speedway – including last season – timed in quickest with a top lap of 11.766 seconds.

(10:14 p.m.) Brady Bacon is the new leader after diving under Craig Dollansky on the restart. Brian Paulus brought out a caution on lap 19 with a broken front end.

(10:09 p.m.) What a battle! Craig Dollansky, Joey Saldana and Stevie Smith were putting on an intense show for the top spot when Dollansky and Saldana collided exiting turn four on lap 16. Saldana hit Dollansky’s left rear tire and flipped across the finish line.

(9:59 p.m.) Donny Schatz hit an infield tire and apparently broke a front end, Randy Hannagan sustained a flat tire and Kerry Madsen had front end damage to bring out a caution on lap five. Schatz and Hannagan were able to return.

(9:25 p.m.) They are reworking the track a bit before the sprint car feature.

(8:55 p.m.) Geoff Dodge led all 12 laps to win the Last Chance Showdown and advance to the feature. Here are the results:

(8:51 p.m.) Austen Wheatley, who was running in the sixth-and-final transfer spot, slowed on the frontstretch to bring out a caution with two laps remaining in the Last Chance Showdown. Geoff Dodge leads with Brad Greer, Chad Kemenah, Alex Shanks and Paul McMahan the top five.

(8:44 p.m.) Craig Dollansky held off Stevie Smith to claim the dash and earn the pole for tonight’s 40-lap feature. Here are the dash results:

(8:23 p.m.) The dash inversion is a four, meaning fast qualifier Sammy Swindell starts on the outside of the second row. Here is the dash lineup:

(8:05 p.m.) Here is the lineup for the Last Chance Showdown, which transfers six to the feature:

(7:50 p.m.) Dale Blaney pulled away to a decisive victory in the second heat race and Donny Schatz finished second to also earn a bid into the dash. Here are the results:

(7:45 p.m.) Geoff Dodge stopped on the frontstretch on lap three of the second heat race to bring out a caution. Dale Blaney leads with Brady Bacon, Kerry Madsen, Donny Schatz and Paul May the top five.

(7:39 p.m.) David Gravel led all 10 laps to win the first heat race and Craig Dollansky held off Steve Kinser for the runner-up position. Here are the results:

(7:31 p.m.) Cars are rolling onto the track for the first heat. I just pulled to the infield and this crowd is packed. What a great turnout.

(7:28 p.m.) The National Anthem just played and cars in the first heat are making their way to staging.

(7:09 p.m.) They are doing some track work as Opening Ceremonies nears. Sprint heats are first up.

(5:59 p.m.) The pits are roaring as the drivers are heating their engines prior to hot laps.

(5:29 p.m.) The drivers meeting wrapped up and the drivers are getting ready to put heat in their engines.

(5:11 p.m.) Here is the qualifying lineup, which will also serve as a roster:

(5:05 p.m.) We have 31 sprint cars here. Each will get two qualifying laps, which will determine the lineups for three, 10-lap heat races. The heats will be inverted by four, meaning the top qualifier starts fourth in the first heat, the second quickest starts fourth in the second heat, etc. The top two in each heat will advance to the dash — along with the next four in qualifying who advance through the heat — and the top six in each heat qualify for the 40-lap feature.

There will be a 12-lap Last Chance Showdown, which transfers the top six to the feature. The top four get their qualifying time back.

(2:17 p.m.) It’s another cool day in the Midwest, but it looks like we’ll be getting in our first race on a Saturday since March 10. The temperature is in the low 50s with an overcast sky and a solid breeze.

The drivers are about to be let in the pits and most made the six-hour drive from Sedalia, Mo., last night and this morning. A bunch of drivers are working on their cars in front of the pit gate. I’d guess we’ll be at a similar car count as last night, when we had 27 drivers.