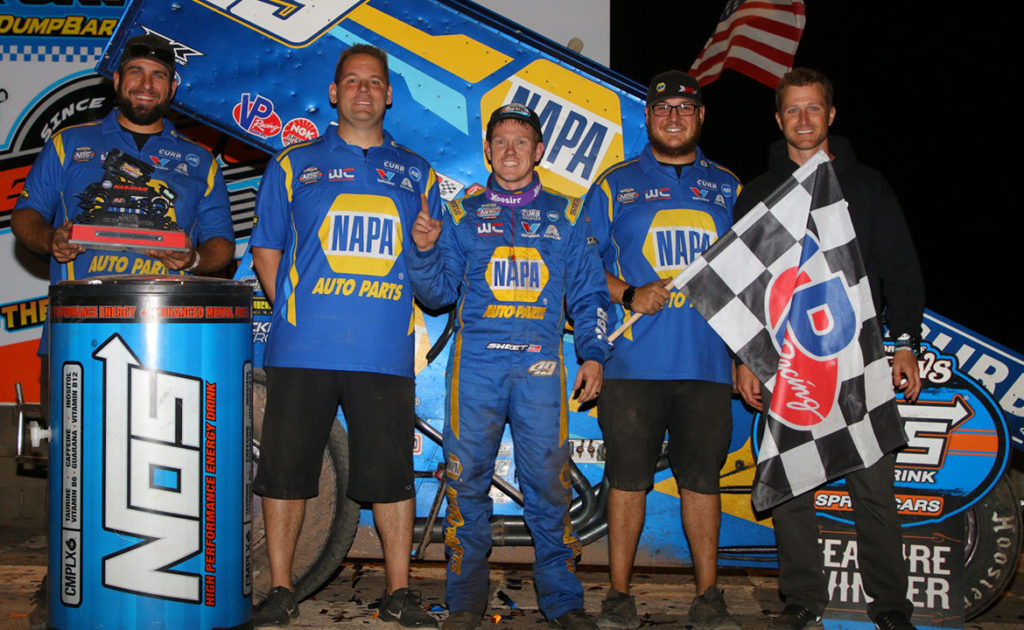 In the words of Brad Sweet, “the more you lead, the better you get at it.” The statement rings like a prophecy he wrote from himself.

Almost halfway through the World of Outlaws NOS Energy Drink Sprint Car Series 2019 season, Sweet has made leading a habit and gotten better at it each race.

With more than 100 laps led already this season, the Grass Valley, Calif.-native added another 38 laps to that total after claiming his fifth win of the season Saturday night at Beaver Dam Raceway – and his second win in-a-row.

“I’m just happy we’re clicking them off and have a little bit of momentum on our side,” said Sweet, after claiming his 39th career Series victory.

His second victory at the Wisconsin track wasn’t earned without a few faults and lessons learned along the way.

The 1/3-mile track was slick and technical for the 40-lap Feature, he said. That meant finding the right line at the right time; a feat the Kasey Kahne Racing driver faults himself for not executing perfectly.

But before the track began to take rubber late in the race, forcing Sweet to contemplate the best line, he had to contest with DIRTVision Fast Pass Dash winner Shane Stewart for the lead.

On the initial start, Stewart jumped to the lead riding the high side of the track. Sweet chose the bottom. In two laps, the advantage proved to be Sweet’s. The NAPA Auto Parts No. 49 sped by Stewart, putting close to a second gap between them.

His newfound lead was cut short a few seconds later when Logan Schuchart brought out the first caution of the night by coming to a stop in turn three.

On the restart, Sweet returned to form. He shot to the lead, leaving the remaining 23 cars to content for second amongst themselves. Stewart held on to the position for the next few laps before trying the low line and bicycling his car off turn four, giving Daryn Pittman an easy pass for second-place.

For the remaining 33 laps, third-place was traded between Stewart, David Gravel, Sheldon Haudenschild, Donny Schatz and Ian Madsen. Each driver throwing a slide job on the next to try and claim the position.

By the halfway point, Sweet caught lap traffic and Pittman started to close in. However, navigating lap traffic – a situation Sweet has found himself in several times already this year while leading – only made him faster.

Pittman eventually transitioned to the high side and again began to close in on Sweet. But with 15 laps to go, Sweet also moved to the top and pulled away to the $20,000 victory.“It was finesse. It was tricky,” Sweet said about the race. “I had to move around on the race track. I think the bottom caught a few guys off guard. I don’t know if they thought they should be on the bottom in (turns) three and four. I kind of had an idea. I did my warm up down there to see how much grip was down there.

“Luckily it was good down there early and I was able to get the lead. I made a couple of mistakes there. I probably stayed down there too long. But I didn’t want to follow lap guys. It’s just tricky sometimes leading and moving around.”

While Pittman’s second-place finish – his third podium finish in-a-row – was a momentum building performance with his Roth Motorsports team, he’s hungry for more.

“It just feels like it’s been a while since I won,” said Pittman, who last won in Florida in February. “I’ve gone from, how do we turn things around, to being consistent, to now dammit I want to win. We’ve still got to get a little bit better, but we’re close.”

The duel for third was won by the Jason Johnson Racing No. 41 car of Gravel. In JJR’s return to Beaver Dam Raceway after Jason Johnson’s fatal accident at the raceway last year, Gravel kept the No. 41 car up front all night. He was fastest in practice, went Quick Time in Qualifying, won his Drydene Heat race and fought hard for a podium.

“We wanted to win tonight, but we’re happy with a podium,” Gravel said. “Third is good. We’ve been rolling pretty good here. Just have to keep it going.”

Gravel’s podium finish leaves him fourth in points – 144 points behind leader Sweet. Pittman is third – 138 points back – and Schatz is second – now 54 points behind Sweet after finishing seventh.

Along with the points lead, Sweet now leads World of Outlaws drivers in the most laps led, the most podium finishes – with 12 – and most wins, so far, this year. To Sweet, though…

“It really doesn’t mean a whole lot,” Sweet said. “It’s not a bad thing ever to, toward the end of June, have the most wins. But I’ve been there before. I’ll keep saying it over and over and over, these next few months, July, August and in even September, those are the months that are going to make or break the season. You can run good all the way to July 1 and never win another race.”

The more he leads, the better he gets.

The World of Outlaws NOS Energy Drink Sprint Car Series on Sunday, June 23, will venture, for the first time, to Dubuque Speedway in Dubuque, Iowa.