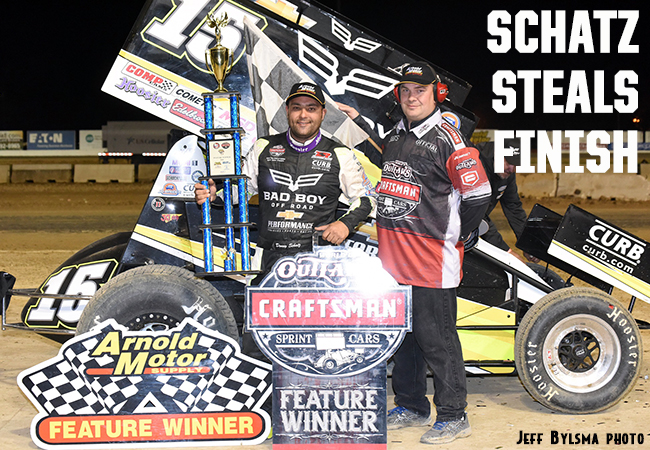 SPENCER, Iowa — Sept. 16, 2016 — Donny Schatz only led two laps on Friday night in the Arnold Motor Supply Shootout at Clay County Fair Speedway, but they were the most important two — the final two — as he picked up his fifth-career win at the track. Schatz used a strong restart on a green-white-checker finish to snatch the win from Daryn Pittman, who paced the opening 28 laps.

Pittman started on the pole and was the dominant car for the majority of the 30-lap race, opening big leads in lapped traffic on several occasions. On the green-white checker restart, Schatz dove low in turns one and two and cleared Pittman to take the lead. Pittman looked to the high side of turn four and then low in turns one and two on the white flag lap, to no avail as he tried to get back by Schatz.

“There was no game plan on the restart,” said Schatz. “The 9-car was a lot better than we were. He had a lot different line. He was going out in one and coming back across. I got the wing back on that last restart and figured if I could get the bottom, maybe he’d slip up and I could get there before he got back down. Then it was just do whatever you can to carry as much speed as you could. Without the restart, I definitely wouldn’t have won that thing.”

Schatz was part of a torrid battle for third early in the race with Jason Johnson and Danny Lasoski. The trio went three-wide into turn three on one occasion. After winning that round, Schatz then worked on Logan Schuchart for the second spot, before getting a chance at Pittman, when the second and final caution flag of the night flew.

“At one point, you couldn’t even see him, he was so far out front in traffic,” noted Schatz of Pittman’s lead. “When your car is as good as his was, you hate to see those yellows. You can’t control these yellows in racing. That’s the nature of the beast. Some days it bites you and some days it doesn’t. This race team does an amazing job. The car felt really good in the dash and we made some changes and maybe went the wrong way. That’s racing. We’ll get another shot at it tomorrow and we’ll try again.”

For Schatz, it was his fifth career win in the Arnold Motor Supply Shootout at Clay County Fair Speedway and his series-leading 22nd of the season as he continues to chase his eighth series title aboard the Bad Boy Off-Road J&J for Tony Stewart Racing. The veteran driver has finished in the top-10 at Clay County in all 10 World Outlaws Craftsman Sprint Car series events at the track, dating back to 2007.

“The atmosphere here is incredible,” said Schatz. “I can remember the first time I came here in 1993 and was intimidated. The race track was a lot bigger and more flat back then. This is an incredible facility and the atmosphere at the fair is great. We were able to go out and enjoy some fair food before the races. The fans have always been great here and it’s great to come here.”

Pittman had to face a pair of restarts on Friday night. The first was of the double-file variety and he chose the low side, with Logan Schuchart lining up next to him. Schuchart looked low in turns one and two for the lead to no avail. On the green-white-checker finish, Pittman had Schatz starting on his bumper as the pair of champions battled for the $10,000 top prize.

“I was just thinking, ‘Finish the race and get the win,’” said Pittman of the green-white-checker finish. “We just didn’t get it done. It is what it is. The guy wins 30 races a year, because the rest of us aren’t smart enough to figure out how to win a race, myself included. We had a dominant car and just didn’t finish the job. At some point, hopefully we can learn something from it and get better. At this point, it’s just hard to swallow and we’ll move on.”

With his runner-up finish, Pittman moved to second in points. The driver of the Great Clips No. 9 for Kasey Kahne Racing has racked up 19 straight top-10 finishes, with 14 of those being top-five performances, with five runner-up finishes.

“The guys gave me a good car,” shared Pittman. “We had a really good car. I thought we were getting through traffic pretty well and it didn’t matter, because we finished second.”

Brad Sweet used a strong restart with two laps to go, as he got around Schuchart to take third. Sweet has now finished in the top-three in four of the last six races in the Ollie’s Bargain Outlet machine. He kept pace with his teammate Pittman, as the pair, along with David Gravel continues to battle for the second spot in points.

“It was a good race,” Sweet said. “The last two laps it was going to be tough. Donny (Schatz) got up on the wheel and Daryn (Pittman) had been very fast. We were able to get a good restart and got to third. We struggled in (turns) one and two. I just didn’t have the car to get down the back straightaway there. We were pretty good in (turns) three and four up on top. Hats off to my guys. We keep getting these top-three finishes and we’ll get the wins. We’ll move on to the next one tomorrow and hopefully we can get it done.”

Logan Schuchart, who was involved in great battles throughout the race, ended up fourth for the Shark Racing team. Shane Stewart crossed the line fifth, with Danny Lasoski, the reigning National Sprint League champion, in sixth. Jason Sides was seventh, followed by Jason Johnson in eighth, Kerry Madsen, picked up the the KSE Hard Charger Award, coming from 22nd to ninth, after having to change an engine, following a heat race. Terry McCarl rounded out the top-10.

The World of Outlaws Craftsman Sprint Car Series and National Sprint League return to action on Saturday, September 17 at U.S. 36 Raceway in Osborn, Mo., for the running of the FVP Missouri High Banked Nationals.

RACE NOTES:  Series points leader and defending champ Donny Schatz stole the finish from Daryn Pittman on a single-file restart with two laps to go. Pittman, who had held the lead throughout the race, staving off multiple attacks from Logan Schuchart, finished second, with Brad Sweet in third.