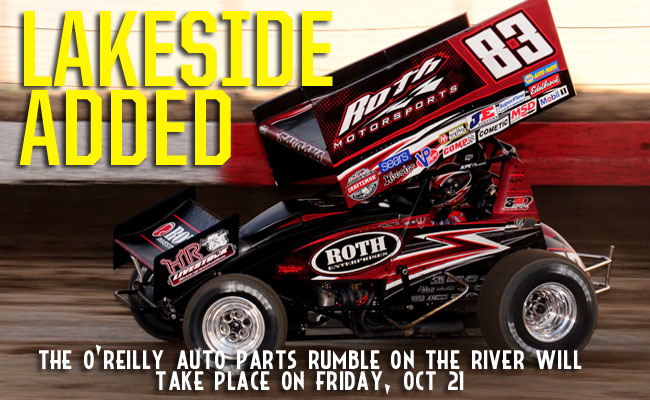 The O’Reilly Auto Parts Rumble on the River is a special addition to the 2016 season as it joins the previously rescheduled event at Salina (Okla.) Highbanks Speedway the following day on Saturday, Oct. 22. Those two events are the last ones on the schedule before the Bad Boy Buggies World of Outlaws World Finals, Oct. 27 to 29.

Lakeside is a longtime staple on the World of Outlaws schedule with 17 appearances dating back to 1980. This season’s event will be the seventh straight for the track on the series schedule.

“The World of Outlaws looks forward returning to Lakeside Speedway this season,” said World of Outlaws Craftsman Sprint Car Series Director Carlton Reimers. “With a long history at the track, this is a great way to help close out the 2016 season.”

Last season, Donny Schatz powered his way through the field to score his 18th win in a record-setting season that saw him score his seventh World of Outlaws Craftsman Sprint Car Series championship.

Tickets for the O’Reilly Auto Parts Rumble on the River can be purchased online at http://slspromotions.ticketforce.com, or by calling 815-344-2023.

Starting Sept. 15, fans will receive a $5 OFF special when purchasing a general admission ticket at participating O’Reilly Auto Parts stores.