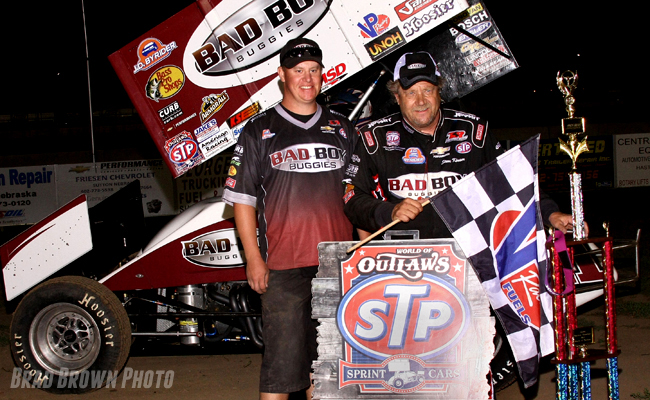 Steve Kinser Slides to His Second Victory of the Season

McCOOL JUNCTION, Neb. – August 13, 2013 – Steve Kinser has returned to victory, bringing cheers from the crowd as the 20-time World of Outlaws STP Sprint Car Series champion climbed from his car at the end of the 30-lap feature at Junction Motor Speedway on Tuesday night.

Kerry Madsen, who started on the pole, tightened the battle for the lead towards the end of the feature event, even leading lap 28. Madsen lost the lead on the next laps and settled for second. Donny Schatz, who is coming off his seventh FVP Knoxville Nationals title, rounded out the podium.

Kinser dominated much of the feature in his Bad Boy Buggies Maxim until around lap 20 when Aussie Madsen ran him down after Kinser struggled on the exit of turn four on a couple of occasions. As Kinser struggled to weave around lap cars, Madsen drew nearer by nearly throwing his car onto the bottom of one and two and willing the car to stick. On lap 25 Madsen passed Kinser for the first time, but Kinser stuck with him and won the drag race on the back stretch.

After regrouping and stalking Kinser for a few more laps, he again charged past Kinser, this time coming to the start/finish line, but Kinser made a strong run through one and two to regain the lead. Kinser pushed past lap cars to get distance between he and Madsen and he secured just enough room to keep Madsen at bay at return to victory lane.

The crowd roared as Kinser exited his machine in victory lane.

“It was a pretty tough last four laps, I saw Kerry underneath me a few time and smartly drove it up into the cushion and let him get a run on me,” said Kinser, of Bloomington, Ind. “When he slid up he tried to get back down, but I had enough momentum to get back around him. I haven’t had a chance to start on the front very often. These cars are so evil and so fast, if you get a good draw, you have to take advantage of it.”

The runner-up marked a strong start to the second half of the season for Madsen.

“I sat behind him after I got by Justin, I’m faster than him and I’m fitter than him and I just thought it was going to happen and it didn’t,” said Madsen, of St. Marys, N.S.W., Australia and driver of the Keneric Racing car. “I had a real strong night and it should be a strong kick off for the second half of the season. I don’t feel like I made any mistake tonight and we had a strong race car, it just didn’t happen for us tonight.”

Schatz kept up consistent finishes with another podium finish, a streak going since the Kings Royal, nine events in total.

“We’ve had a good run here at McCool, it was pretty tricky tonight,” said Schatz, of Fargo, N.D. “It was awfully fast up top. It was good to be up there and have a fast car, just not fast enough win tonight. Justin kept making mistakes and we’d get a run on him and he’d come down for the blocker. You just have to keep trying, I was able to get a little moisture in one and two and it worked a few times. I’d have liked to have gotten up there to race with Kerry and Steve, but the checkered flags fell first.”

Henderson again had a strong run with the series, fresh off of a third-place finish at the prestigious 53rd FVP Knoxville Nationals, he followed it up with a fourth-place finish. Another Knoxville Raceway regular, Ian Madsen, earned the KSE Hard Charger by passing seven cars en route to a thirteenth place finish on a track that was less than conducive to passing due to incredible speeds.

The event started off with Daryn Pittman demolishing the previous track record of 13.872-seconds with a time of 13.586-seconds. Pittman wasn’t alone in beating the previous record, as sixteen other drivers joined him under the mark. The mark was unofficially bested in the dash by dash winner Kerry Madsen who posted a time of 13.270-seconds.

The ongoing battle atop the World of Outlaws STP Sprint Car Series Championship standings continues as Schatz continues to narrow the gap finishing three spots ahead of Pittman in tonight’s event. Schatz now trails Pittman by just 67 points as the duo fight tooth and nail for every last point.

The World of Outlaws STP Sprint Car Series gets a couple days off as the series heads north for the second race of the season at River Cities Speedway on Friday night in Grand Forks, N.D., before heading to Nodak Speedway on Sunday night in Minot, N.D

NOTES – Daryn Pittman was the fastest qualifier around the semi-banked 3/8-mile oval with a time of 13.586 seconds to earn five championship points. Also earning points were Paul McMahan (4 points), Donny Schatz (3), Justin Henderson (2) and Joey Saldana (1). … Steve Kinser, Kerry madsen, and Craig Dollansky won heat races. … The dash draw was a 6 for the 31st time this year. … Kerry Madsen won the dash for the first time this year.