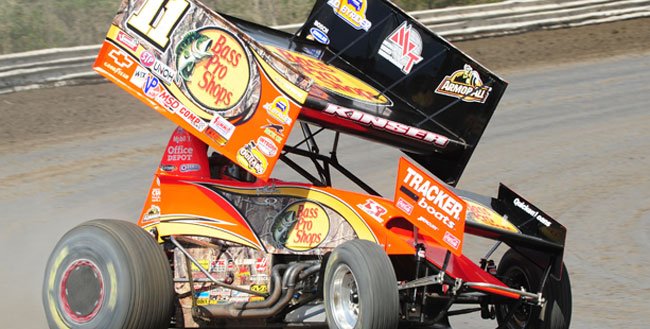 In 38 World of Outlaws events at the high-banked, one-third mile track, Steve Kinser has claimed 15 victories and his cousin, Mark, has picked up seven wins. In fact, a Kinser was parked in Victory Lane at least once each season between 1990 and 2003.

After not racing at Eagle Raceway the past two years, the World of Outlaws will return to the fast, action-packed track on Friday, April 27, for the NAPA Auto Parts Outlaw Showdown.

“It’s a track that seems to fit the stuff that me and (crew chief) Scott (Gerkin) do,” Steve Kinser said. “Some of the shorter, high-banked tracks we struggle on, but Eagle is a little different. I’m looking forward to returning.”

While the Kinsers have been dominant in the past, there have been five different winners since Steve swept both events in 2005. Danny Lasoski won the last race in 2009 – the same year Sammy Swindell set the track record with a lap of 11.076 seconds.

Craig Dollansky was victorious in 2008, Joey Saldana in 2007, and Daryn Pittman and Donny Schatz each won an event in 2006.

“In today’s competition, everybody splits it up pretty good,” Kinser said.

There is a ticket special with a $5 discount on general admission at all participating NAPA Auto Parts stores. With the discount, adult tickets are only $30 and children ages 6 to 12 are only $10.

Grandstands are scheduled to open at 4 p.m. with hot laps set for slated for 6:30 p.m.