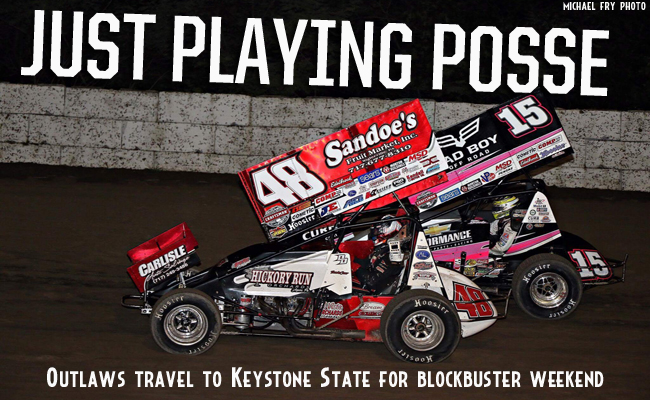 CONCORD, N.C. – Oct. 13, 2016 – The World of Outlaws and Pennsylvania Posse will butt bumpers for one last weekend in 2016. The Series will meet the Posse at Williams Grove Speedway on Friday, October 14 for the Champion Racing Oil National Open and Port Royal Speedway on Saturday, October 15. The weekend will be an extension of last week’s barn-burner at Fulton. But this time, the Outlaws will be in Posse territory.

Featured in a satellite event of NAPA Auto Parts Super DIRT Week, the World of Outlaws Craftsman® Sprint Car Series rekindled a fiery battle between the Pennsylvania Posse on neutral soil. But the Upstate New York track ultimately hosted the prelude to this weekend’s Pennsylvania stretch.

On Saturday night – an event that ended with 28 of 32 drivers breaking the track record – seven-time World of Outlaws Champion Donny Schatz was cornered by two of the four Posse drivers entered in the race. Schatz, who had not won at the track since 2006, was tested by Pennsylvania drivers Lucas Wolfe and Danny Dietrich. Dietrich, one of eight drivers in the first batch to record a sub 13-second lap time in the track’s history, gunned for the front early in the feature.

Though Dietrich ended up losing the battle to Schatz and Wolfe, he owed his podium finish to starting second in the Craftsman Club® Dash. He did not budge in the dash and started second in the feature, which allowed him the open track to beat Schatz to the green flag. He just could not finish the 30-lapper flag-to-flag.

“This weekend all depends on what we’re going to draw,” said Dietrich, wishing he could have finished the job. “That’s going to be a big factor at The Grove. We’re excited to get back racing for good money with the Outlaws and The Grove.”

Dietrich traveled five hours to Fulton, New York to take home the third-place prize money of $3,200. To him, the dollar amount made the trip worthwhile. But the stakes for Williams Grove, which is at his doorstep, make the National Open even more alluring.  The event is now a $25,000-to-win, $1,000-to-start payoff for the 40-lap feature. Start time will be 7:30 p.m. on Friday, October 14.

The Outlaws-PA Posse rivalry is currently even at 2-2. Dietrich is seeking an Outlaws upset, while Wolfe is looking for revenge from Port Royal 2015.

“It’s a good rivalry,” Dietrich said. “Some guys might take it a little too far, but it’s good for the sport. You need a rivalry. You need people who don’t like each other, and you need people to say things that shouldn’t have been said sometimes.”

Stevie Smith picked up his first win in 24 years at Williams Grove last season, while Wolfe lost the battle to Platinum drivers Brad Sweet and Daryn Pittman at Port Royal.

Dietrich applauded the rivalry’s storied history, claiming that the Outlaws visiting the Keystone state for the sixth time offers a level of completion like none other. The Outlaws’ stout group, coupled with the Posse’s track experience, creates an even playing field when the green flag drops.

Moreover, he looks at it from a fan perspective. In the Outlaws’ frequent stops, empty seats in the grandstands have been scarce if not non-existent. The rivalry riles up the fans for the impending wheel-to-wheel action.

“[The rivalry] keeps fans coming back, and without them, we wouldn’t be doing what we’re doing,” Dietrich said. “It’ll be a good Outlaw-Posse rivalry this weekend, and we’ll see who comes out on top.”

For LIVE video coverage of the Champion Oil National Open, visit dirtvision.com. A free audio broadcast will be available for the Outlaws’ trip to Port Royal Speedway.