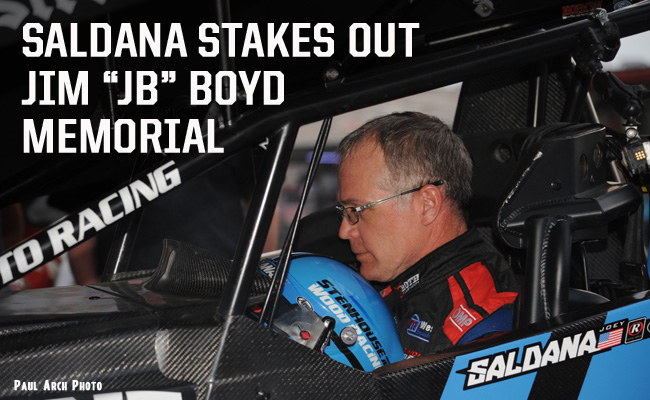 Last year, Bill Balog was victorious in the Jim “JB” Boyd Memorial, earning his first career World of Outlaws Craftsman Sprint Car Series win. The win was a popular one for the native of Alaska, who now calls Wisconsin home.

Joey Saldana is the only driver who has won the Jim “JB” Boyd Memorial more than once, taking the checkered flag in the inaugural race in 2010 and repeating in 2011. In each of the last six editions of the race, a different driver has visited victory lane, including eight-time series champion Donny Schatz, along with Brad Sweet, Craig Dollansky, Kraig Kinser, Saldana and Balog.

Saldana has a total of three wins at Beaver Dam Raceway, as does 2013 series champion Daryn Pittman, which is at the top of the leaderboard of all current full-time series drivers. Schatz has a pair of wins at Beaver Dam in his career.

Sweet’s win at Beaver Dam Raceway came in 2014, a night after a horrific accident in Iowa split his car in half and injured his leg. The California native is currently second in points and has picked up four wins this season, including the $25,000-to-win Jackson Nationals in Minnesota.

Shane Stewart, who is currently fifth in points has been very consistent at Beaver Dam, recording five top-10 finishes in seven starts. Veteran drivers Jason Sides and Paul McMahan have nine and eight top-10 finishes at the track, respectively.

David Gravel, who is currently third in points, has four top-10 finishes in five starts at the high-banked, third-mile. Gravel already has eight wins this season, which is second only to Schatz, who has 10 victories. Logan Schuchart has a pair of top-10 finishes at the track, while his Shark Racing teammate Jacob Allen, finished a career-best ninth at Beaver Dam last year. Schuchart, the grandson of Hall of Famer Bobby Allen, has three wins thus far in 2017.

Tickets for the 8th Annual Jim “JB” Boyd Memorial presented by Karavan Trailers, featuring the World of Outlaws Craftsman Sprint Car Series at Beaver Dam Raceway in Wisconsin on Saturday, June 24 and can be purchased online or by calling SLS Promotions at 815-344-2023 and at the track on race day.