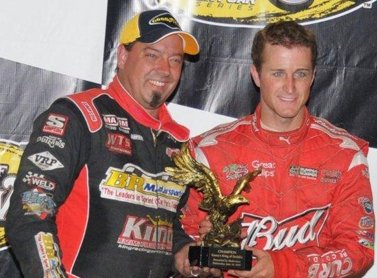 Toward the end of the 2009 season, Sides began finding a groove. He carried that momentum throughout 2010 and after a busy winter of racing in Australia he aims to be a championship contender beginning with the DIRTcar Nationals by University of Northwestern Ohio beginning on Feb. 8 at Volusia Speedway Park.

Many eyes were on the driver from Bartlett, Tenn., when last season kicked off and Sides didn’t disappoint. Piloting his #7s Maxim, he picked up four victories, 26 Top Fives, and 53 Top 10s. Among the victories was a win at Missouri State Fair Speedway during Kasey Kahne’s King of Sedalia event.

“As good as 2009 was, 2010 was that much better,” said Sides, who finished fifth in the final championship standings. “It was a due to the hard work we’ve been putting in and just persevering.”

The 2003 Kevin Gobrecht Rookie of the Year is now approaching a decade of traveling and racing with “The Greatest Show on Dirt.” In that time, Sides has learned a key to success that has helped him over the years.

“Each year you have to set goals and look to improve on what you accomplished the year before,” Sides said. No doubt he’s achieved those goals.

Following his four-win World of Outlaws season, Sides took a racing trip “Down Under,” with several other Sprint Car drivers to compete in Australia.

“We were really happy to go down there and pick up a couple of victories to keep our momentum going,” said Sides, the 2004 Kings Royal winner.

Now he’s headed to Florida and ready to chase the World of Outlaws title once again. His experience tells him a quick start is key to long-term success.

“How you run at the beginning season sets the tone for the rest of it so it’s crucial for us to come out strong,” Sides said.