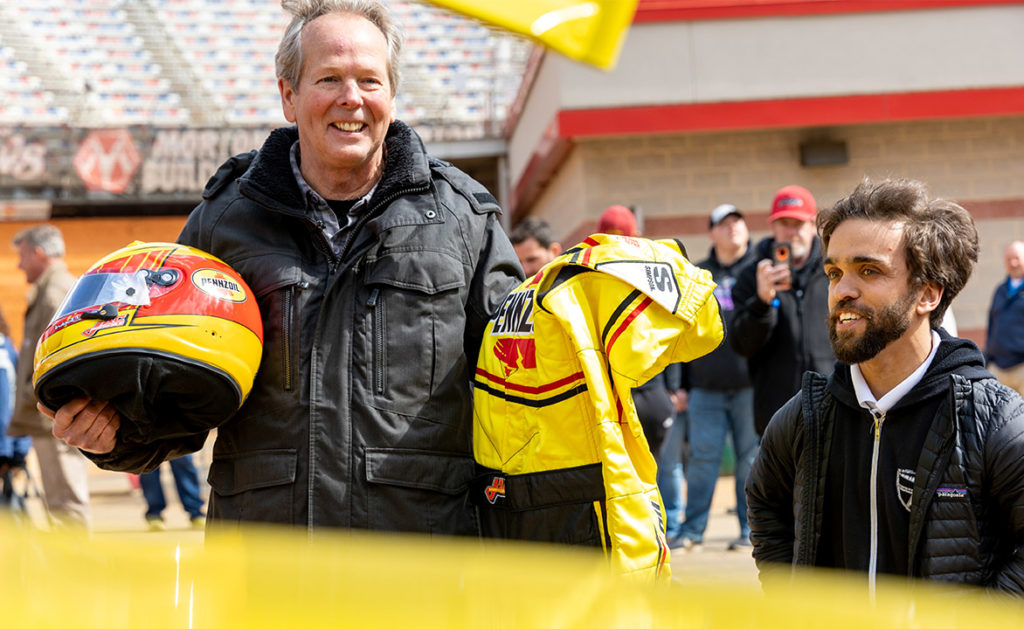 Jac Haudenschild was reunited with his iconic Pennzoil #22 livery, which he made famous with the World of Outlaws NOS Energy Drink Sprint Car Series, Thursday afternoon at Bristol Motor Speedway.

The unveiling was a surprise to the 72-time World of Outlaws winner when his Rico Abreu Racing team rolled out the eye-catching yellow and black car.

“We’ve had this in the works for a long time,” Rico Abreu said. “He had no idea this was happening. It’s been tough to keep it a secret, but it’s been worth it. I want to thank the team at Pennzoil for allowing all of this to happen. The 22 is legendary and Pennzoil was the backbone in bringing this revival to life. I’m sure seeing this car on track will bring back a lot of great memories for race fans. I can’t think of a better way to celebrate his final season.”

Celebrating nearly five decades of short-track competition, the 63-year-old will participate in a 25-race schedule aboard the legendary Pennzoil #22, kicking his 2021 tour with the World of Outlaws NOS Energy Drink Sprint Car Series during the, April 22-24, World of Outlaws Bristol Throwdown at “The Last Great Colosseum.”

In a salute to “Wild Child” fans across the nation, Haudenschild’s Farewell Tour will feature some of the World of Outlaws’ most touted events, such as the Brad Doty Classic at Attica Raceway Park, Eldora Speedway’s Kings Royal, the Ironman 55 at Federated Auto Parts Raceway at I-55 and Silver Dollar Speedway’s Gold Cup.

Owned by the late Jack Elden, the Pennzoil #22 was a prominent figure on the World of Outlaws Sprint Car Series trail throughout the mid to late 1990s. With the Wild Child at the helm, the Pennzoil #22 team acquired success during many of Sprint Car racing’s premier events such as Eldora Speedway’s $100,000-to-win Historical Big One in 1993, a pair of Eldora Speedway Kings Royal victories in 1994 and 1998, and a Gold Cup victory in Chico, California, in 1998.

“Jac is my hero and what better way to honor a hero than reviving a car that’s most synonymous with his career,” Abreu added. “It’s going to be a fun, but emotional summer.”

For tickets to the April 22-24 Bristol Throwdown, you can get your tickets at BristolMotorSpeedway.com.

THE ULTIMATE GLADIATOR: David Gravel Gets $25,000 for Sweeping Outlaws at Bristol