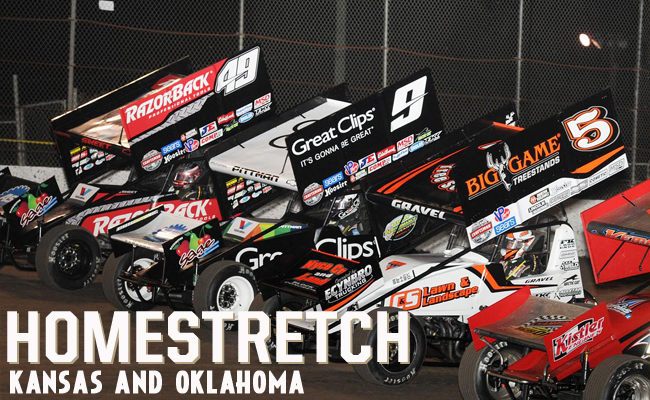 CONCORD, N.C. — Oct. 1, 2016 — The World of Outlaws Craftsman® Sprint Car Series season is coming to a close, and the series’ Platinum drivers are feeling the heat approaching the prestigious Bad Boy Off Road World Finals. But just before that, the teams will string together two barn-burners at highly-regarded tracks, Lakeside Speedway (Kans.) on Friday, Oct. 21 and Salina Highbanks Speedway (Okla.) on Saturday, Oct. 22.

The Outlaws will be making their eighteenth trip to Lakeside Speedway, a slightly banked 3/8-mile oval. Dating back to 1980, the series raced on both a dirt and paved course; it was a paved half-mile course for the 1991 and 1992 season. Donny Schatz was the most recent full-timer to take the checkers on July 1, 2015. Schatz, nearly solidifying his eighth series championship this year, will be accompanied by those in a tighter points battle behind him.

Behind Schatz is a three-way points battle for dibs on the No. 2 spot. Daryn Pittman, David Gravel and Brad Sweet are within 12 points of each other with the series schedule winding down. Sweet, who said the two tracks have been good to him in the past, is seeking to leap into second place in points before heading into World Finals. Sweet recorded a top-ten finish in his last series race at Lakeside.

“We’ve always had great success at Lakeside, so we’re excited to go out there,” Sweet said. “It’s the homestretch, so to speak, so hopefully we finish the year on a good note. We’re really shooting for that second in points, and Daryn and David are really tight in points. It’s a really big weekend in the last few races here. Hopefully we’ll end up second in points.”

Salina Highbanks Speedway is a fast-action 3/8-mile track like Lakeside. This will be the Outlaws’ fifth show at the track since 2011. For Shane Stewart, who recorded two consecutive wins in mid-September, Salina will be his homecoming show – matched by Devil’s Bowl in Mesquite, Texas. The Tulsa, Oklahoma native won last season’s stop at the track; moreover, it was in front of his family and friends.

“Both tracks are pretty quick and have a lot of speed,” Stewart said. “But Salina is a little bit more special to me just because I was born and raised in Tulsa, and it’s more or less a hometown track for me. It’s always one of those races I put on my schedule to win. It means a lot to be able to win in front of your friends and family. They don’t ever really get to see you race because we don’t go around there much anymore. Being that close to where I was raised and cutting my teeth Sprint car racing, yeah, it’s a huge race for me.”

Stewart is also in a tight points race, tied with longtime World of Outlaws superstar Joey Saldana. With two tight points battles between six drivers deciding the top-five heading into World Finals, the drivers are seeking to gain leverage in both the points and in momentum against the others.

“It’s our last race of the season so everyone wants to do well [at the Dirt Track at Charlotte],” Stewart said. “You always get good cars there, and their car counts are always big. Plus, there are a lot of people who attend that race. You want to run well at Charlotte. Hopefully we can have two good showings at Lakeside and Salina, and go into World Finals with a little bit of confidence.”

Get tickets for Lakeside Speedway and Salina Highbanks Speedway.