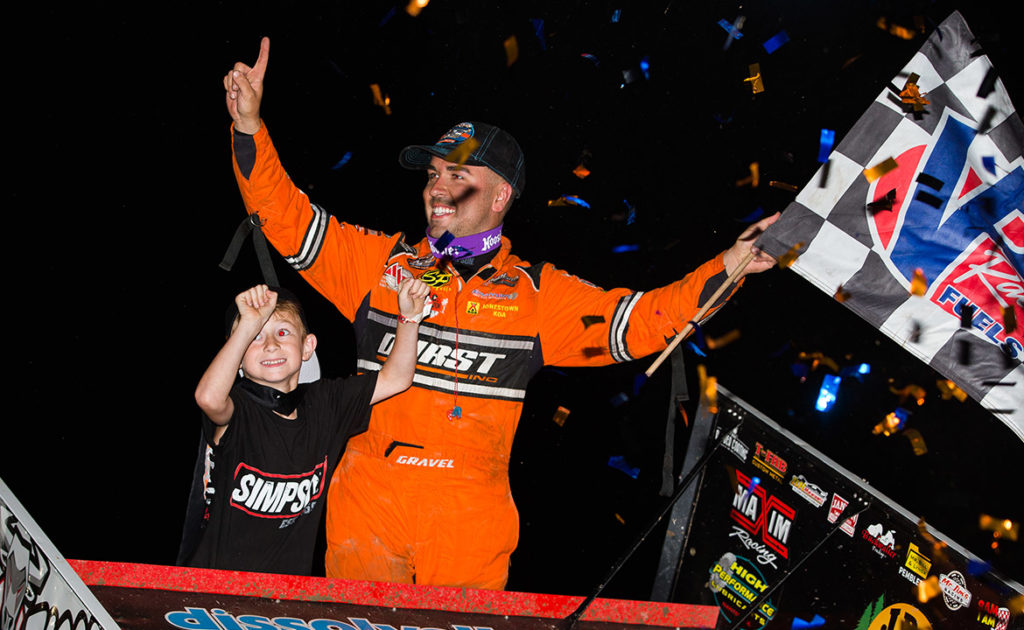 David Gravel’s hometown is about 1,000 miles away from Wilmot Raceway, yet he’s starting to consider the Wisconsin raceway his new home track.

While occupying Victory Lane for the fourth time in his career at the raceway Saturday night, the Watertown, CT native even joked he’d consider moving there with how well the track has treated him in his career.

When the green flag waved for his sixth visit at the track, Gravel went flag to flag for another win. He led all 40 laps to claim his second win of 2020 with Jason Johnson Racing and pick up the $10,000 top prize for the night.

“This has been an awesome town for me,” Gravel said, causing an eruption of cheers from the grandstands. “It’s always awesome to come here. For some reason this place suits me really well. (Crew Chief) Philip (Dietz) gave me a great race car. The guys have been working really hard. I’ve been pretty hard to make happy here lately and tonight they did that.”

The win was another impressive accomplishment for Gravel, who had been struggling for consistency, but an even bigger one for Dietz. He’s now in a rare category of being a crew chief that has won back to back races with two drivers in two different cars. He won with Parker Price-Miller at 34 Raceway the night before, with the Dietz Motorsports #14 car that he co-owns with his wife Brooke, and then with Gravel and the Jason Johnson Racing #41 at Wilmot.

Price-Miller also led ever lap at 34 Raceway, en route to his second career win and first for Dietz Motorsports. He finished sixth at Wilmot.

While Gravel dominated the 40-lap Feature, he had to outlast several cautions and red flags as some drivers struggled to tackle the technical bullring.

Sheldon Haudenschild flipped early, but his Stenhouse Jr.-Marshall Racing crew, along with crew members from other teams, got his car repaired in time to get back on track. He fought his way to an impressive eighth-place finish.

One of the biggest surprises of the night was when reigning champion and current points leader Brad Sweet slowed to a stop in Turn 4 on Lap 16. The oil filter broke off of his car, ending his night early and forcing a 19th-place finish. With Logan Schuchart finishing third and 10-time Series champion Donny Schatz finishing fourth, Schatz is 84 points behind Sweet in second and Schuchart is 96 points back in third.

Gravel’s biggest competition of the night was Carson Macedo. The Kyle Larson Racing driver earned the pole for the Feature by winning the DIRTVision Fast Pass Dash. However, when the Feature started, Gravel launched ahead of Macedo and ran away with the lead – averaging about a two second lead throughout the event.

Macedo closed in while Gravel battled traffic but faded once the Mesilla Valley Transportation #41 found clean air again. Heavy traffic became a factor in the closing laps, allowing Macedo to make one last charge at Gravel. Time favored Gravel, though. The checkered flag was presented to Gravel with Macedo 0.375 seconds back.

“My race car was really good, especially there at the end,” Macedo said. “I knew early I was a little bit on the snug side, but I knew that my race car would get better and better. They made good adjustments during the (open) red… It was everything I had and more. That was as hard as I could go. I was trying as hard as I could to get to him. I felt like I was faster than him and I could get to him. But I made a mistake there and lost so much ground.”

Gravel is out of the championship points hunt due to missing a race at Volusia Speedway Park at the beginning of the year to run an ARCA Series car at Daytona, but that hasn’t diminished his drive to win – no matter if it’s a “home track” or not.

“We’re going to keep racing, keep having fun and keep winning races because that’s all that matters,” Gravel said.

Or as Jaxx Johnson said while doing his wing dance celebration with Gravel, “That’s how we do it!”

The World of Outlaws NOS Energy Drink Sprint Car Series on Sunday, July 12 concludes its triple-header weekend at the Terre Haute Action Track in Terre Haute, IN. Get tickets by clicking here.

If you can’t make it to the race, you can watch all of the action live on DIRTVision.com.