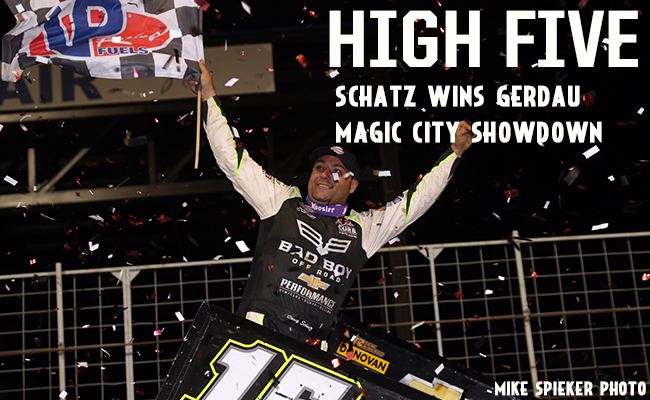 MINOT, N.D. — Aug. 28, 2016 — It took Donny Schatz until his seventh start to win at his home track of Nodak Speedway in Minot, North Dakota with the World of Outlaws Craftsman Sprint Car Series. Since that victory in 2012, he been undefeated in the Gerdau Magic City Showdown. Schatz extended his win streak at Nodak Speedway to five, after leading flag-to-flag on Sunday night at the three-eighths-mile.

Schatz started second and on the initial start ran second to pole sitter Logan Schuchart, but the first caution flag of the night flew before the lap was complete. That led to a complete restart and on the second start, Schatz was able to dive under Schuchart on the front straightaway to officially lead the first lap. Schatz was in traffic just five laps into the race and like his win on Friday night at River Cities Speedway, he masterfully weaved his way through the lapped machines.

“They are all special and they are all good,” said Schatz of his five wins at Nodak Speedway. “The trophies here are awesome and so are the people. Everything about this place is great. I’ll tell you what’s really great, and that is this race team. These guys (on my crew) deserve to be standing here. The race car they prepare each day is incredible. I’m the lucky guy that gets to drive it and looks good. Their hard work is what pays off and gets us to victory lane.”

With just two laps remaining in the 35-lap contest, a red flag flew, setting up a green-white-checker restart to determine the outcome. Schatz would use a strong restart to stay out front and opened a bit of a lead on the final circuit.

The win for Schatz helped him complete a sweep of the three races for the World of Outlaws Craftsman Sprint Car Series in his home state of North Dakota for the second straight. Schatz now has won 18 times overall with the series in North Dakota. The win was the 20th of the season for the seven-time and defending series champion, who has now won at least 20 races in four consecutive years.

“It doesn’t get any better than that,” said Schatz of winning in North Dakota. “When you are a kid, like these kids here in the crowd and you dream of doing something, that’s me. I’m standing here living my dream. Everybody all the times asks me how I am doing and I’m living my dream. Thank you fans for being part of it.”

Jason Johnson lined up eighth and used a late-race charge to finish second. A strong restart on lap-10, moved him up a couple of spots and pit him in a torrid battle with David Gravel for third. Johnson was able to take third on lap-15 and began to work on Schuchart for second. Another strong restart propelled Johnson to second as he set his sights on Schatz.

“We started a little bit further back, so we gambled with set-up,” said Johnson of his Priority Aviation team. “We’ve been searching a little bit and the guys definitely hit it right tonight. We had a really fast Maxim race car. Once we got to second, I was definitely wanting a restart. Donny (Schatz) is one of the best in the industry right now and he’s tough. He definitely makes us step up our game each night.”

On the green-white-checker restart, Johnson was able to look under Schatz in turns one and two, as he about pulled even with the leader, but could quite get enough of a run to attempt a pass. The second-place finish for Johnson was his 13th top-five finish of the season.

“I needed to get to him and I couldn’t quite clear him,” shared the 2016 Knoxville Nationals winner. “One thing about Donny is that he’ll race you clean, so I wanted to race him clean. Once we came down the back straightaway he had a little more momentum and our only chance was maybe if he would have bobbled, but that doesn’t happen very often.”

Daryn Pittman, who fell back to seventh at one point, during the 35-lap race, also made a late-race charge to finish third in the Great Clips No. 9. Pittman started sixth and over the second half of the race was able to pick up a number of positons on his way to his 36th top-five finish of the season.

“That was a fun race tonight,” said Pittman. “It was great track prep. From the driver’s seat it was pretty exciting and a lot of fun to drive. It took me too long to run the top in (turns) one and two. Once I was able to do that, I was making a lot of speed and down the back straight with a lot more mile an hour.”

Logan Schuchart continued his strong 2016 season by finishing fourth, which was his 10th top-five finish of the season. David Gravel crossed the line fifth, with Brad Sweet sixth. Joey Saldana was seventh, followed by Jacob Allen, who turned in an eighth-place run to put both Shark Racing cars in the top-10. Paul McMahan was ninth, with Dominic Scelzi rounding out the top-10.

The World of Outlaws Craftsman Sprint Car Series returns to action on Friday, September 2 and Saturday, September 3 in the Outlaw Energy Showdown at Skagit Speedway in Alger, Washington.