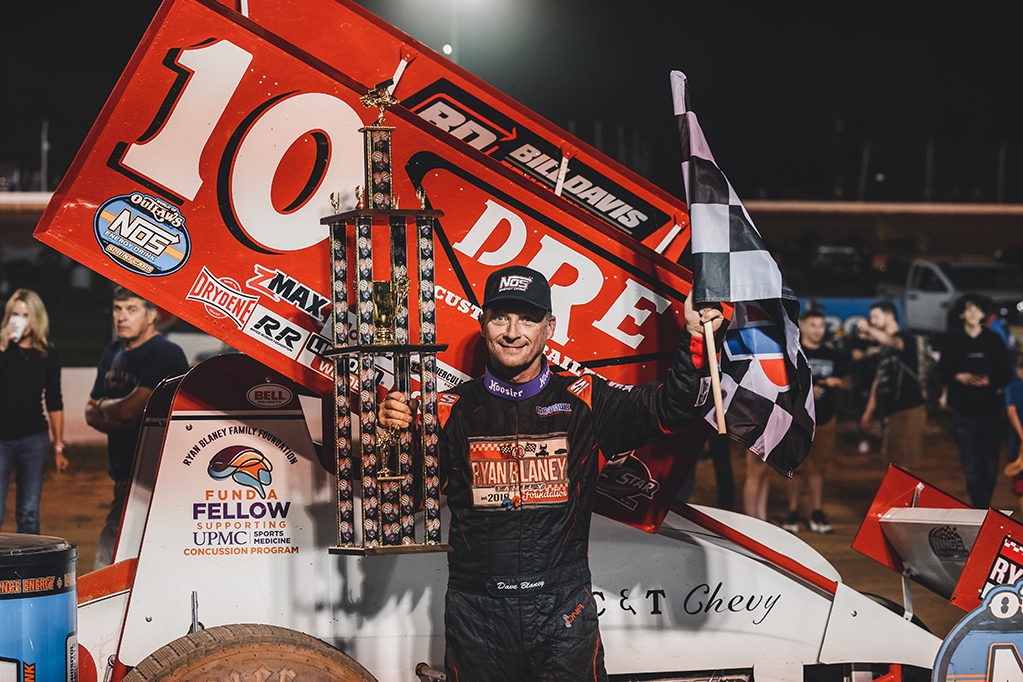 The World of Outlaws NOS Energy Drink Sprint Car Series ended a 14-year absence from Sharon Speedway on Saturday night, and promptly delivered the most magical moment of the 2021 season.

Dave Blaney, at 58-years-old, stunned Sheldon Haudenschild with a last-lap pass to score his 95th career victory at the track he owns in his home town of Hartford, Ohio. It was a storybook ending that sent his local crowd and the entire sprint car world into pandemonium.

You could actually feel the bleachers shaking as the decibels rose and fans sprinted to victory lane. It was a special moment for Blaney, who rose to fame as a Sprint Car legend in his prime during the 1990’s and now beat them again in the year 2021 with his own car.

“I feel like I had a Sprint Car career in the 90’s, but I don’t anymore,” Blaney explained. “I just come out and play, nowadays. It’s not lost on me that winning a World of Outlaws race in this day and age is giant; especially at a track I’m part-owner at. The response was just overwhelming.”

The historical significant of Blaney’s triumph is nothing to sell short.

He set the record for longest gap between World of Outlaws wins, striking at Sharon 23 years, 7 months, 2 days after his last victory at Southern New Mexico Speedway on October 21, 1997. He also broke the record for longest gap between a first and last career victory, making it 36 years, 1 month, 16 days between his April 5, 1985 win at Tri-City (IL) Speedway and Saturday’s score.

Blaney also came close to being the oldest winner in the history of the World of Outlaws NOS Energy Drink Sprint Car Series. He topped Sharon’s Outlaw return at the age of 58 years, 6 months, 29 days. The record still belongs to Sammy Swindell, winning Eldora in 2014 at 58 years, 8 months, 16 days.

The best part of it all? Blaney wasn’t even surprised.

“Yeah, I can believe it actually,” Blaney told DIRTVision’s Chase Raudman. “I thought we had a car that could come here and be competitive. We’ve raced here quite a few times with this car and it’s ran really well. To have it actually work out is pretty crazy, though. This is really awesome.”

Coming back in the year 2021 and doing it against today’s modern crop of Outlaws is something that gives Blaney an extra sense of appreciation.

“This is such a proud moment for us,” Blaney admitted. “This is a car we built ourselves and we just beat the Outlaws. Holy crap. It’s a dream come true, and it happened at my home track.”

Blaney’s sudden victory stole the spotlight from Sheldon Haudenschild, who dominated the Feature for the opening 30 laps. By the halfway point, the NOS Energy Drink #17 has built a massive 7+ second lead and lapped inside the top-ten. He was gone, and yet another win was in the bag, but the caution flew for a slowing Aaron Reutzel on Lap 31.

It gave Blaney the one opportunity he needed, and he capitalized on it.

“I knew that was my only chance,” Blaney said. “That caution saved us, no doubt. I could see him up there and the lappers were catching him on the bottom, so the top was slowing down. He wasn’t going to move off it, so I thought I had a chance if I could get alongside him. I thought we were dead with two to go, but that mistake all we needed.”

That mistake came on the final lap as Haudenschild rode the rim through turns one and two. However, the NOS Energy Drink #17 got too tight and he hit the wall. Blaney rolled by and beat him to the line by 0.802-seconds.

“I let my guys down,” Haudenschild mentioned. “We’ve got a really fast race car, but I just pushed too hard and lost my momentum. Sometimes you get beat. If I’m gonna lose to anybody, I’m glad it’s Dave. He and my dad [Jac Haudenschild] grew up racing so far him to get an Outlaw win this late in his career at his home track, that’s special for the Blaney family.”

It was an Ohio 1-2, and more importantly, a historical night that many will remember forever.

Closing out the top five at Sharon Speedway was Carson Macedo in the final podium spot with the Jason Johnson Racing #41, David Gravel in fourth aboard his Big Game Motorsports #2, and Brad Sweet in the Kasey Kahne Racing #49.

Rounding out the top ten on Saturday night was Brent Marks in sixth, Brock Zearfoss in seventh, Logan Schuchart in eighth, Kraig Kinser in ninth, and James McFadden in tenth.

UP NEXT: The World of Outlaws NOS Energy Drink Sprint Car Series returns to “The Hoosier State” for a Memorial Day Weekend in Indiana. On Friday, May 28, The Greatest Show on Dirt visits Terre Haute Action Track before rolling over to Lawrenceburg Speedway on Monday, May 31.