Skip to content
Hats Off to Capitani
Tags: Knoxville Raceway 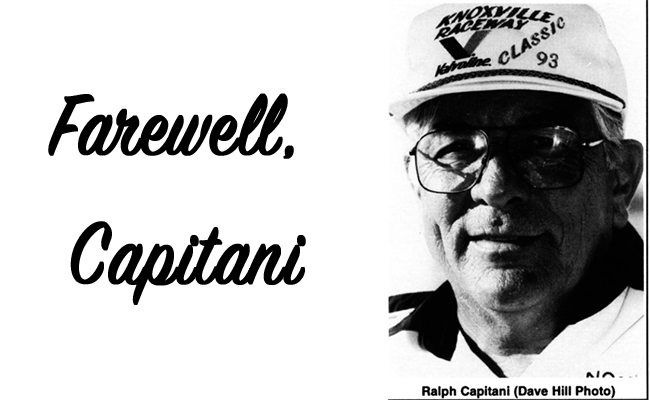 The World of Outlaws extends its deepest condolences to the family and friends of Ralph Capitani.

Capitani was instrumental in growing the sport of sprint car racing, and more significantly, in the overall growth and development of the legendary Knoxville Nationals.

“Ralph was a visionary promoter in the sprint car racing world,” said World of Outlaws CEO Brian Carter. “I enjoyed the opportunities I had to learn while working with him. We will miss him.”

In 1978, while Ted Johnson was launching the World of Outlaws, Capitani commenced his dirt track racing career with Knoxville Raceway as director of racing. During his tenure there, Capitani worked hard to ramp up weekly racing and turn the Knoxville Nationals into the marquee event it is today. He also helped found the National Sprint Car Hall of Fame and Museum in 1985 and the National 360 Sprint Car Council in 1993.

“Cappy has been voted the National Sprint Car Poll’s ‘Promoter of the Year’ on three occasions (1985, 1990, 1991), and has consistently been named one of the poll’s top three most powerful leaders in the sport (with Ted Johnson and Earl Baltes) since its inception.” reads his 2014 award profile on the National Sprint Car Hall of Fame website.

Services for Capitani will be announced at a later date.