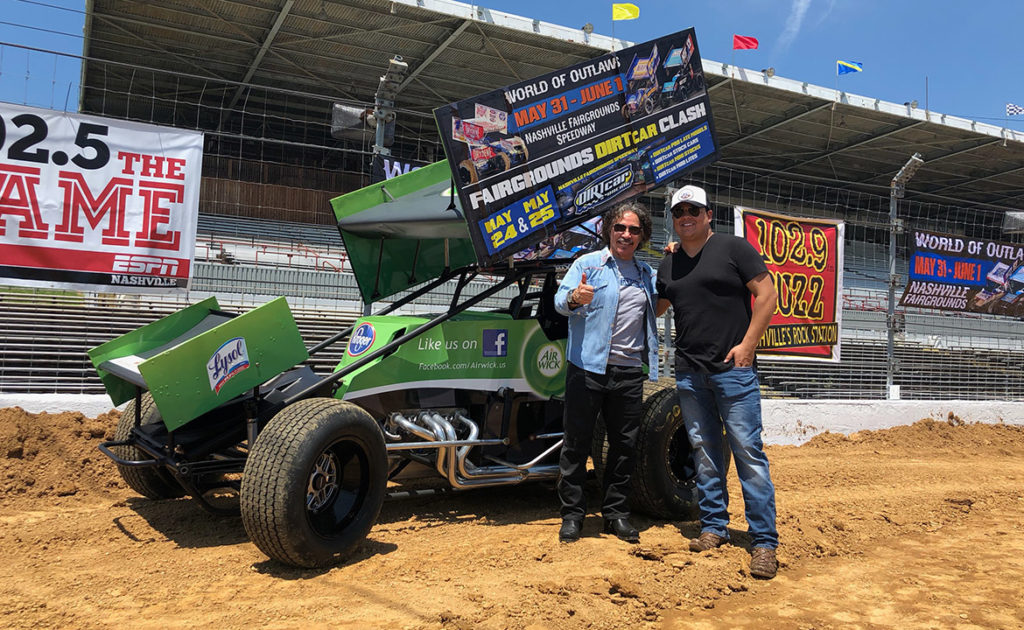 NASHVILLE, TN — May 17, 2019 — Covering the Nashville Fairgrounds Speedway quarter-mile oval with dirt for the upcoming Music City Outlaw Nationals is no small task, so the World of Outlaws put out the call for assistance and Hall of Fame rocker John Oates together with country star Tim Duggar answered on Friday.

Oates and Duggar helped the team finish off the racing surface, which will see two weekends of premier dirt racing action. The Fairgrounds DIRTcar Clash kicks things off on Saturday, May 25, setting the stage for the hugely popular high-powered, winged warriors of the World of Outlaws NOS Energy Drink Sprint Car Series on May 31-June 1.

It turns out Oates knows a little about dirt track racing and the World of Outlaws.

“I grew up in Pennsylvania and there was a dirt track near me called Hatfield Speedway when I was a little kid and that’s where I first saw the midgets and sprint cars under the lights and I got hooked,” said Oates, half of legendary Hall & Oates that was inducted into the Rock and Roll Hall of Fame in 2014. “I’ve always been a race fan ever since. I’ve done some racing myself, I’ve done some sports car racing, some long-distance racing and now I’m involved in vintage car racing. I just love all kinds of racing, I watch it all. Formula One, Indy Car, NASCAR, but sprint cars on dirt is a pretty amazing experience under the lights. I’m really excited to see them here in Nashville for the first time. Putting down dirt on this old amazing track is going to be a cool night.”

The Music City Outlaw Nationals will mark the inaugural appearance for the World of Outlaws NOS Energy Drink Sprint Cars in Nashville, and the only time all year they’ll race in Tennessee. Nashville is obviously at the heart of music, but major league sporting events have also gained a foothold in the city, which was just host to the NFL Draft.

“Nashville without a doubt is a hot city, it’s growing like crazy,” Oates said. “It’s just so cool that it’s become a destination for a lot of folks on all sorts of levels from business to entertainment. So having an incredible event with the World of Outlaws coming here is one more cool thing for people to say, ‘Wow, you come to Nashville and you get everything. You get music, you can see some racing. There’s a million things to do.’ It’s just one more feather in the cap for Nashville as a city.”

Oates and Duggar will be at the event, too. Oates will serve as a Grand Marshal on Friday, May 31. Duggar, who is a huge fan of sprint car racing and attends many events, will perform on Friday, May 31, and Saturday, June 1, at 4 p.m. both nights, before the cars take the track, and he’ll be a host of the Party Deck during the event.

More than $150,000 is up for grabs over the course of the event, making it one of the Outlaws’ biggest racing weekends all year. Drivers like Tony Stewart Racing’s 10-time champion Donny Schatz, Kasey Kahne Racing’s Brad Sweet, Kyle Larson Racing’s Carson Macedo and Ricky Stenhouse Jr. Racing’s Sheldon Haudenschild will all be trying to capture the Friday $15,000-to-win Feature and the Saturday $25,000-to-win Feature.

Tickets are available online at WorldofOutlaws.com or by calling 844-DIRT-TIX Monday through Friday between 9 a.m. and 5 p.m.

Honky Tonks & Sprint Cars: A Recipe for Success in Nashville