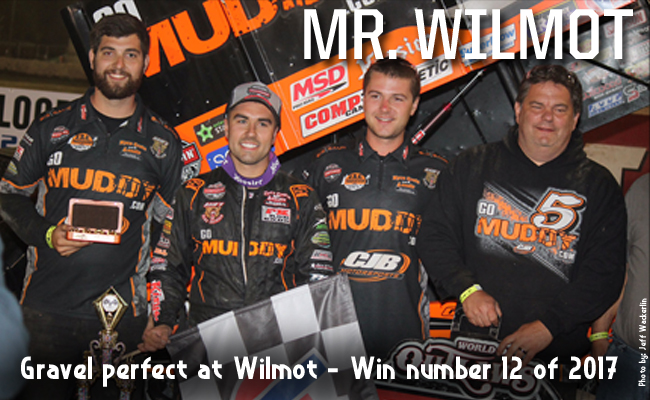 WILMOT, Wisc. — July 29, 2017 — If it was up to David Gravel he would race at Wilmot Raceway every week if he could. At least that’s what he jokingly said after winning for the third time in the same number of starts with the World of Outlaws Craftsman Sprint Car Series at Wilmot on Saturday night in the Badger 40. Gravel remains undefeated in three starts with the Outlaws at the third-mile in Southern Wisconsin.

Gravel used some late race heroics for the second straight night to take the lead with just two laps remaining en route to a thrilling win over Shane Stewart. That pair traded the lead four times officially, but unofficially swapped the lead numerous times in the late-going, with Gravel running the top of the track and Stewart a little lower.

“It’s been awesome racing here,” said Gravel. “Wisconsin is great. It doesn’t matter if we are at Beaver Dam (Raceway) or Cedar Lake (Speedway), the stands are always packed. They are just as good as Pennsylvania fans. It was racing with Shane. We both raced real hard.”

Gravel led on three separate occasions on Saturday night for a total of five laps, but for the second straight night, he led the most important one, the white flag lap. Gravel took the lead for the first time on lap-29 when Brad Sweet made contact with an infield tire, which dropped him from the point to third. Shane Stewart also moved up a spot at that point in time.

“I think I may have been to patient and Shane (Stewart) got by us,” shared Gravel. “Luckily Brad (Sweet) got into the infield tire and that gave us track position. I know we had a really good car. The track was awesome. The bottom was good and so was the top. It was even. The curb got out there really gnarly at the end and bit me a couple of times, but I knew that was the fastest place. I just had to play Russian roulette with the curb those last few laps and it worked out.”

Stewart started fourth and was up to third on the second lap and kept pace with Sweet and Gravel in the early going. With six laps to go the caution flag flew, which set up one final double-file restart with Stewart choosing the low side and Gravel up top. Following that unfurling of the green flag, the duo waged war, trading the lead at both ends of the track a number of times.

“It was exciting,” said Stewart. “I honestly felt like I drove a little too cautious there at the end. I was trying to block him and hit my lines. That team has been really, really good here lately and we were close. We were a lot closer than we have been lately. My guys continue to work crazy hours to make sure the car is ready each and every night. We just came up a little short tonight, but it was a fun race.

Stewart ran among the top-three for just about the duration of the 40-lap race. Late in the race, Stewart seemed to have an advantage on the lows sides of turns one and two, with Gravel getting the upper hand on the top side of turns three and four.

“I think that race could have gone anyway,” noted Stewart. “Obviously the little issue Brad had with the infield tire made it a lot more interesting. We’ll keep on digging and hopefully we can click off a few more wins before the Knoxville Nationals.”

Sweet took the lead on the opening lap in turns one and two from Paul McMahan, who started on the pole. He was just about to get to lapped traffic, when the first caution flag of the night flew on the eighth lap. Sweet chose the low line for the ensuing double file restart, with Gravel moving up to second and taking a peek for the lead on the high side of turn four. Sweet was able to maintain his lead in lapped traffic near the halfway point of the race. Gravel got a good run on Sweet on lap-28, with Sweet getting out of shape on the next lap, after contact with the infield tire in turn two.

“I’m tired of making mistakes,” said Sweet. “The NAPA guys are giving me a great race car each and every night. We are in contention to win every night. This one tonight is on me. It was driver error. I was trying to get through lapped cars. We were setting a good pace. The car felt great and I didn’t really have anything to complain about. Once you make a mistake with these guys they do a great job and Shane was right there. They capitalized on my mistake. I’m just happy it didn’t knock the front axle out and end out night.”

Sweet would end up finishing third, which was his 41st top-five finish of the season, which keeps him tied with eight-time and defending series champion Donny Schatz for the series lead in that department. Following a caution with just six laps remaining, Sweet was nearly three-wide for the lead with Gravel and Stewart going into turn one as he looked to rebound from the mishap earlier in the race.

“We’ll take a third and everyone needs to get home and get a break for a minute and regroup,” noted Sweet. “We have some of the biggest races coming up. We’ll keep our heads up and try o look forward and be positive and try to win some more of these races.”

Sheldon Haudenschild finished fourth, after lining up on the outside of the fifth row. Schatz worked his way to a fifth-place showing, after starting 13th. Logan Schuchart continued his recent string of strong finished with a sixth-place run. Jason Johnson crossed the line seventh, with McMahan in eighth, Daryn Pittman ninth and Brent Marks 10th.

The World of Outlaws Craftsman Sprint Car Series returns to action on Friday, August 4 with the Night Before the Ironman at Federated Auto Parts Raceway at I-55 in Pevely, Mo., followed by the $20,000-to-win Ironman 55 on Saturday, August 5.