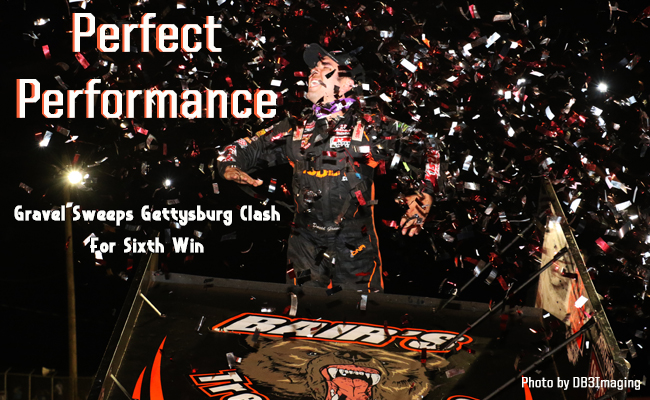 ABBOTTSTOWN, PA – May 17, 2017 – David Gravel dominated the World of Outlaws Craftsman® Sprint Car Series Gettysburg Clash at Lincoln Speedway on Wednesday night, leading all 35 laps of the Feature at the historic 3/8-mile track to take the checkered flag 6.501 seconds ahead of runner-up finisher Daryn Pittman.

The Feature win completed a perfect night for Gravel. The Watertown, CT driver was quickest in Flight A Time Trials before winning his Heat and the Craftsman Club Dash to earn the pole and eventually the Feature triumph that lifted the Outlaws over the Pennsylvania Posse in the first rivalry race of the season. It was both Gravel’s first career win at Lincoln and his sixth of the season with the Outlaws.

“It’s definitely huge,” Gravel said following his win. “World of Outlaws guys do not win many Outlaw shows in PA, so to win here is great, at a track that I haven’t really been good at in the past. To do that is awesome, to get our sixth win is awesome.”

“You never know when your next win will be and it’s been a couple weeks, so it’s good to get another one and keep clicking them off. Hopefully this momentum carries on to Williams Grove.”

Gravel used his pole starting position to jump out to an early lead over second-starting Pittman until the only caution of the race came on lap two when Freddie Rahmer of Salfordville, PA spun and stopped at the bottom of turn two.

Gravel enjoyed an open track for eight laps following the restart, but worked his way into lapped traffic on lap 10. The often side-by-side racing around the track created a number of challenges for the leaders as they worked through the field.

“It was real difficult just because I didn’t know what kind of lead I had,” Gravel said. “I got through the first couple lapped cars really well, but after that I didn’t know if guys were catching me or not. It was really tough to judge. I didn’t know I had a huge lead. It was just one of those things where I had to keep pushing forward and keep getting lapped cars behind me.”

Behind Gravel, it was local favorite Danny Dietrich of nearby Gettysburg, PA who worked his way past Brad Sweet and then Pittman to take second on lap 17. Dietrich was unable to gain any ground on Gravel to challenge for the lead while he battled the traffic.

“I got to second and couldn’t get any help at all from lapped cars,” Dietrich said. “It’s unfortunate because I thought we were fast enough to run with Gravel, but never got the opportunity.”

Dietrich held second until the final lap, when he made a daring move in turns one and two to move past a lapped car. The move cost him as he drifted up the track, allowing Pittman to capitalize and re-take the second spot.

“I was just trying to make something happen,” Dietrich said of his last lap move. “I felt like if I couldn’t get by the lapped cars, I was going to get passed anyways. I should have just probably settled in, but that’s hard to do when you’re running second for a World of Outlaws win.”

“Lapped traffic was hairy,” echoed Pittman. “I don’t know that they were really doing anything wrong, but they were just racing hard side-by-side and using up the whole track. Dietrich kind of got held up behind one of them and gave me a run to get back by him.”

Pittman was satisfied to earn a second-place finish after the last lap pass, especially against a field of 43 cars at a difficult track.

“We had a really solid car and a solid night,” Pittman said. “I’m not disappointed at all, but we were all racing for second. David was in a league of his own.”

Donny Schatz raced from the 15th starting position to finish fourth while KSE Hard Charger Brian Montieth advanced 15 positions to round out the top-five after starting 20th. Kevin Gobrecht rookie-of-the-year contender Sheldon Haudenschild was in the middle of a top-five battle when he did a complete 360 in turn two on lap 22 and the race continued without incident. The miscue cost Haudenschild four positions as he fell to eighth.

While Gravel started the night by setting quick time in Flight A qualifying with a time of 13.434 seconds, Dietrich was fastest in Flight B and overall at 13.328 seconds.

Gravel and Pittman won the first two heat races for the Outlaws before Dietrich and Rahmer answered for the Posse with wins in heats three and four, respectively. Gravel’s dash win was sandwiched between a C-Main victory for Binghamton, NY driver Coleman Gulick and Lucas Wolfe’s win in the Last Chance Showdown.

The World of Outlaws Craftsman Sprint Car Series remains in Central Pennsylvania entering the weekend for the Morgan Cup at Williams Grove Speedway on May 19 and 20. It’s the first of five races at the Mechanicsburg, PA track this season. Fans who can’t make it to the track can watch LIVE on DIRTvision.

For complete results from the Gettysburg Clash at Lincoln Speedway, click here.