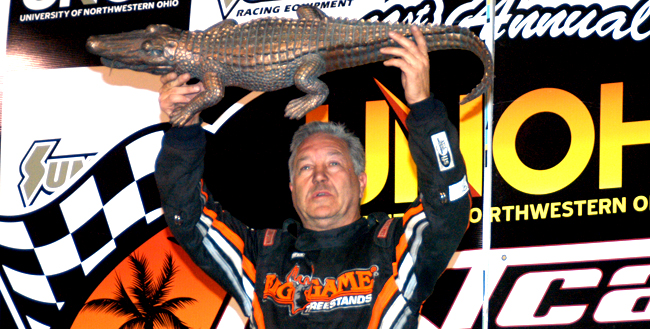 BARBERVILLE, Fla. — Jan. 24, 2013 — If it wasn’t bronzed, the gator, which stands three feet long and weighs a little more than eight pounds, would appear lifelike.

To say that the UNOH DIRTcar Nationals Presented by Summit Racing Equipment has a unique trophy is an understatement. It certainly catches attention, including that of last season’s winner – Sammy Swindell.

“I’ve had a bunch of different things, but that was my first gator,” he said of his trophy collection. “It’s sitting on the floor in my shop so it scares a few people and about every dog that walks in.”

Swindell claimed the 41st edition of the prestigious speedweek at Volusia Speedway Park, which kicks off this season on Feb. 13 with two days of UNOH All Star Circuit of Champions competition followed by the season-opening, three-day event for the World of Outlaws STP Sprint Car Series Feb. 15-17.

To receive the coveted trophy, drivers earn points through qualifying, heat races and feature events on all five days of racing on the world’s fastest half-mile track. Last year, Swindell didn’t win any of the races at Volusia Speedway Park, but his three top fives, four top 10s and an average feature finish of 6.6 garnered the title.

Swindell said the team improved upon everything last season, including the addition of a championship crew chief. Brian Bloomfield, who won World of Outlaws STP Sprint Car Series championships with Jason Meyers in 2010-11, will fill a key role for Swindell.

“It’s going to make my life a lot easier,” Swindell said. “He’s been in here for a few weeks now and I can see my role changing quite a bit over what it was last year. It’s going to give me some more time to focus on more of the things I need to do.”

Swindell isn’t the only former UNOH DIRTcar Nationals Presented by Summit champion with new changes. Joey Saldana, who claimed the crowns in 2010 and 2011, is now driving for Dan Motter in the familiar yellow No. 71m.

“For me, I love Volusia,” he said. “I think we’ve won that three times. It’s a track I like racing. I think everything I do as a driver and I think our car and everything, that’s a good place for us to go to and start the season. We’re going to a track I’ve had success at, I like racing. It’s good for all of your sponsors. I think it’s great. I’m very much looking forward to it.”

Oh, and then there’s going to be approximately 40 other top-notch drivers who want a piece of the unique trophy, which can also serve as a “guard gator.”