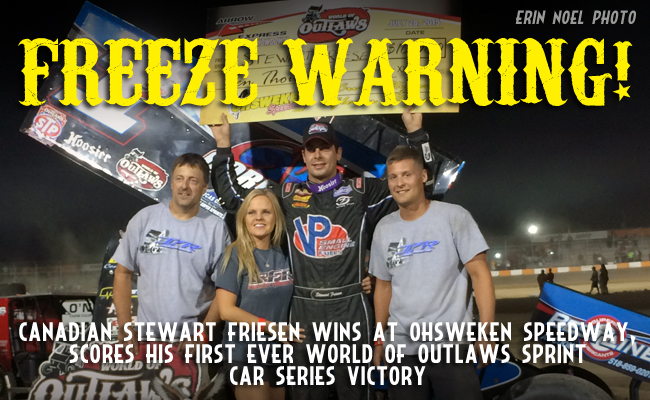 With Ohsweken Speedway win he becomes the first, first-time World of Outlaws Sprint Car Series winner of the season and just second ever Canadian to win a series event

He also became just the second ever Canadian to win a World of Outlaws feature.

“It’s unreal,” Friesen said in victory lane. “What a great race team. This track just came right to us. Jessica did 100 percent, all the right calls. We had the Dash to play with a little bit and adjusted it from there. Wow, it’s unreal!”

Friesen, who is perhaps best known for success in a modified, including three Syracuse 200 wins, came into the night subbing for his wife, fellow race car driver Jessica Zemken, who is expecting the couple’s first child. Zemken also happens to be the car owner.

“She had a lot of good notes that we went off of. Just kind of worked and worked. The 410 deal is just so much different than the 360 with the weight and we just tried to adjust to keep it balanced,” said Friesen, who has found recent success, including wins, in a 360 sprint car. “This JZR race team is awesome! I’m just thrilled, I can’t be more proud of her right now.”

The Niagara-On-The-Lake, Ontario-native, in just his fourth ever Outlaws start, took the initial green flag in the No. 1Z Corr-Pak Merchandising car in the seventh position. Brad Sweet and Schatz started on the front row, with Schatz taking an early lead.

A yellow flew on lap nine, just as Schatz began working his way through traffic, provided a big opportunity for Schuchart and Friesen. On the restart, both drivers bobbed and weaved through cars into turn one, as Friesen tried to take over the third spot from Schuchart. Schuchart held him off and then overtook Sweet. Just a couple of laps later, Schuchart ran down Schatz and got around him on the front straight just after the two completed lap 11.

Schatz held on to second in his No. 15 Bad Boy Buggies car for two more laps before Friesen got around for the second position. As traffic remained in play, the battle between Schuchart, Friesen and Schatz was tight. Friesen worked to hold off an advancing Schatz as Schuchart tried to get breathing room. Lap after lap, the battle continued.

With the middle lane at his disposal on the dry slick track, Friesen was a force. Using the traffic to his advantage he got to turn one ahead of Schuchart on lap 22 and then held off the Shark Racing driver as he tried to slide Friesen through the corner. Schatz took advantage of the situation and followed Friesen through, taking back second on the next lap.

As the battle up front continued, Price-Miller, who won the 360 feature the night before at Ohsweken, was making steady progress in his No. 67 Townline Variety car from an eighth place starting position. He took over sixth on lap nine and fourth on lap 12. As Schuchart fell back, Price-Miller was in position, getting around the No. 1S for third with just six laps to go.

Through one more restart, Friesen held off Schatz and took the win. He joins Tim Gee as the only other Canadian to win a World of Outlaws Sprint Car Series feature.

“I really didn’t want to see that last caution but I was just glad there were no sliders,” Friesen said.
“It was just a clean last lap there. I’m so thankful, just thankful to be there.”

A disappointed Schatz, who won the last Outlaws event at Lebanon Valley Speedway, said despite adjustments his team just can’t get the car to do what they want.

“So, I don’t know if I’ve plugged it into somebody and we’ve bent something that we can’t find or what. It’s still decent, it felt pretty decent but we just need to be better,” Schatz said. “(Friesen) was able to run through the middle like you need to here at Ohsweken. We couldn’t really do it there until the end and I had to be right on the bottom to do it. That’s the way it goes – some nights you win, some nights you lose. It seems like we’ve had a lot of loss here lately.”

Schatz, with 21 wins so far this season and a 366 point lead over Shane Stewart in the race for the 2015 series championship, has finished first or second in 18 consecutive full points Outlaws races and 20 of the last 21.

For the 17-year-old Price-Miller, the weekend was a reminder to everyone that he is one of the sport’s fastest rising stars. After a stellar first night that saw him edge Glenn Styres for a win, Price-Miller said he was really happy to have another good run against the Outlaws.

“They’re the best of the best,” Price-Miller said of his World of Outlaws competitors. “I’m just glad I’m able to race with them, let alone do good. Still a great weekend at Ohsweken. This track – I’m not used to the slick like this. I’ve never been good but Sam Hafertepe and Daryl (Turford), I can’t thank them enough, they had me dialed in and I just drove the thing. Overall a good weekend.”

The World of Outlaws Sprint Car Series continues its three race swing through Canada with a stop at Brockville Ontario Speedway on Friday. It is the first time the series has raced at the track since 2011. To find out more information and to learn how to buy tickets, visit http://woosprint.com/brockville-ontario-speedway.

RACE NOTES: Stewart Friesen won his first ever World of Outlaws Sprint Car Series victory tonight. He is the first, first-time winner of the 2015 season… Stewart Friesen is just the second Canadian-born driver to win a World of Outlaws event. Tim Gee stood in victory lane at Paragon Speedway on July 13, 1983… Kerry Madsen was the quick qualifier of the night, after a lap of 13.810. It is the seventh quick time award of the season for Madsen… Jason Johnson was the night’s KSE Racing Hard Charger, advancing 10 positions to finish eighth.