FORMAT FORMULA: Aaron Reutzel Tops ‘The One and Only’ Points After Night One 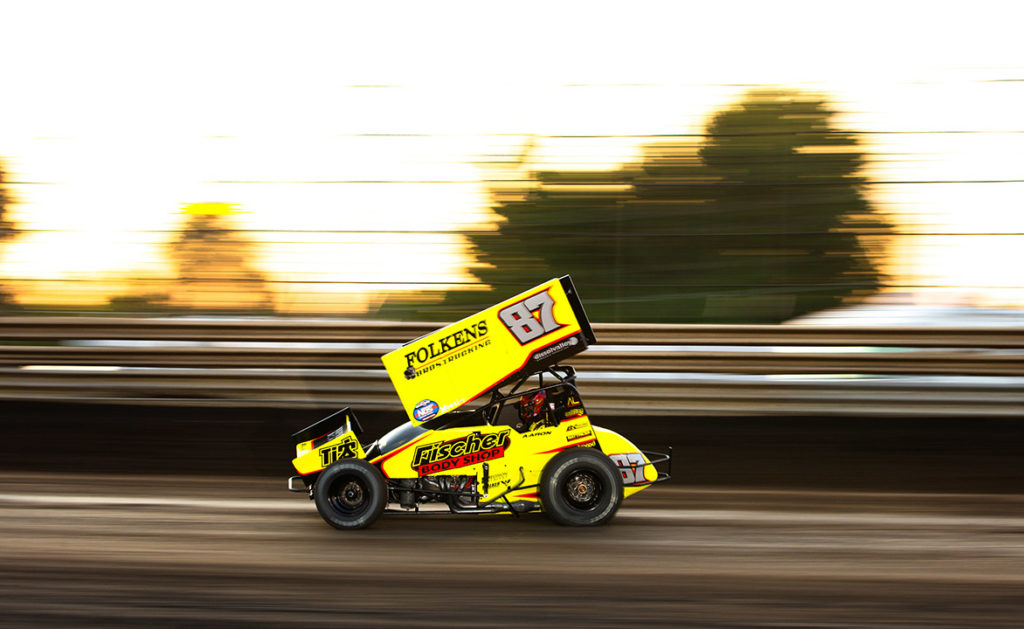 Aaron Reutzel has had a handle on the Knoxville Nationals format for the past two years to put himself in position to win the big race. This week, he’s in position to do the same with “The One and Only” at Knoxville Raceway.

The two-time and defending All Star Circuit of Champions title holder, of Clute, TX, has taken the early points lead for the three-day event, which concludes with the $50,000-to-win Capitani Classic presented by Great Southern Bank on Saturday.

During the opening night of “The One and Only,” he qualified fifth, finished third in his Drydene Heat Race and then third in the Feature, giving him 430 points for the first night. Logan Schuchart and Kyle Larson – who won the first night – are tied for second with 421 points and Brian Brown is fourth with 417 points. If those four can maintain their rank after Friday night’s race, they’ll be locked into Saturday’s DIRTVision Fast Pass Dash.

“You’ve got to qualify good. That’s the biggest part,” Reutzel said. “Fortunately, we do have a good qualifying package here. Then you have to get through your Heat Race. To get through your Heat, you have to be light left. You have to be able to move around the racetrack and that’s something the last two years we’ve had, where you start eighth you’ve got to go on the start and be able to move around. Tonight, I felt like we were even better than we were during Nationals time. We’re always learning.”

He started fifth and finished fourth at the Nationals in 2018. Then, last year, he claimed the pole position but faded to fifth.

After Thursday night’s race, the ghost of another missed win at Knoxville haunted him. His head hung low as he leaned on the left front tire of his #87 machine, watching his crew work on the car. He started second in the 25-lap Feature and contended for the lead early, but fell to fourth before getting a late race head of steam to end the night third.

“I feel like we keep getting better and better every time we come here,” said Reutzel, who has two wins at Knoxville this year. “If I don’t screw up that restart, I may take the lead before Kyle (Larson) gets to us and run away, I don’t know. I definitely made some really bad mistakes as a driver and put myself in a bad situation where I couldn’t contend for the win.”

Reutzel said he and his Baughman-Reutzel Motorsports team continue to learn every time they compete at Knoxville and believe they’ve entered “The One and Only” with a better package than they had at the Nationals last year.

However, breaking through and getting the big win this year won’t be any easier. The three drivers behind him in points at the moment have also been three of the best performing drivers at the historic half-mile this year. Larson’s last four visits to the track have ended in Victory Lane. Schuchart has three podium finishes in his last four races at the track. And Brown, the defending track champion, has three wins at the track this year, as well.

“It’s a good points night overall,” Schuchart said Thursday night. “We’ll see what happens [Friday]. Those Heat Races are tough. You qualify good, you’re starting in the back of those Heat Races. Makes it tough to get up here. This Drydene Performance race car is fast.”

Friday night’s program will utilize the same format used on Thursday. Points will be awarded for Qualifying, Heat Races and Features – D-Main, C-Main, Last Chance Showdown and the Feature.

You can get tickets to Friday night’s event by clicking here. Saturday tickets are sold out, so don’t miss your chance to see this historic event.

Check out how the points stacked up after night one of #TheOneAndOnly at @KnoxvilleRaces! pic.twitter.com/pQN2Yqn9jJ