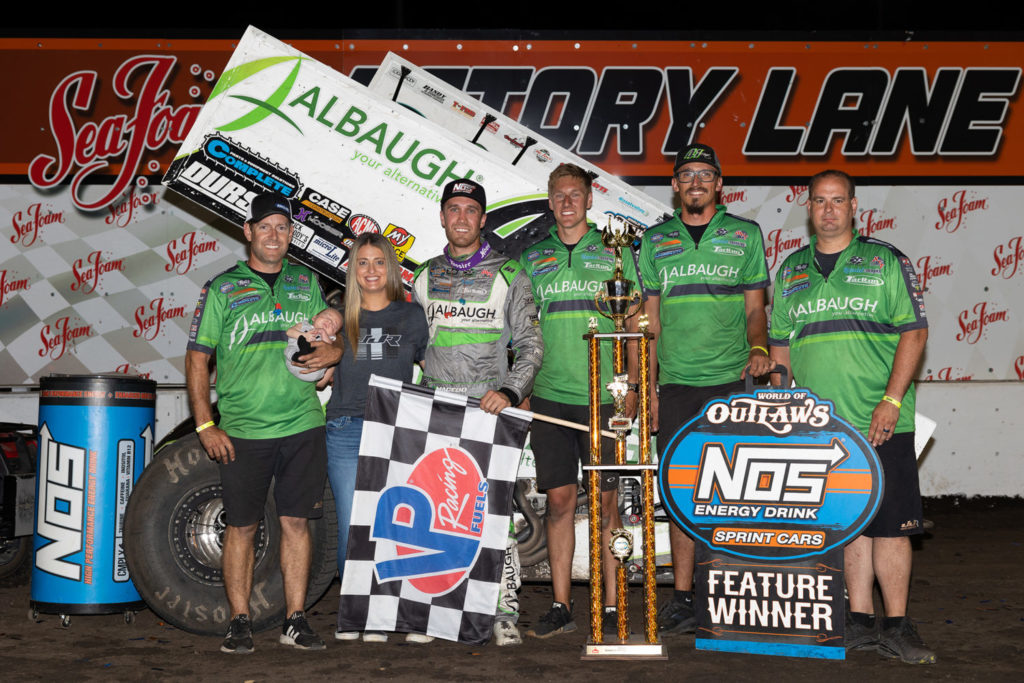 Exactly four years to the day of Jason Johnson’s passing, Carson Macedo brought the famed #41 back to victory lane.

With some help from above, the Lemoore, CA superstar used a little late-race magic to steal the lead away from Brian Brown on Lap 33 of 35 with $20,000 on the line in Friday’s Feature at Huset’s Speedway. His win tallied enough points to lock-in for Saturday’s $100,000-to-win High Bank Nationals finale along with David Gravel, Buddy Kofoid, and Brock Zearfoss.

It was a symbolic win in many fashions for the Albaugh #41 team. Friday marked the first-ever trip to victory lane for Jace Dietz, the newborn son of owners Philip & Brooke Dietz, who ironically enough was originally due on June 24 of all dates. With Jace in arms, a little bit of Jason was taken to the winner’s circle.

As championship leader Brad Sweet suffered more carnage, Macedo made the most of his opportunity and cut the championship lead down to a mere 12 points with his sixth World of Outlaws NOS Energy Drink Sprint Car Series win of the 2022 season.

More importantly, he’s put himself and the JJR squad in a prime position to contend for $100,000 on Saturday night at the state-of-the-art Brandon, SD facility. It’s the first of four six-figure paydays for The Greatest Show on Dirt this summer and would top the National Open ($75,000) as the richest win of Macedo’s career at 26 years old.

“I think I had a co-pilot in there tonight,” Macedo said. “Winning today on June 24th, four years after we lost Jason, is pretty special. He was an incredible man, built an incredible team, and I’m privileged to continue honoring his legacy with these guys. From Craig & Deborah and Bobbi & Jaxx to now Philip & Brooke, carrying on this legacy means a lot to all of us.”

Winning it from the fifth spot, Macedo was far from the story early on in Friday’s 35-lapper.

Knoxville, IA native Riley Goodno, in his seventh-career World of Outlaws start, earned the pole position in his family-owned #22. The 19-year-old quickly detered any “fluke” narratives as he beat Brian Brown on the opening lap and ensued to lead the first eight circuits while only building his advantage over the best Sprint Car drivers in the world.

Goodno’s pace was erased when Brad Sweet & Rico Abreu brought out the red flag on Lap 8, and created a double-file restart. This time, Brown wasn’t messing around and throttled around the top to put the Casey’s General Stores, FVP Parts #21 in command of the race lead on Lap 9.

Brownie, of Higginsville, MO, controlled the top spot for another 24 laps until Macedo tossed a big move his way and made it stick to steal the lead with three laps left.

“Once I got behind Brown, I was hustling extremely hard, probably too hard,” Macedo contained. “I finally calmed myself down and set up that big slider on him in turns one and two. I know it was a big flyer to throw, but this is for a lot of money this week so I had to try it. It feels good to just finally get a win at Huset’s after this place had my number for so long.”

.Blackjack Brian Brown completed a miraculous turnaround with a runner-up finish for the #21, finishing 1.046-seconds behind Macedo. In only 24 hours, the Knoxville Raceway ace took his 1/4-mile program from struggling into the Last Chance Showdown to competing for the $20,000 victory.

“A lot of the credit goes to Danny [Lasoski] tonight,” Brown said on his comeback. “He made a ton of big changes to this car from last night, and I just let him do his thing and kept my nose out of it. It’s no secret this is a place that has always had my numbers over the years. We were 16th in the LCS last night, I mean terrible honestly, and tonight we almost won it. We’ve got a lot work left to do tomorrow, though.”

Rounding out the podium was the feel-good story of the night with Riley Goodno claimining a career-best third-place finish with the World of Outlaws NOS Energy Drink Sprint Car Series. It was a drastic improvement for the 19-year-old, who entered Friday with a career-best of 18th in six starts with the Series.

“This is a dream come true,” Goodno said on the frontstretch. “I can’t thank my mom and my dad enough for everything they’ve done for me. Driving me up and down the road allowing me to chase my dreams is something I appreciate so much. My dad and I have always wanted to travel as much as possible, learn as much as possible, and be the best team that we could be, I think that is starting to show.”

Closing out the top-five at Huset’s was Spencer Bayston in fourth-from-11th aboard the CJB Motorsports, TrueTimber #5, and David Gravel in fifth in the Big Game Motorsports #2. The Watertown, CT native collected 852 total points across the two preliminary nights (6th Thursday, 5th Friday) to earn high point man honors and guarantee himself a front row start in the $100,000-to-win Feature on Saturday.

Carson Macedo’s 23rd career World of Outlaws NOS Energy Drink Sprint Car Series victory brings him one away from Ron Shuman (24) for 27th on the All-Time Win List. In his eighth start at the track, Friday marked Macedo’s first-career win at Huset’s Speedway, the 17th different track he’s won a World of Outlaws race at.

For the third consecutive night, a driver earned his first-career World of Outlaws podium finish. It was Kasey Kahne (3rd) on Wednesday after leading lap, then Buddy Kofoid (1st) winning for the first time on Thursday, and now Riley Goodno (3rd) leading laps and finding the frontstretch on Friday.

David Gravel, Carson Macedo, Buddy Kofoid, and Brock Zearfoss are locked-in for Saturday’s King of the Hill, already guaranteeing a top-five starting spot for each of them in tomorrow’s $100,000-to-win High Bank Nationals finale.

The likes of James McFadden, Logan Schuchart, Giovanni Scelzi, and Hunter Schuerenberg are expected to lead Saturday’s four Qualifiers to the green flag with each winner earning a spot in the King of the Hill alongside the locked-in drivers.

For the second consecutive night, Sheldon Haudenschild earned the KSE Hard Charger Award, his Series-best sixth of the season. This one came with a monumental 25th-t0-7th run, the largest of the season at +18 positions after he needed to take a provisional.

UP NEXT (Thur-Sat) – The World of Outlaws NOS Energy Drink Sprint Car Series will conclude the inaugural High Bank Nationals on Saturday with a $100,000-to-win finale awaiting racers at Huset’s Speedway in Brandon, SD. Fans can BUY TICKETS HERE, or watch every lap LIVE on DIRTVision.