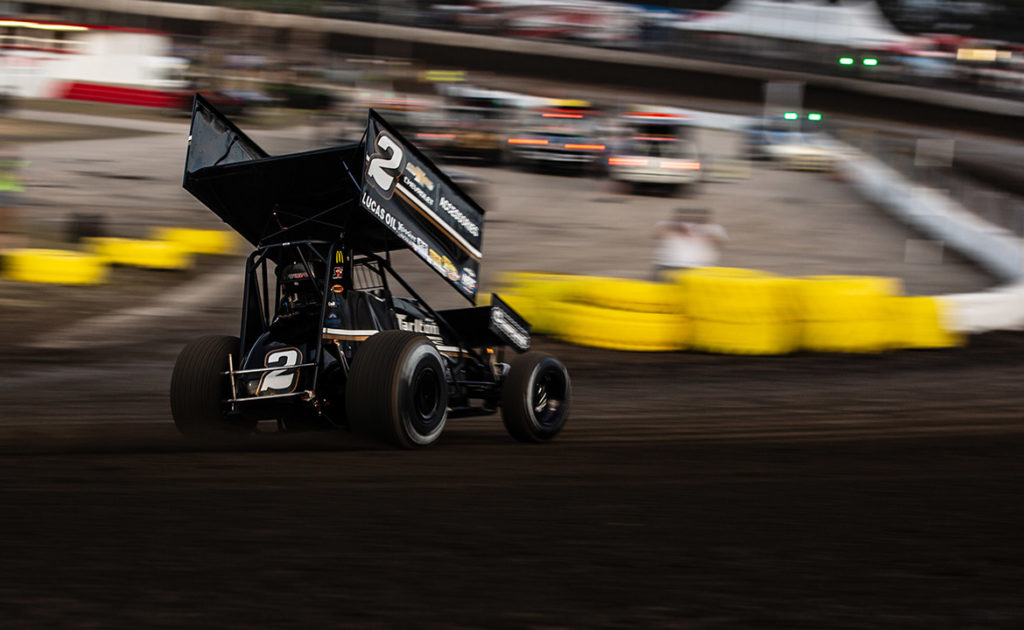 Carson Macedo isn’t the driver he was this time last year.

A full year with the World of Outlaws NOS Energy Drink Sprint Car Series will do that to you.

The Lemoore, CA driver is wiser. He’s experienced. He knows what it takes to be a full-time Outlaw.

“Racing with the World of Outlaws is just a totally different level,” Macedo said. “A lot of people don’t realize how big of a jump it is to race with these guys full-time. It definitely was an eye opener.

“Anyone who thinks they’re ready is not realistic, I think. But the only way to go out and be ready is to go and start doing it and start getting beat. Myself, I feel like it’s made me, just in a year racing with those guys full-time, made me more aware. I feel like I’m, I’d like to think, a better race car driver. That’s what it was really all about.”

In his rookie year, last season, driving for Kyle Larson Racing, Macedo finished sixth in the Series’ points, won four races and earned the World of Outlaws Kevin Gobrecht Rookie of the Year award. He was the sole driver contending for the award, but in the last 30 years of the sport only reigning champion Brad Sweet’s rookie season in 2014 is comparable to Macedo’s.

Sweet and Macedo are currently the only two rookie contenders in that time period to have won more than two races in their first full-time season – Sweet won five races and also finished sixth in points.

Macedo views 2019 as a successful year for he and his KLR team. A year they can build off of. There weren’t many surprises, either. He ran well when he expected to and struggled just the same.

They put together an impressive run in the first 14 races of the season. Macedo earned his second career Series win at Silver Dollar Speedway and only finished outside the top-10 twice. Then came the three-race Pennsylvania swing. He used a provisional to start the race at Lincoln Speedway and finished 19th and then finished 20th and 23rd, respectively, at Williams Grove Speedway.

“I think I let that get to me,” Macedo said about his poor performance in Pennsylvania. “I think I let it bother me and got my confidence down. So, I struggled for a couple of weeks after that.”

Mental toughness is one of the most challenging elements of racing with the World of Outlaws, Macedo admitted.

For drivers that race weekly at one track and with the World of Outlaws on occasion, Macedo said it can be easier for them to bounce back from a few bad races with the Outlaws. They can return to their home track where they have a lot of laps and success.

“The difference with racing with the Outlaws is when you go to those racetracks that you struggle at or maybe aren’t your strong suit, all those things, you can’t get away,” Macedo said. “You’re going to race Donny (Schatz) and Brad (Sweet) and David (Gravel) and Daryn (Pittman) and Logan (Schuchart). They’re all going to be there. And they’re all still going to be fast. It just forces you to deal with adversity and be the best you can be at the place that maybe you’re not the best at.”

“He’s been really good for me,” Macedo said about working with Hamel. “He takes time to talk to me. He’s not a life motivator. I don’t go to him because I have problems. It’s just more about trying to get my head right and getting myself in the right frame of mind. Do what other people in the past have done. Build team chemistry and all of that stuff.”

He broke into the top-10 once at Williams Grove in July. The best he could do otherwise was a 13th-place run in October at the half-mile track. However, Macedo said the best thing a person can do is fail. And then learn from those failures.

He did just that this month by winning the season opening race at Williams Grove. It was a feeling like no other, Macedo said. He now considers it one of the biggest wins of his career, because he had failed there so many times.

There are many others he attributes to helping him with his career, such as his parents, Tommy Tarlton, who he’s raced for several times, and two-time World of Outlaws Sprint Car champion Jason Meyers.

“I talk to [Meyers] a lot,” Macedo said. “He’s actually the one that got me hooked up with Tim Hamel. He’s been very good for me, because it’s always nice to talk to someone who’s walked a day in your shoes and experienced the same things.”

When it comes to the drivers he races against on a weekly basis, there’s not much support shared amongst the group. And there’s nothing wrong with that, he said.

“That’s one thing I’ve learned pretty quickly with the Outlaws, is that nobody helps anyone,” he said with a chuckle. “I mean, everybody is doing it for a living. You know, you want to beat the guy next to you. At the end of the day, if you win races and beat the guy next to you, you’re putting more money in your pocket. Your team is happier. Your job security is there. It’s all about beating each other guy.”

One of Macedo’s biggest attributes that have changed after a year with the Outlaws is his driving style. His go-to move would’ve normally been to throttle his way around the top all race if there was a big cushion. Now, after watching Sweet and 10-time Series champion Donny Schatz for a year, he’s altered his approach. Just a little.

He’s watched how Sweet and Schatz slow their cars in the corner for better control and how they’re able the run where other drivers aren’t.

“I’ve been trying to work on that,” Macedo said. “Try to be more versatile. Not just that guy that goes straight to the top and hit the cushion for 30 laps. I still want to be that guy, because at the end of the day, in racing, I feel like you need to be able to stand up in the seat and drive harder than the guy next to you. But at the same time, we race on tracks that are so technical so often, you have to be good at both to win a championship.”

Macedo has already earned one top-five and three top-10 finishes in the first three races of the 2020 season and currently sits fifth in points.

While he may be a different driver this year, Macedo’s goals remain the same. He wants to win.

He even shares the same sentiment you’ll get from any full-time Outlaw by saying, “I feel like if you worry about winning races, the rest will come.”

A full year with the World of Outlaws will do that to you.

The World of Outlaws will continue to bring race fans new and engaging content throughout the postponement period. You can keep up to date with everything the Series has going on through Twitter, Facebook and Instagram.