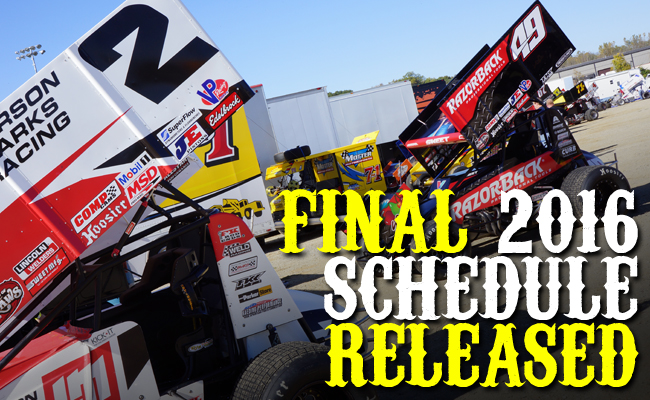 Schedule is set as teams gear up for DIRTcar Nationals

CONCORD, N.C. – Jan. 27, 2016 – The final dates for the 2016 World of Outlaws Sprint Car Series season have been set as the series gears up to kick off during DIRTcar Nationals at Volusia Speedway Park in two weeks.

In all, the 2016 season will feature 91 races at 54 different tracks in 25 states and one Canadian province. Four tracks will be making inaugural appearances on the schedule while another 11 return after absences.

For the first time since 2005, the World of Outlaws heads to Colorado as it takes on El Paso County Raceway in Calhan, Colo. on Wednesday, Sept. 14. It is the first time the series has ever taken on the quarter-mile track, 35 miles east of Colorado Springs.

Brown County Speedway in Aberdeen, S.D. returns to the series schedule for the first time since 1985. The Outlaws take on the high-banked, third-mile bullring on Sunday, June 19. The last time the World of Outlaws was at Brown County, Sammy Swindell edged Steve Kinser to take the win.

The 2016 season kicks off on Friday, Feb. 12 at Volusia Speedway Park for DIRTcar Nationals. That is the first of three nights at the half-mile track in Barberville, Fla. The series then heads west to Texas’ Cotton Bowl Speedway and Royal Purple Raceway.

Tickets for many of the announced dates are already on sale and available by calling toll-free 844-DIRT-TIX (347-8849), or by visiting http://www.WorldofOutlaws.com/Tickets.