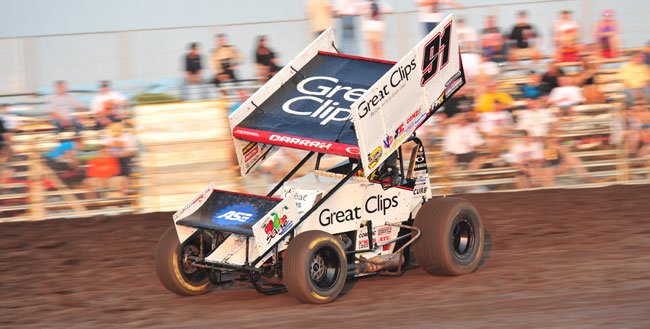 CONCORD, N.C. — September 29, 2011 — With the 2011 World of Outlaws Sprint Car Season winding down, the stars and cars of the ‘Greatest Show on Dirt’ head to hostile territory. Williams Grove Speedway near Mechanicsburg, Pa. is known as one of the home tracks for the Outlaws arch rivals, the Pennsylvania Posse. When these two groups go head to head, excitement erupts from every inch of the race track. $50,000 dollars is on the line along with a spot in next year’s Morgan Cup Challenge race as the Outlaws head into Williams Grove for the annual National Open on Friday, September 30 and Saturday, October 1. (Steve Cox photo.)

World of Outlaws competitors share their thoughts on the big event as “The Greatest Show on Dirt” continues the march to the World Finals at the Dirt Track at Charlotte.

Craig Dollansky, #7 Big Game Treestands Maxim: “It’s certainly a big event for everyone involved and when they bumped up the purse to $50,000, it added even more to it. It’s very competitive there and it’s an event we look forward to each year so hopefully we can have a good run.”

Chad Kemenah, #63 Golden Flavor Sesame Sticks Maxim: “Williams Grove is animal all on it’s own. It seems like we’ve been doing better there as of late. The only problem is that I think I have some sort of a demon up there because every time we seem to be running good, something breaks. Hopefully, we can get over that and have a good qualifying run and a good finish.”

Steve Kinser, #11 Bass Pro Shops/ J.D. Byrider/Chevrolet/ Maxim: “There’s not another track out there that’s like Williams Grove. It’s got real long straightaways and tight corners plus they have a ton of local cars that run really well there. It’s a fight every time you go there and we’ll just have to do our best.”

Kraig Kinser, #6 Caseys General Stores Maxim: “It’s a tough racetrack and tough competition. A lot of those local guys have a ton of experience when it comes to getting around it so you are fighting that. You just have to have everything rolling when you get there and hope you don’t run into any problems.”

Cody Darrah, #91 Great Clips Maxim: “It’s a race that I live for since it’s so close to where I grew up. There’s a lot of hometown fans that will get the chance to come out and watch us race. It energizes you a bit when you get to race near home and National Open means a ton to me. We’ve worked on a pretty good notebook for the track all year so I’m hopeful that we can translate that into some really good finishes while we’re there this time around.”

Jason Meyers, #14 All Star Performance KPC: “It’s been one of the biggest races for quite some time and putting $50,000 on the line only helps that. The guys at Williams Grove do an awesome job of putting on the show up there. The fans are also great up there and Sprint Car racing has a huge following in that area. With our engine builder Charlie Garrett being nearby, it’s even more special. We won there for him in July and we were leading the National Open late last year and I lost it in the closing laps. We’re going back up there to try to get one back that we lost. The neat thing about the track is that it stays relatively the same each time you go there and I think we have a pretty good setup for it.”

Paul McMahan, #83 HR Cattle Maxim: “It’s a great event. It’s the hardest place to go race anywhere in the country because of the track and the local guys. The layout is very unique. It’s a love it or hate it kind of place and I’ve experienced both sides of that in the past. My crew chief (Justin Adams) is from the area so a win would be great for me but huge for him.”

Joey Saldana, #9 Red Bull Maxim: “It’s a really tough race at a really tough track. For me, I’m just trying to have some fun and that’s been the coolest thing for me coming back at Hartford. I don’t have the pressure of a championship run on my shoulders so I can go out and focus just on winning races. It’s going to be the first time in a long time that I’m going into Williams Grove that I just want to learn and get better as opposed to having to worry about other things. We really want to be better for next year. It’s a great race and I certainly want to win it. It’s one of those events that ever Sprint Car driver wants on his resume when he retires. I have won a race at Williams Grove but it’s been a while. It really is a cool place to win and to put Kasey Kahne Racing into Victory Lane there would be huge.”

Donny Schatz, #15 STP/Armor All/Chevrolet J&J: “It’s a crown jewel event in our sport. There’s awesome fans up there, some of the best in the entire country. There’s also quite a rivalry between the local guys and the World of Outlaws so you have the perfect scenario for an event. I’ve always loved that place and I know there a few things that I can do to make up some time here and there if I have to. It’s very competitive and I can’t wait to get there. Paying $50,000 certainly doesn’t hurt it either. It’s one that I’ve won a few times so I’m a little bit partial to it.”

Jason Sides, #7s Wetherington Tractor Service Maxim: “It’s one of those places that we go to where you just hope for a strong qualifying effort to make it into their show. From that point on, it’s all a matter of just getting what you can get there because they have such a strong field of local guys.”

Lucas Wolfe, #5w Allebach Racing Maxim: “It’s one of the biggest events of the year and I look forward to it because it’s right near where I am from. It’s one of those events that helps close out the year as far as big events go. We really look forward and have run very well at the Grove in the past. We had a good weekend there in July so we have great expectations as we head in there.”

• For tickets to the event at Knoxville Raceway, visit www.WilliamsGrove.com