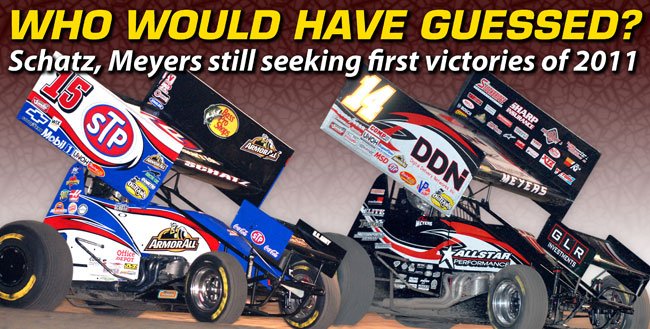 Meyers just missed a victory at the Thunderbowl Raceway in Tulare, Calif., and was on the pole at Giant Chevrolet Kings Speedway before rain forced the event to be postponed. Meyers is the defending Ironman 55 winner so he is no doubt looking forward to returning to I-55 Raceway, just south of St. Louis in Pevely, Mo.

Schatz found his groove in Las Vegas and climbed the standings on the West Coast. Three Top-5 finishes in past four events have steered the Tony Stewart Racing STP/Armor All/Chevy J&J into the thick of the title fight as Schatz chases the 106th victory World of Outlaws of his career.

On top of the championship battle are Joey Saldana and Steve Kinser, who had been leading since the beginning of the season at Volusia Speedway Park. After Calistoga, Saldana edged ahead with a slim four-point lead as he attempts to win his first — and Kasey Kahne Racing’s first — World of Outlaws title.

(Click here for a full recap of the Outlaws Spring Break tour on the latest edition of ‘Outlaws Unleashed,’ the official podcast of the World of Outlaws Sprint Car Series.)

Looking ahead, drivers and teams will invade Paducah (Ky.) International Raceway on April 15; I-55 Raceway April 16 in Pevely, Mo.; the Salina (Okla.) Highbanks on April 23, Tri-State Speedway on April 30 in Haubstadt, Ind.; and Eldora Speedway May 6-7 in Rossburg, Ohio.

World of Outlaws competitors sound off below on these upcoming events as “The Greatest Show on Dirt” begins its long march to the World Finals at The Dirt Track at Charlotte:

Craig Dollansky, #7 Big Game Treestands Maxim: “I always enjoy going to Pevely and Haubstadt because they are just some great tracks. The racing is always close and action-packed and the fans really support things out there. Eldora has been a great place for us in the past so obviously that’s a place you circle on the calendar and the Salina Highbanks should be an interesting trip.

Ben Gregg, #2B Kronik Energy Maxim: “The Salina Highbanks is a track we’ve never visited before so that kind of evens things out for a team like ours. We don’t have to compete with years and years of experience. Aside from that race, I love racing at Pevely and Paducah and most of those place out in the Midwest. The atmosphere is great and the fans always come out in huge numbers. We’re really looking forward to it and want to put up some great finishes.”

Chad Kemenah, #63 Golden Flavor Sesame Sticks Maxim: “California was a lot of fun and we did get to lead some laps at Calistoga but it’ll be really nice to race closer to the shop (Findlay, Ohio) and have some of our friends and family come out. The tracks out in the Midwest are where I learned how to race and are what I have the most experience on so that helps.”

Steve Kinser, #11 Bass Pro Shops/J.D. Byrider/Chevrolet/ Maxim: “They are all pretty close to home so that’s obviously very nice. I’m normally a fan of the larger tracks so getting back to places like Eldora is pretty good for our entire Bass Pro Shops team. We just want to pick up some good momentum going into these summer months because that’s when we need to be strong.”

Cody Darrah, #91 Great Clips Maxim: “We’re very excited about these tracks. Paducah and Pevely are a few of the tracks I really got to watch last year when I was injured so I kind of know what to expect. Pevely is probably one of the nicest tracks that I’ve seen and it always puts on a good show anytime the Outlaws race there. Haubstadt will be a challenge for me. It seems like it’ll be a lot what we saw at Chico (Silver Dollar Speedway) so it’s just an opportunity for us to grow and learn together as a team.”

Jason Meyers, #14 Allstar Performance KPC: “Part of us doesn’t want to leave home but part of us does since it’s really busy being around home in California. It allows us to focus a little more on the racing which is always good. We’ve had some success in the past at Pevely and always look forward to going there. The Salina Highbanks will be a new adventure so we’ll see what we can do with it and then we set our sights on places like Eldora. We used to run very well there and have kind of trailed off in recent years. We spent a lot of time in the off-season working on our half-mile program so we’re anxious to see if all that hard work will result in some wins on those bigger tracks.”

Joey Saldana, #9 Red Bull Maxim: “They are all great tracks to run. I was coming off a shattered hand last year when we went to Paducah and Pevely and picked up a first and second so that makes me feel even better coming in this year fully healed. Haubstadt is a track I raced on a lot and we’ve been close there several times. It’s a great little track but it’s also Steve Kinser’s backyard so we’ll have to fight for it. Pretty much all of the tracks coming up here are great to run on and it’s an opportunity for us to learn a lot as we really get the schedule rolling coming into the summer months.”

Donny Schatz, #15 STP/Armor All/Chevrolet J&J: “Paducah and Pevely are a good sign for our Tony Stewart Racing team because that means we’re heading back to some good weather and great racing. Pevely is always fun to run because it’s a high-banked, quarter-mile that always seems to produce some great racing. Paducah is also a great show to be a part of. Overall, we are really looking forward to getting to race a little closer to home and really go after this fifth championship.

Jason Sides, #7s Wetherington Tractor Service Maxim: “All of these tracks are really good and they are very well maintained. I was at the Salina Highbanks about 10 years ago for a few shows and remember the track being very racy and very high-banked so I’m sure we’ll put a good show on there. Overall, our team is really looking forward to getting back to closer to home and some of these tracks that we’ve had success on before like Eldora.”

Lucas Wolfe, #5w Allebach Racing Maxim: “It’s good to be back to heading to the Midwest. It’s where the heart of our schedule is. We came really close to winning a race last year at I-55 so we’re looking forward to running there again, as well as places like Paducah and Haubstadt. I’ve heard nothing but good things about the Salina Highbanks so we should be able to put on a good show for all the fans out there and hopefully build some momentum for this #5w team.”

• For tickets to the event at Paducah International Raceway, click here to visit the track’s Web site, or call 270-898-7469

WHERE ARE THEY NOW: DIRTcar Nationals Champions Reminisce on Big Gator Trophies

Checkered Past: Sunshine State of Mind