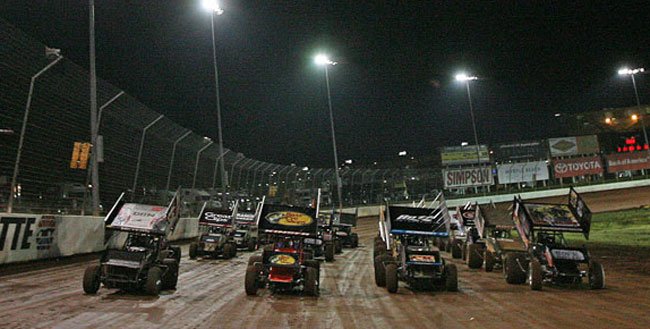 Fast Talkers: Outlaws Open Up about The Dirt Track at Charlotte

It’s the first live TV event of the season, beginning Friday at 8 p.m. (EST) on SPEED

CONCORD, N.C. — May 22, 2012 — A unique spotlight will be placed on the World of Outlaws Sprint Car Series Friday as the series rolls into The Dirt Track at Charlotte.

For the first time this season, the Outlaws will be broadcast live on SPEED for the race at the 4/10-mile oval. The event is set to begin airing at 8 p.m. (EST).

Here are some thoughts about being on television and competing at the track from the full-time World of Outlaws drivers:

Cody Darrah (Red Lion, Pa.) – “It’s an awesome opportunity to showcase our crew and our team and sprint car racing in general. There’s not too many times we get to be on TV and I’m glad (it’s) able to support our sport and to really give America a chance to see what it’s like to slide around on a dirt corner.”

Chad Kemenah (Findlay, Ohio) – “It seems like a lot of times when we have TV some of us have good luck, some of us have bad luck. And I seem to be at the latter part of that, so hopefully we can go down there for television and have a good show.”

Kraig Kinser (Bloomington, Ind.) – “It’s a lot of energy. You definitely want to run good there, especially with the Hendrickcars.com right there in their backyard.”

Kerry Madsen (St. Marys, New South Wales, Australia) – “Being on TV, you really want to do well for your team, sponsors, team owners, for everyone involved in your program. It’s really important to have a good run on TV. It just does a lot for you.”

Bill Rose (Plainfield, Ind.) – “It’s actually a really big deal. To get some television experience maybe we can bring a sponsor to the team because we could definitely use that. All the big names live in Charlotte, so a lot of the Cup guys will be there.”

Joey Saldana (Brownsburg, Ind.) – “I think it’s big for sprint car racing. Our form of racing is really hard to show people what we do. It’s one of those deals kind of like hockey; you need to see it to appreciate it.”

Donny Schatz (Minot, N.D.) – “You race to win whether it’s TV or no TV. When you’re there racing you don’t know the cameras are there.”

Sammy Swindell (Germantown, Tenn.) – “It’s a big plus, not so much for me other than just getting your name out there in front of the TV, but it’s probably a bigger deal for all our sponsors and our associates.”

Lucas Wolfe (Mechanicsburg, Pa.) – “It’s good to be on TV. It gives everybody a chance that’s unable to make it to the race a chance to catch up with what’s going on and see it, and it’s something that we need to be able to do more. We always look forward to those opportunities.”

Tickets can be ordered online by clicking CharlotteMotorSpeedway.com/dirt/tickets or by calling 800-455-3267.