Familiar Ground: Johnson Looks to I-30 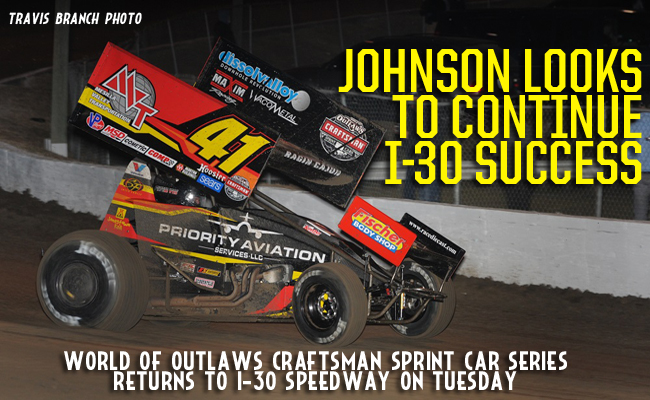 Familiar Ground: Jason Johnson looks to add to success at I-30 Speedway

LITTLE ROCK, Ark. — April 22, 2016 — Jason Johnson has probably turned more laps at I-30 Speedway in Little Rock, Ark., than any other full-time World of Outlaws Craftsman Sprint Car Series competitor. With around 30 starts at the quarter-mile under his belt, along with five career wins, including the Short Track Nationals in 2006, Johnson has had the event on Tuesday, April 26 circled on his calendar since the schedule came out in the winter.

While his stats at the track would probably make him the favorite on paper, Johnson is quick to point out that gaining an upper hand on any World of Outlaws Craftsman Sprint Car Series competitors is nearly impossible.

“I would like to think we have an advantage, but the Outlaws are the toughest in the industry,” said Johnson, who drives the Priority Aviation/Mesilla Valley Transportation No. 41. “There is no doubt those guys will find the right place to be on the track pretty quick.”

One plus for Johnson is that he has raced at I-30 Speedway under a variety of track conditions. While the cars and set-ups continue to evolve and change, he and his team have solid notes from the past to use as a baseline starting point.

“I’ve been there when it’s been really fast around the bottom and you have to have a lot of patience to run around the tractor tires,” he explained. “I’ve also been there when you’ve had to be really brave and run off the top edge of the race track and let it all hang out. That’s a lot of fun as well. We’ll have to see when we get there what the track is like. I think they’ve been getting a lot of rain in the last few weeks. When there is a lot of moisture in the track at the beginning of the season it’s really racy and definitely going to be a great show.”

Johnson and his fellow World of Outlaws Sprint Car Series competitors recently wrapped up a six-week tour of California, which is traditionally known for small, bullrings that are similar to the quarter-mile configuration of I-30 Speedway. Johnson and his team had had a solid set-up on the smaller tracks this year, having finished seventh or better in all five short track (quarter-mile and third-mile) races thus far in 2016.

“Kyle Hirst (from California) came east to race several years ago and he said that Little Rock (I-30 Speedway) was very similar to a place called Placerville (Speedway in California),” noted Johnson. “Obviously we had a really good package at Placerville. If we can start off with something similar to the small track package we used out west, hopefully we can continue that success as we head back across the country. If we can keep the momentum going that we had on the West Coast, I think we’ll be just fine.”

Johnson won at Placerville Speedway on March 23, leading 27 laps, after taking the top spot from local driver Andy Forsberg. The win, which was his second-career World of Outlaws Craftsman Sprint Car Series A-Feature triumph and first since 2003, was an emotional one for Johnson, as last year he suffered a broken back at Placerville, which kept him out of the seat for nearly three months. While he was out of the seat, Johnson had two-time series champion Jason Meyers, as well as three-time Outlaws title winner Sammy Swindell and Australian Jamie Veal, fill in for him.

“We really didn’t have any expectations going back to Placerville this year,” he explained. “We just wanted to walk out of there at the end of the night this year. To walk out with the trophy, and a really cool trophy at that, meant a whole lot. That is a testament to this entire race team. A lot of that came from the different drivers we worked with last year and putting all of our heads together over the winter to come up with a solution to better our program. So far, it seems to be paying off this year.”

“We are the best prepared we have ever been as a team, said Johnson, who owns his team along with his wife, Bobbi. “We are surrounded by great people. We have great supporters that want to see us excel, but yet they have a level of patience, because they know how tough the series we are running in is.

“Everyone wants us to do well and give it our best each and every night. We are probably harder on ourselves than we should be, but we have high expectations and we are meeting many of those at the moment and want to continue that.”

The last time that Johnson raced at I-30 Speedway was in the 2014 edition of the Short Track Nationals. This season with the World of Outlaws Craftsman Sprint Car Series, Johnson has 13 top-10 finishes, with five of those being top-five performances, including his win. He is currently sixth in points. Johnson has been fastest in time trials twice so far in 2016 and also had picked up three Hard Charger awards for passing the most cars in the feature. The native of Eunice, Louisiana looks to keep that momentum going at I-30 Speedway.

“We have a lot of fans in the Little Rock area, since we have raced there a lot over the last number of years, along with winning the Short Track Nationals,” said Johnson. “To go back there and have a successful night and end up in victory lane like we did at Placerville would be the ultimate goal. I think if we can stay consistent, stay in the hunt and be in the top-five and keep the good runs going we’ll find victory lane throughout the season.”

Tickets for the World of Outlaws Craftsman Sprint Car Series return to I-30 Speedway in Little Rock, Arkansas on Tuesday, April 26 and can be purchased online at slspromotions.ticketforce.com or by calling SLS Promotions at 815-344-2023.

The rain date for the event, if needed, if Wednesday, April 27.