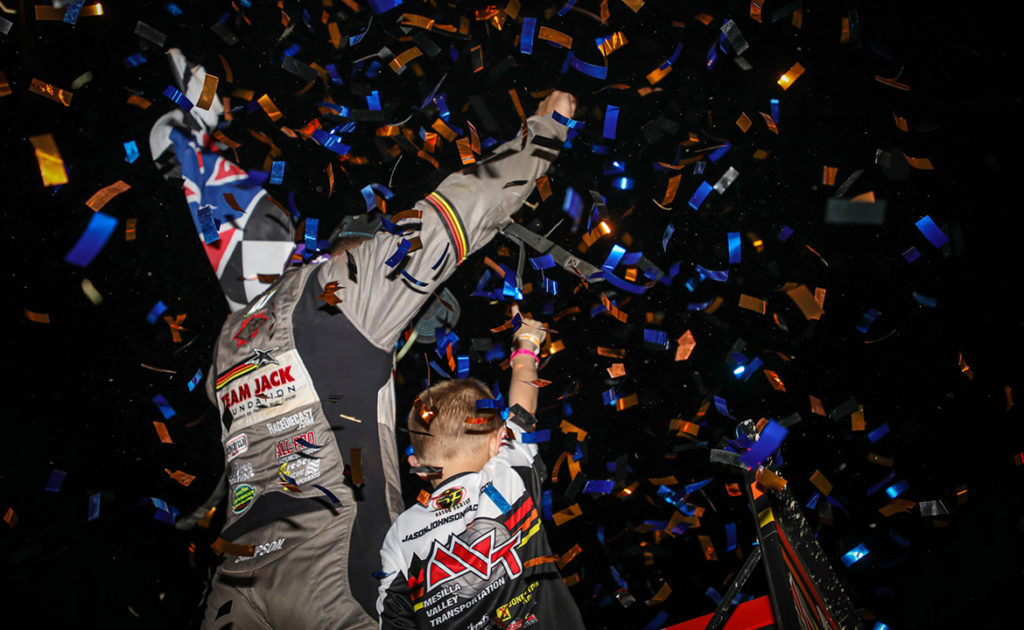 Repeated speeches about strong podium runs and satisfying runner-up finishes became commonplace for David Gravel the past two months. A fourth win of the year was in his grasp on several occasions but lost in the closing stage of the race.

The same story was playing out again in the final three laps of the World of Outlaws NOS Energy Drink Sprint Car Series Feature at Hartford Speedway Friday night. But behind the façade of being content with another podium was the raging fire to win again.

“You never want to finish second. You want to win these races,” Gravel said.

On the final restart of the race, with three laps to go, Gravel let the fire loose. He had worked too hard to put himself in a winning position and lose it again.

Gravel won his Drydene Heat race and finished second in the DIRTVision Fast Pass Dash – putting him on the front row for the 30-lap Feature. He had an advantage over the entire field, too – he’s the only driver to have won on the track’s 3/8-mile configuration.

On the initial start Gravel lost second-place to 10-time Series champion Donny Schatz, who snuck under Watertown, Conn.-native in turn one and cleared him down the back stretch. However, the red flag came out before a lap was completed.

Several cars were involved in an accident on the back stretch, including Series points leader Brad Sweet. The lengthy red flag period – to tow three cars off the track – allowed Sweet’s Kasey Kahne Racing team, along with team members from several other teams, to get the NAPA Auto Parts No. 49 car fixed and back on track before the race went green again.

Since a lap was not complete, drivers lined back up in their initial starting order, putting Gravel back in second-place. This time, his lesson was learned. When the green flag flew again Gravel dove to the bottom of turn one, blocking any attempt by Schatz for another pass. It also allowed him to get a run underneath leader Carson Macedo down the back stretch and into turn three.

Gravel had his nose in front of Macedo exiting turn four, but Macedo had the better run off the corner and charged back to the lead down the front stretch.

From there, Macedo held command of the lead for the next seven laps before the caution flew again for a slowed Bill Balog. When the race restarted, Gravel, again, put pressure on Macedo. Inches were left between their bumper for the next two laps. Gravel dived underneath the rookie in turn three but like before Macedo prevailed.

They stayed first and second, respectively, to the halfway point of the Feature. In that time, Logan Schuchart quietly worked his way from ninth to third with the top two in sight.

With 14 laps to go, Gravel, not willing to settle for second, capitalized on a strong run. While Macedo searched for traction on the high side, Gravel had already found it on the bottom. He powered by Macedo and officially took the lead with 13 laps to go.

“Carson had a good pace. I think he just got free halfway through,” Gravel said. “I just kept working him, working him, trying to keep the pressure up, hoping he would spin his tires and kind of wear his stuff out. Luckily we were able to get by him.”

Gravel’s fortunes looked to have finally turned in his favor. Instead of losing the race in the second half of the event, he was on track to win it. However, with nine laps to go, the “dun dun” of an imaginary bass played in your head. The Shark Racing No. 1s of Logan Schuchart was closing. Fast.

Cruising around the high side of the track, Schuchart caught Gravel with four laps to go and sped around him with ease through turns one and two. Before Schuchart could run away with his fifth win of the season, the caution came out again for Tim Kaeding coming to a stop in turn four.

With three laps to go and Schuchart now backed up to Gravel, the Jason Johnson Racing driver had one last chance to harness his fire to win.

Gravel timed the restart just right, sneaking a nose underneath Schuchart as they raced down the front stretch. On their charge into turn one, Gravel dove to the bottom leaving no time for Schuchart to attempt a block. They exited turn two side-by-side and remained that way down the backstretch.

When they made it to turn three Gravel, again, launched his car into the corner, pulling ahead of Schuchart, and maintained the run off turn four to clear Schuchart for the lead.

He could throw away the runner-up speech. The win at Hartford Speedway was his.

“We’ve been wanting to win so bad,” Gravel said. “Finally getting the win, we’ve been so close. As a driver I’ve let a couple of wins get away. Just happy I can get another win. You never know when your next one is going to be.”

While Gravel celebrated a special victory – which he got to do with Jason Johnson’s son, Jaxx, for the first time this year in Victory Lane – Schuchart had to settle for another runner-up finish.

“That stings a little bit,” Schuchart said. “We had one like that last week, we lost the race at the end and did it again tonight. Last week I feel like I blame that on myself. Tonight, the guys did a fantastic job… We qualified bad, didn’t give up and raced hard all night.”

He didn’t leave Michigan without some kind of win, though. His charge from ninth to second earned him the KSE Hard Charger award.

Sweet also had an impressive charge after getting involved in the wreck – which required his front axle to be replaced and his top wing to be replaced – at the start of the race. He restarted at the back of the field and methodically made his way to sixth-place by the end of the race.

“Had a pretty nasty vibration. I think we bent a rear axle,” Sweet said. “Honestly, a good salvage for us. Hung in there and tried not to shake my teeth out… Luckily, we were able to over come it. I think that’s a good sign for us to overcome that adversity tonight.”

He maintains his points lead over Schatz – who finished third – now 44 points over the reigning champion. Gravel still sits third in points – 130 points behind Sweet.

Gravel’s win at Hartford was his second at track – the first driver to win more than one race at the speedway – his fourth win of the season and 43rd career World of Outlaws win – placing him 16th on the all-time wins list, passing Andy Hillenburg.

“Hopefully we’ll get some more (wins) and get this thing rolling for the month of money,” Gravel said.

The World of Outlaws on Saturday, July 13, will venture to Wilmot Raceway in Wilmot, Wis. for the Badger 40. Get tickets and info.