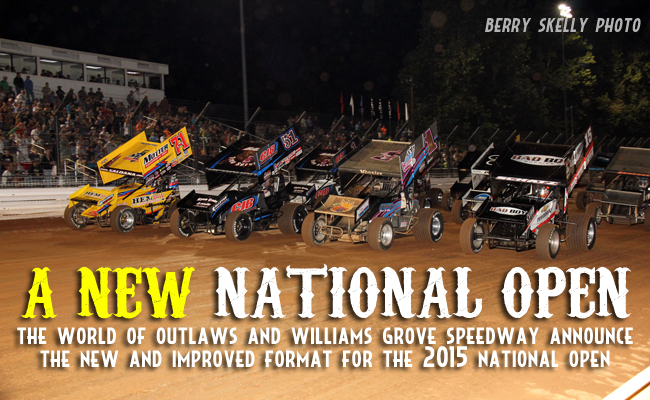 Already one of the biggest events on the World of Outlaws Sprint Car Series schedule, the $50,000-to-win National Open will get bigger this year.

“We are excited to build on the history and tradition of the National Open,” said World of Outlaws Sprint Car Series Director Carlton Reimers. “Williams Grove Speedway is one of the great motorsports venues in America and we are thrilled to continue to grow this event with them.”

The first two nights of the event, Thursday and Friday, will feature a standard World of Outlaws two-flight qualifying format and subsequent show. Each night’s feature will be 25 laps with a $10,000-to-win prize. National Open Event Points will be awarded for final position in time trials, heat races, C main, Last Chance Showdown and the feature.

The new points system will reward drivers for consistency throughout the event and is ultimately used to determine the lineups on the final night of the National Open.

Each of the rest of the races will be lined up by total combined event points with the Dash field setting the first 10 positions in the feature and the Last Chance Showdown transfers tagging the back of the A main. Four maximum provisionals can be utilized on each race night (two for World of Outlaws platinum teams and two for Williams Grove Speedway regulars).

“The National Open is one of the biggest events in the country and by extending it another day, we have the opportunity to make it bigger than ever,” said Williams Grove Speedway General Manager Justin Loh. “The additional day and format change allows us to attract more teams and fans to be a part of this already great tradition.”

Fans are invited to participate in the Fantasy Dirt Challenge during National Open weekend. Participants will choose a team of drivers entered in the National Open and compete against others to earn points and win prizes including gift certificates, tickets and apparel. The challenge is free to enter but limited to the first 1,000 entries. Email [email protected] and provide your name and email address in the body of the email with “National Open” in the subject line to participate. Instructions, scoring information and a selection sheet will be provided as the event draws closer.